Wynton Marsalis and the Jazz at Lincoln Center Orchestra 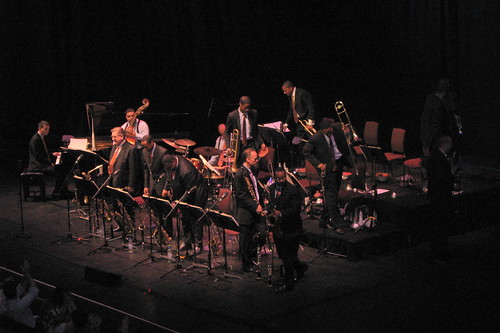 Off to the Barbican to see Wynton Marsalis and his Jazz at Lincoln Center Orchestra perform pieces under the heading Full Steam Ahead.
I saw him perform here a few years back and once again it’s a sold out crowd with just a couple more performances happening in the UK as part of the JLCO summer European tour.
As ever, the set-up is very simple, clarinets/saxophones are in the front, trombones in the middle row, and trumpets, including Marsalis most of the time, are at the rear. To the left of them are a piano, double bass and drums.
Marsalis is nothing if not an educator, and he introduces each piece with a little bit of background history. The Barbican has supplied a free programme, but one suspects that the exact set-list is relatively changeable, indeed Marsalis’ own site suggests that we’ll get ‘selections’ from the Full Steam Ahead repertoire. As a result, I try also sorts of mnemonic devices to memorise the pieces we hear.
For the first half of the concert, it’s pieces either written by, or usually performed by, Duke Ellington. And so we get Across the Tracks, part of the Deep South Suite, Daybreak Express, Take The ‘A’ Train, and The Old Circus Train Turnaround.
After an interval, it’s on to their own compositions and we get Due South, Expressbrown Local from All Rise, and Jump from Jump Start and Jazz, a pair of ballets. Then we finish with the final three tracks from 1999’s Big Train: Sleeper Car, Station Call and Caboose.
For an encore we get a 1925 piece which I think is called “I’m Alabama Bound” and finally end with a great trumpet solo.
All round, a simply wonderful concert with virtuoso performances from his immense band. Wonderful stuff.

Previous Story:
Shock! Horror! Bear Grylls Series Not Quite As Advertised
Next Story:
0330440691