These Boots Are Made For Walking

Look – we all know the fashion business is nonsense. But if there’s one recent trend that’s really annoyed me, for no good reason, it’s the sudden desire for Ugg boots. These Australian made pieces of footwear are, in themselves, perfectly fine (the fact that “Ugg” has been adopted as a trade name, when in Australia it had largely been a generic term is something to talk about another day). In fact, in many respects they’re the most practical examples of footwear around.
But the more I saw people wearing them, the more my mind raced around to try to think why they seemed somehow familiar.
And finally it clicked – they’re the kind of boots that nice elderly ladies have always worn. They’re comfortable; they keep your feet warm on a cold winter’s trip to the Post Office; and they’re cheap.
Well, Uggs aren’t, obviously.
To see what I mean, I went to a site that I thought was probably a good example of where elderly ladies might go shopping – Littlewoods. For years a cheap and affordable catalogue company, like everyone else, they’re on the internet.
So compare and contrast. 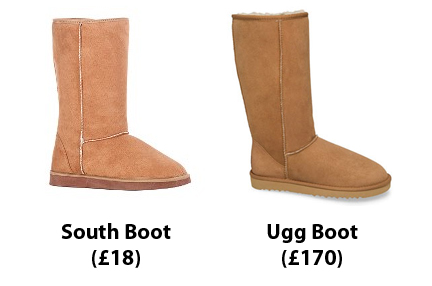 As the caption says, Littlewoods’ South “Norway” High Flat Boots cost £18. They’re available in two colours and in a variety of sizes.
Meanwhile the Ugg Women’s Tall Classic boots, which I’m sure you’ll agree are far more trendy, cost £170. I should point out that the Ugg footwear is a little taller. But you’re not getting a great deal more for a shoe that costs about ten times as much.
But it’s fashion, and the pricing is based on what the market will support rather than value. So I trust that people will continue to rush out and buy the more expensive boots, safe in the knowledge that they don’t look in any way, shape, or form, the same as the nice elderly lady who lives down the street.

Previous Story:
Tricks of the Mind
Next Story:
Making Your Stuff iPhone Compatable