Now here’s a subject that could leave me in all sorts of trouble, because some may have some very strong feelings about it, but it’s prompted by something I heard today.
I was in London, sitting in the sun reading the paper. Nearby a father was playing with his son. He was using DSLR and taking photos of his child.
A charming scene.
Then behind me, another man, sat on his own, also with a DSLR took a few photos. The father realised this and came over.
“Did you just take a photo of him?” he asked.
“Yes,” replied the other man.
“Would you delete it please… That’s fine.”
And then he went off with his son.
Now I suppose that there are one or two fundamental issues I have with this.
On the one hand, if you’re a parent, you’re probably going to be concerned if someone else – a stranger – is taking photos of your children. You’ve heard all the stories about paedophiles everywhere. You don’t want your child being the subject of some pervert with a camera.
But in fact, if you’re out in public, anybody can take anybody else’s picture. Just about every street corner has a CCTV camera collecting video of you, and your kids, never mind stills.
Would I take photos specifically of someone else’s children in a public place? Absolutely not – at least not without asking some kind of permission if the circumstances were what they were today.
Yet I have taken photos of kids in public before. Here’s a favourite I took at the seaside: 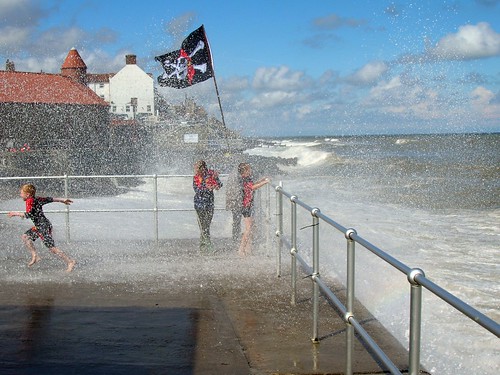 Kids were mucking around trying to avoid the waves as they came crashing in against the promenade. It’s a fun photo.
Should I have asked permission before I took it? Well there were no parents immediately around as I recall, but the image captured something interesting.
Now faces aren’t visible in this picture, but then I was at the Mayor of London’s Festival a few weeks ago, which features a carnival procession. I took lots of photos (I’ve yet to process them) and there were hundreds of kids taking part amid the adults. I’ve got photos of lots of different things. Just about everyone else in the crowd was also taking pictures.
In that instance, you’d be a fool if you didn’t think your child was going to photographed. Indeed I saw photographers posing children to get better images as the various groups processed past my point on the side of the road.
Is this wrong? Is it any better or worse than taking a photo of a child playing?
If you think about famous photos taken all over the world, you might think of images of children playing in bombed out London streets during the Blitz, or kids put to work in third world countries. Did those photographers ask permission of parents? Or have they in fact captured some important historical records?
While, as I say, I can understand the concern of the parent, I worry that it’s a state of things to come – I’m guilty before I’m innocent.
When I’m out with my young niece and nephew at the playground, I love to take photos of them, but if there are lots of kids around, I put the camera away. That’s from fear of being wrongly perceived. And it’s worrying that I think that way. This fear will only get worse.
Interestingly, I also visited the Photographers’ Gallery today, where they have an exhibition by Dryden Goodwin that features images of Londoners, including a series of people on the top deck of nightbuses. He didn’t ask permission; perhaps an image of you is on the wall of a gallery somewhere? There aren’t any kids anywhere, but pictures of people shot from public spaces on public transport or in the street can be exhibited freely.
One final thought. Had that gentleman behind me been a paedophile, even if he had deleted the photo he took, undeleting it later would be exceptionally easy. But let’s face it, he almost certainly wasn’t and just thought that a photo of a child playing on a sunny autumn day might be quite nice.