I’m A Photographer – Not A Terrorist 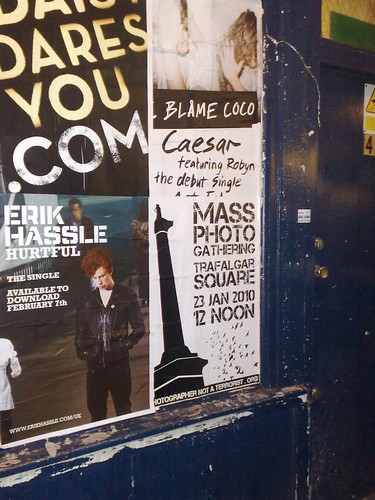 This weekend there’s a (hopefully) big demonstration of photographers protesting against the vast misuse of Section 44 of the Prevention of Terrorism Act (2000).
This essentially allows police to stop and search anyone in a specified area. Since those areas include much of London, that effectively means anybody in the city. Fine. Nobody likes terrorism.
But in practice that has meant way too many innocent tourists, photographers and others being considered “suspicious” just because they have a digital camera.
You probably have a digital camera about your person now. It’s built into your phone.
Are you a terrorist? Should you be able to go about your business taking photos of whatsoever you choose?
This is a free country after all. Or it used to be.
All over Soho I noticed that posters promoting the demonstration appearing all over the place. I certainly plan on attending this weekend.