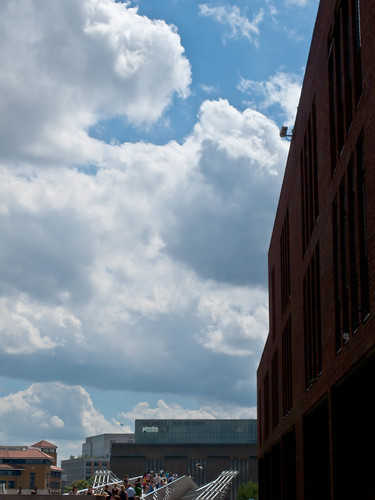 A not altogether succesful photo trying to shoe-horn in a CCTV camera with Tate Modern.
There are a couple of very good photographic exhibitions on in London at the moment that I’ve been to in the last couple of weeks, but both include some quite “difficult” material.
Exposed at Tate Modern, is subtitled voyeurism, surveillance and the camera. It’s a collection of predominantly photographs taken without the subjects necessarily knowing that they were being featured.
Some of the time, that’s street photography – with some of the very earliest photographers devising some clever devices to allow them to record people behaving naturally in their environments rather than posing for the camera. Later it would be less devious and more a question of photographers “grabbing” photos of people. That inevitably includes famous people, and there’s a subset of paparazzi photography on display.
As the exhibition continues, the question of whether the photographer should be allowed to take the photos he or she has become harder. For example, there are a sequence of photos taken of a “gentleman’s club” from a nearby apartment. The photos are shot through windows, and while the subjects aren’t discernible, their actions are. And a selection of photos by Kohei Yoshiyuki taken in a Japanese park using infra red are also questionable – a voyeur taking photos of other voyeurs.
Merry Alpern took video footage of the inside of communal women’s changing rooms. It’s somewhere the camera wouldn’t ordinarily go, and I can appreciate the artisitic merits of the enterprise – I wonder about the ethics of it (the frames from the video used in the exhibition don’t reveal any identifiable individuals). Sophie Calle’s photos include following strangers and documenting their lives in photos which is fascinating. But she also took a job as a chamber maid and rifled through the bellongings of tenants for another exhibition. I wonder if that’d be even legal in the UK?
I guess that these photos do make you question what is and isn’t legitimate. I’m of the opinion that you should be allowed to take photos of what you wish – at least in public. But certain artists enjoy making strangers or lovers their subjects, sometimes in private, and sometimes without telling them. I’d hate to be the person who found out I was a subject idly wandering through Tate Modern.
There’s a lot to like about this exhibition. I enjoyed the elaborately staged photos of Philip-Lorca diCorcia who took some remarkable photographers of New Yorkers on the streets. And Weegee’s photos of crime scenes and stars (or more usually, starlets) are fun. I loved a sequence of photos made by Emily Jacir who stood in a square in Linz, Austria, each day at 6.00pm to insert herself into a webcam image taken at that time.
The area I don’t think the exhibition was altogether successful with was the surveillance aspect. There were videos from various weapons and planes, and photographs based around the surveillance used in Northern Ireland during the height of The Troubles. But the current day obsession with CCTV didn’t seem to be fully explored. Maybe nobody’s working in this area, but it strikes me that there’s room for something really interesting in this arena that we’ve not yet seen.
I did enjoy the little postscript piece. Outside the exhibition, a bank of monitors were showing, what looked like the interior of an empty Tate Britain – a few miles upstream of Tate Modern. Briefly glimpsed if you stared at all the monitors simultaneously, was an animal – perhaps a small dog or fox – running through the empty galleries.
The exhibition is well worth a visit if this subject interests you – and street photography, as well as the growth of surveillance, do interest me. But I’m not convinced that it’s 100% successful. What it does do is make you think about the rights and wrongs of some artistic endeavours though.
Also worth a look at Tate Modern is the Francis Alÿs exhibition. The work of this Belgian born artist seems mainly to be based in Mexico and Latin America, and large chunks are video based. I’ll admit that I didn’t spend long periods watching the videos of things like a block of ice being kicked down the street, or kids skimming pebbles across water. The tornado video was very good, and quite scary – basically Alÿs is holding a video camera and trying to run into the eye of a tornado.
Over at the Photographers’ Gallery, Sally Mann is getting her first major UK exhibition. Again, signs warn you that some of the photos might be difficult for some viewers. Mann uses old cameras and techniques for making her photos giving the pictures an ethereal quality.
Broadly speaking her subjects in this exhibition are her children, sites of battles from the American Civil War, and dead bodies. It’s the latter that gets the warnings, as sometimes these bodies are decomposing – she was working with a research facility in the US. But perhaps modern viewers will find some of her childrens’ pictures more difficult. In a world where there’s a suspected paeodophile on every corner, we’re conditioned to react against photos of naked children – recall Julia Somerville’s treatment when she had some photos developed at Boots of her seven year old daughter in the bath.
The places she shoots her photos in are incredible, and the backdrops seemingly idyllic. The photographic process she uses (which is documented in a film looping in one of the rooms) definitely add to that idyl. The otherworldliness of the imagery is brilliantly employed in her Deep South series.
Again – well worth seeing before 19 September when the exhibition closes.