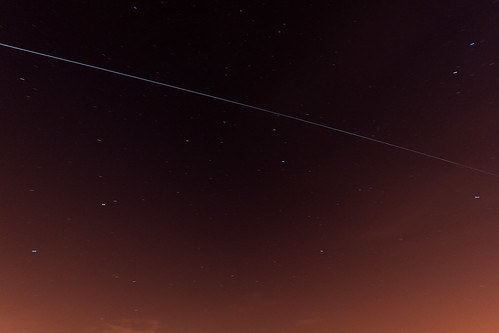 The International Space Station (ISS) is very visible at the moment, appearing as an often very bright, yet very fast-moving star.
Taking advantage of a location that has much less light pollution than home, I took the above long exposure photo this evening showing the transit of the ISS across the sky, passing through Leo. Interestingly, it was preceded by another visible object that seemed to be following exactly the same trajectory as the ISS. This, I believe is the ISS Progress 41 cargo craft which was undocked earlier in the morning. It’s currently being kept away from the ISS before being sent into orbit for a burn up.
The photo doesn’t show two objects as they did follow the same trajectory across the sky. But I think my explanation makes sense. Note that the photo is a 2 minute exposure – hence the short star trails visible in the night sky.
A handy site called Heavens Above is excellent at letting you track when and where you can see satellites, the ISS, and other objects from your local location.
There are more possible views over the next few days, and with any luck, the double-dip of the cargo craft and ISS in one viewing should be good.
The next question is – will we really be able to see Space Shuttle Endeavour in a week’s time?