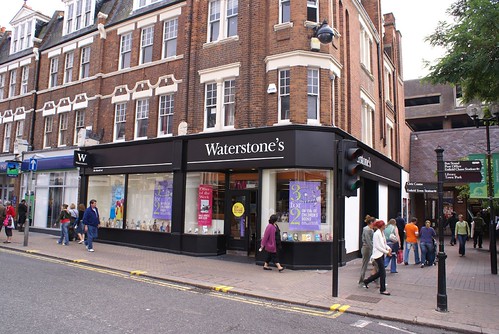 Two interesting developments in the book world in the last 24 hours:

Waterstones has been sold by the slightly ailing HMV group for £53m to Alexander Mamut’s A&NN Group, and James Daunt (he of Daunt Books fame, the renound tote-bag selling bookshop) will run it. That suggests that it’s going to concentrate on its core offering – a good range of books.
In the meantime, Amazon.com has announced that in the US, the company is selling 105 Kindle books for every 100 paperback and hardback books it’s selling. And importantly it has stripped out free books. That’s important because when I glance at readers’ Kindles on the tube, I’ve noticed a significant upsurge of interest in classics based largely on the fact that they’re free and everyone likes free.
In the UK, Amazon.co.uk says that it’s selling Kindles to hardbacks on a ratio of greater than 2 to 1. Of course, many Kindle books are priced very cheaply – at below paperback prices. So while I wouldn’t belittle that number, I’d put it in context. On my decidedly middle-class railway line, I see an awful lot of commuters reading Kindles (far more than using iPads for example).
We’re at something of a fork in the road. Our libraries are being whittled away, and this is a last chance for a major high-street book chain to survive and even prosper. If bookshops do disappear, they’re unlikely to reappear. While your supermarket sells a selection of top 20 titles (I bet they’re stocking that Maddie book), that’s not enough. Russian oligarchs are all well and, um, good, but even they probably demand an eventual return on investment.
There’ll be pockets of bookshops that will always exist. The aforementioned Daunt Books will be fine. But its main branch is located on Marylbone High Street (with other branches in those not-quite-destitute parts of London – Chelsea, Holland Park, Belsize Park and Cheapside), while other independents will get by. But without a Waterstones – or even a WH Smiths – many towns and cities will have nothing of note.
I’ve seen the future, and I’m not altogether sure I like it.
[Addendum] I see that in the US, John Malone’s Liberty group has made an offer to buy the troubled US book retailer Barnes & Noble. Is there life left in bricks and mortar stores?