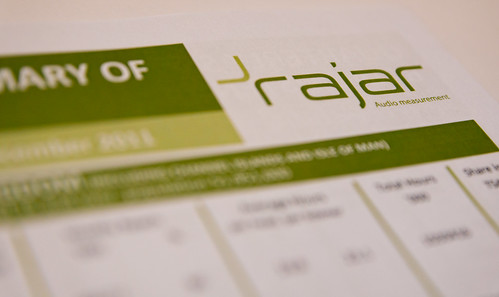 As the long nights begin to draw in, it’s time for RAJAR again.
There has been a not insignificant amount of uncertainty as to what this quarter would bring, as it covers the Olympics and Paralympics (the Euros mostly fell in the previous quarter). The big question was what impact – if any – they might have on radio.
We know that there were record TV audiences for the home games. BBC1 and BBC2 were up nearly 26% on the previous August, while overall viewing was up across July and August. If there’s one certainty with radio listening – it’s that if TV viewing goes up, radio tends to get hit.
Radio listening did fall overall during the quarter. Although 89% of the population (47m) listened to the radio, the time they spent listening did fall 1.0% on the quarter. The average adult who listens to the radio listens for 21.9 hours a week or 3.1 hours a day.
The share of listening between the BBC and commercial was essentially unchanged on the quarter, with the BBC having 54.2% and commercial radio having 43.3% (the remainder being made up of non-RAJAR measured services such as community radio as well some internet radio). In London, last quarter’s “aberration” that saw the BBC overtake commercial radio in London, was reversed, and we were back to commercial radio representing 51.3% of listening while the BBC has 45.3%.
You can look elsewhere to get the full list of stories, but notable things that I’ve seen in this RAJAR include:

So here’s that digital listening laid out since the measure began to be measured.

I think what’s fair to say is that although digital listening has flatlined a little this quarter, the growth is continuing in the longer term, and that’s certainly true year on year.
Within digital listening, there was a big boost for the internet last time around. Again, that’s fallen back a little this time around. Given the continued growth of smartphones, improvements in broadband, and growth of internet capable devices like tablets, it would be a rash man who didn’t honestly believe that this is likely to continue. Again, the growth is marked over the longer term.

And it’s been a while since I last looked here at digital listening by station, so here’s the latest update:

It shows that while digital listening to Radio 1 overall is quite low, it has one of the highest shares of online listening. On the other hand Five Live is the most digital of the BBC’s main networks. It’ll be worth keeping tabs on the internet portion of this chart in coming RAJAR surveys now that the BBC is rolling out its own mobile apps. I suspect that amongst younger listeners in particular, these will prove popular.
Recently, Ipsos MediaCT hosted an event looking at radio research in particular. One of the really interesting stats highlighted at the event, was the amount of a station’s overall listening that listeners to the breakfast show represent. It’s a lot.
Look at the chart below. What it says is that 72% of all Absolute Radio’s listening hours come from people who listen to the breakfast show. In other words, only 28% of the station’s listening hours come from people who don’t hear Christian.
And if you look at some of the other big BBC breakfast shows, like Chris Moyles, Chris Evans and even the Today Programme, they all account for even more station listening. A big breakfast show really is important. OK – we all knew that anyway.
But then look at Capital. They’re a Dave and Lisa aren’t quite as important to the overall station performance as some of the others. Perhaps that’s because Capital’s more about the music proposition that the personalities? That’s clearly the case for London’s new number one station. Whisper it if you know Neil Fox, but clearly Magic’s hours come more from people who don’t listen to breakfast than those who do. In other words, the station is clearly built around it’s music rather than presenters.

Anyway, something a bit different.
Finally, of course I couldn’t fail to update my regular RAJAR interactive chart.

But click here to view it properly.
And be sure to read the notes underneath the full sized chart. They highlight the strengths and weaknesses of it, and explain in a little more detail how to use it.
Full RAJAR results are available on their website, and try their app on your mobile device.
Absolute Radio’s press release can be found here.
MediaUK will have quickly updated data with lots of charts, and James Cridland has some thoughts.
Radio Today will have lots of the key RAJAR stories.
Matt Deegan’s take including a worthwhile analysis of 6 Music v Xfm.
Paul Easton has his regular analysis.
Media Guardian has a couple of RAJAR stories from John Plunkett.
Source: RAJAR/Ipsos-MORI/RSMB, period ending 16 September 2012, Adults 15+.
Disclaimer: These are my own views, although they’re based on work I’ve done for Absolute Radio, and through whom I get access to the data. I also sit on the RAJAR Technical Management Group representing commercial radio. Just so you know.