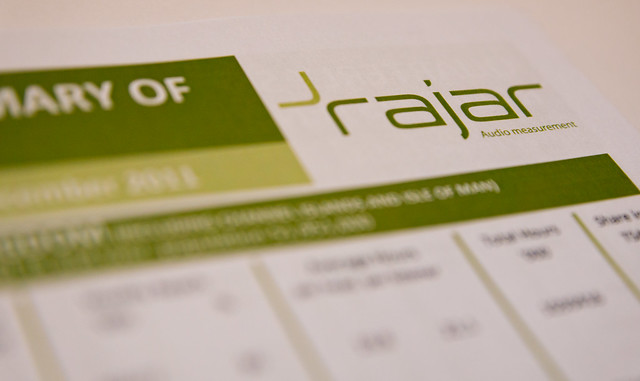 By the way, I’m certain that both BBC, and indeed commercial groups that have stations that target this demographic, are doing what they can to stem the flow. It’s in their interests after all. But we can’t pretend that YouTube, Spotify, Rdio and now Google, aren’t all having some kind of effect on radio listening. We need to try harder as an industry.
Finally, let’s get back to my usual Google Motion Chart which I’ve updated again.
The first is the national picture. Although I’ve now increased the space on this blog which allows these charts to be bigger, I’d still recommend that you play with the larger version of the chart.

[Update] I’ve added back a London version of this bubble chart. You may find it easier to use the larger version, but it’s worth noting that there are a few more demographics in the London version of the chart including ages and digital listening! So do play with the different variables available and don’t just stick with the default state which usefully displays Reach v Reach %.

For more on RAJAR visit:
The official RAJAR site
Radio Today for a digest of all the main news
Media UK for lots of numbers and charts
One Golden Square for more Absolute Radio details
Paul Easton for analysis
Media Guardian for more news
Matt Deegan usually has plenty to say

And there are always RAJAR Smilies
Source: RAJAR/Ipsos-MORI/RSMB, period ending 31 March 2013, Adults 15+.
Disclaimer: These are my own views, although they’re based on work I’ve done for Absolute Radio, and through whom I get access to the data. I also sit on the RAJAR Technical Management Group representing commercial radio. Just so you know.
[Amended to correct a fact about Absolute 80s]