I spent Christmas with my family – as many other folk do. But the room I was staying in didn’t have a radio! Now this is a calamitous state of affairs in my book. There wasn’t a spare kicking around. And while I carry a portable, it doesn’t have a speaker.

No problem – I shall just buy a cheap DAB radio and “gift it” to the room. There was a nearby Argos, so off I trotted.

Now I’d probably argue that the long-term future of radio-only devices is limited. Most of us are looking for multi-functional audio kit these days. We perhaps expect to be able to stream audio from our phones to devices via Bluetooth, and even charge them. But there’s still a call for radios. They do a job, and they [usually] do it well.

In this instance, a simple radio met the bill. Ideally something that didn’t sound terrible. But nothing pricey. I chose a Bush model from the Argos catalogue. Not a name brand like Roberts or Pure, but cheap and should do the job. It didn’t even look too bad. Note that it was £29 rather than £59 when I bought it, and it was in stock (a vital requirement).

And then I got it home and turned it on. At least I tried to turn it on. You see, none of the buttons on the front seemed to be the on/off switch. There are no buttons on the sides or the top. But around the back just beyond where the power cable goes into the radio, there’s an on/off switch.

That’s right, some complete idiot decided that perhaps the single most important switch on the whole device, should be hidden away around the back. You have to reach past the power cable, which is in line with it, to get to it.

This is a button which you need to use every time you use the radio!

You can see it at the bottom of this picture. 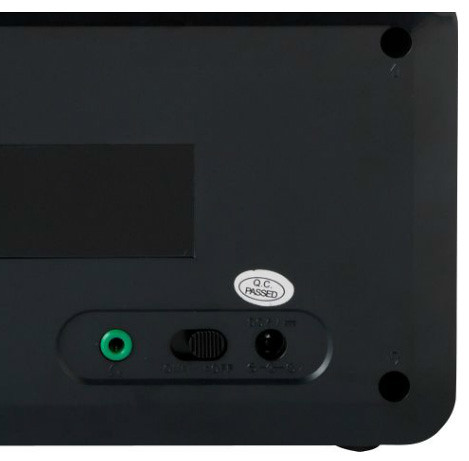 If it hadn’t been the run-up to Christmas, I would have returned it. But I just couldn’t be bothered. It’ll hardly get used anyway. But that’s not the point. There are 11 buttons on the front of the radio (more than needed, but not necessarily well laid out), any one of which could have been used for the power button.

As others have noted, having a button which tells you the frequency of the multiplex you’re listening to is not really a consumer feature, yet we offer it – up front and central. Whereas in this instance, a power button is hidden away.

It’d be easy to blame it on engineers. But that’s unfair to engineers. This is just idiocy.

(In terms of performance, it’s fine. It quickly picked up all the expected multiplexes and services, and the sound was average which is all you’d expect at this price point. But I’ve certainly heard worse. The select button is not particularly close to the up/down buttons. But you’re not going to buying this radio anyway.)

Incidentally, Bush is not the only purveyor of bad design. When I had a moan about this radio on Google+ (I do occasionally use it), someone else replied that they weren’t happy with the confirmation required to switch off the device on the Pure Evoke Flow.

Previous Story:
The Cathedral of the Marshes
Next Story:
Down The Line