The Years of La Dolce Vita 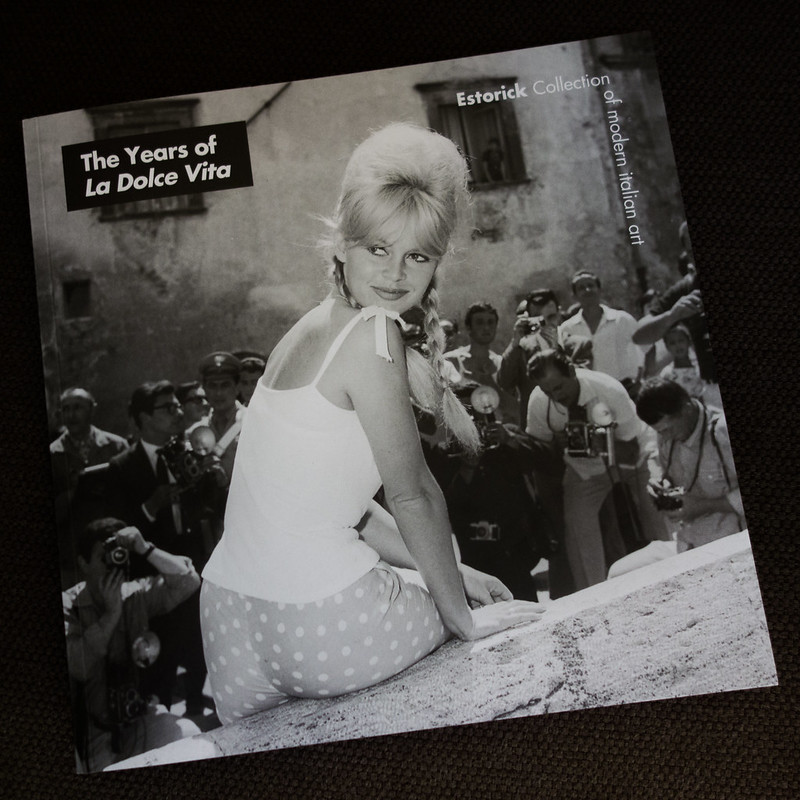 There’s no doubt that La Dolce Vita is one of my favourite films of all time. The glamour and sophistication of Roman society is there in gorgeous black and white. And it seems that the film actually helped develop the world which it depicted. Rome’s famous Cinecittà studios were perfect for big Hollywood productions such as Ben Hur and Cleopatra, and it was also cheaper than shooting those types of films in Hollywood.

This all meant that by the time the sixties were upon it, Rome was full of a mixture of European and Hollywood movie stars mingling and mixing around Via Veneto.

A new exhibition – The Years of La Dolce Vita – has just opened at the Estorick Collection in Highbury. And it’s fabulous!

It’s made up of photos primarily shot by Marcello Gepetti, one of the undoubted inspirations for Paparazzo the photographer in Fellini’s film who of course gave us the name paparazzi. There are also photographs, largely taken on set at films including La Dolce Vita, by Arturo Zavattini, the film’s cameraman.

The first thing that hits you when you walk into the gallery is the glamour of the age. “Sophistication” really doesn’t do it justice. From the massive blown up picture of Bridget Bardot looking over her shoulder, to Audrey Hepburn walking her dog along a Roman street, this was a time you want to have lived in. Geppetti’s photographs, taken from a collection of over a million, reveal a fun side to proceedings: Rita Hayworth, Jane Mansfield, Raquel Welch and Marcello Mastroianni are all having fabulous times as they’re snapped.

But then you begin to see beyond the “glamour.”

It’s pretty obvious that few of these photos were taken at pre-arranged press calls. There are one or two, and Geppetti loves to get on the other side, shooting a star with dozens of other photographers shooting the reverse version in the background. But most of these shots are on the streets, coming in and out of restaurants and bars – indeed at the tables themselves.

A picture of Audrey Hepburn, her head wrapped in a scarf and looking down in a bakery, makes it obvious that she was not really seeking attention at the time. A second photo of her on the street in the same clothing suggests that Geppetti was trailing her around the city. Not especially pleasant one suspects.

Not every face is smiling at the camera when they’re caught. You begin to think that the photographer had probably just jumped out from an alleyway or something to grab the photo.

But you begin to console yourself that at least they’re not as bad as the paparazzi we have today. Then you see a long lens photo of Bridget Bardot sunbathing topless in her own villa. Remind you of anything? And one of Geppetti’s most famous images is of Elizabeth Taylor and Richard Burton kissing on a boat deck in Ischia. The photo (bottom image) became iconic.

Another photo shows a young actress being carried away after fainting. There’s no polite way of putting this, but today we’d call that an upskirt shot. I’d be amazed if it was used at the time, and I’m certain the actress would have been mortified.

The exhibition actually ends with a number of photos of other photographers being attacked. Perhaps the best is a sequence featuring no less that La Dolce’s Vita’s very own Anita Ekberg. She actually points a bow and arrow at a photographer she’s trying to stop. This wasn’t always fun.

All that being said, I’d still thoroughly recommend going to see this exhibition which is on until 29 June. It’s a remarkable record of what must have been a whirlwind of a time.

While I was in one of the galleries, an elderly couple – late sixties or early seventies – entered the room, and he wondered aloud, “Now, was I there?” as he looked at an image of Via Veneto. At first I wondered if he expected to see himself in the shot. By now he was loudly telling his wife, and the rest of the room, that he’d been in Rome in 1965/6 (“You’ve told me,” said his wife), where he’d seen Jack Valance on a swing. He’d had to buy himself a suit so that he’d “fit in.” I moved on.

As well as the Guardian piece I’ve linked to a couple of times above, they have also published a selection of photographs that appeared in their centre spread in yesterday’s paper.

Now I must rewatch La Dolce Vita and L’Avventura.