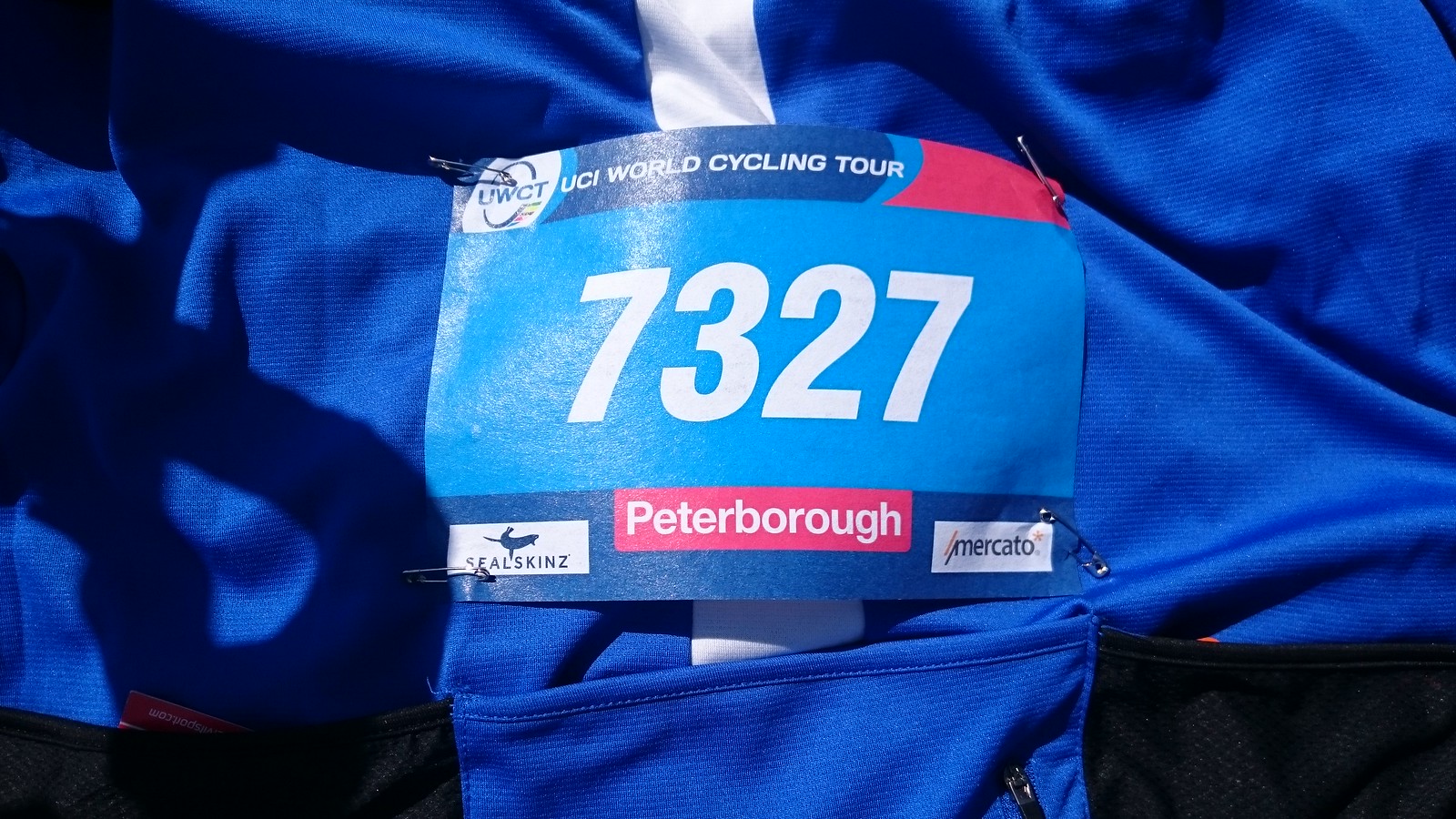 That’s what the chap on the public address tannoy kept telling us as we queued up in our pens for Sunday’s start of the UK’s first ever Gran Frondo.

Technically it was a race. And those keen club riders were in a front pen which would be let off first and have Shimano neutral support vehicles helping them. Dependent on timings, they would get UCI qualification points towards something bigger further down the line. The bulk of us, however, were in a second pen which was more akin to sportives. That is, highly organised day rides with lots of assistance and in particular drink and food stops. The only person I’d be racing would be me.

In any event, even if I had wanted to “race” we were released a minute or so after the elite riders, and since there were around 6,000 of us in total, it took a couple more minutes to get past the start gate.

This was actually my first sportive. and I was riding by myself. Although the race started from Peterborough Showground at midday, it still necessitated a 6am wake-up followed by a twenty minute ride to a remote station (my line wasn’t running due to engineering), two trains, another thirty minute ride and then a pre-10am registration.

To be honest, they could have sent us our details in the post. But there were concessions open, and they obviously didn’t want 6,000 people all showing up with about 15 minutes to go. Since the route from the station to the Showground was fiddly (although nice, if you took the cycle paths), a few of us stuck together with a combination of scribbled help and Google Maps.

Once check-in had been completed, there was quite a lot of sitting around to do. There were stupidly long queues for breakfast or coffee. I’d had an early breakfast before I set out, although it would be approaching lunchtime as we set off.

Finally the race was on. And even though I wasn’t “racing”, everyone set off at a really decent pace. I found myself easily averaging over 30 kph. To put this in context, I usually ride at around 23 kph when I’m on my own. But this was a flatter course, and there were lots of people around me. That said, I actually did a very limited amount of slip-streaming over the course of the day.

The thing to note about the route was that it was flat. Very flat. I’ve ridden in Cambridgeshire a fair bit, but in the part around Cambridge itself. This route was mostly amidst the Fens. And the Fens, unsurprisingly, are pan flat. The Fens are a very remote place. You need to travel miles to reach the nearest town. The race coming through therefore represented relatively little disruption. They are a fascinating and beautiful place. I suspect that life out there is quite unlike other places. Because the area has been artificially reclaimed, the roads are straight – very straight. They’re often called droves, and we would find ourselves cycling mile after mile with barely a kink in the road.

A key thing about this event was that it was a closed road event. Fully closed road events are relatively rare in the UK, and the organisers promised that as long as people kept a reasonable pace up, they’d stay closed.

What that meant in practice was that the locals came out in force to applaud riders as they came through. Many families seemed to just set up some deckchairs by their front gate and cheer people on as they rode past. Pubs seemed to be doing good business along the route too.

The first drink and food stop was in a very curious place – the old Alconbury airfield. It was closed as an airbase in 1995, and today seems to have industrial units and is also used as a mass storage area. There were hundreds of lorry trailers parked and many brand new cars stored there. We zig-zagged through the site until we ended up on the main runway, and rode a mile down it, the heat of the day causing shimmering in the distance. We then turned around and rode up one of the taxiways.

It was around here that I first noticed what would become a steady number of accidents. While I never saw one happen myself, it was clear that they were happening for one of two reasons. Either people weren’t seeing problems on the road – unexpected speed-bumps for example – perhaps coming as they were drinking from their bottle. Or they were being clipped by passing bikes. Early on in the event I kind of understood why there was a fast-moving train of bikes coming through – perhaps a group of club riders had been further back in the pen and wanted to get a good time. But I was confused to find with 30 km left, there was still a steady stream of them. Were they taking really lengthy breaks? (I was stopping for ~ 5 mins each time).

And you could also tell if someone was rearing up with deep-rimmed wheels. They make quite a noise as they come through. Whether or not they were smart to use in the windy Fens is another question.

I didn’t have any issues myself, but the likely causes were fast chains on the right running into inexperienced riders who weren’t riding in straight enough lines. There usually seemed to be first aid on hand, but it certainly made you want to be cautious.

While as I’ve mentioned, the course was flat, the big issue out in the Fens was the wind. It was a very clear day, and the temperature was comfortable. But there was wind. It wasn’t obvious when you were riding along hedgerows. But basically there are no hedgerows to protect you. Indeed, you’re riding slightly higher than everyone else in the landscape.

As I mentioned, only occasionally did I manage to hook onto others – they were either going too fast for me or too slow. So for a lot of those exposed roads, I ended up going down on my drops to minimise air resistance as much as possible and just ploughed on doing my own thing.

Near enough everyone was on a road bike, but there was at least one tandem that I saw regularly. Usually it overtook me, before stopping at the side of the road allowing me to overtake it, then it’d happen again. I noticed that both riders had their own GPS units, I guess because the rider at the back doesn’t have the greatest view ever. There were also a lot of upright bikes. When I was still seeing them with just a few kilometres to go, I was full of admiration. As I’ve mentioned, the wind made me want to keep a low profile.

There were three stops along the course, although I didn’t know we’d be getting the third. But I did need the stops – if only to stretch my legs a little. Because it was flat, you were pedaling the whole time as opposed to working on a climb and then freewheeling down it. There was very little freewheeling.

We returned into Peterborough, and I road the last few kilometres at over 30 kph, even putting on a sprint finish (in retrospect “sprinting” at 500m to go was not sensible).

Over the line in 4:47 according to my Garmin, although my official time, which will include my three stops, will be higher than that.

There was a little confusion about where you had to go to collect your medal, but eventually I got in the right queue. Subsequently I read that some people felt roads were opened too early, and that the first food stop shut down too soon. Maybe it was as well that I headed off out fast?

On the plus side, it seemed well organised, and it was a good day out. Using the entire road is a wonderful privilege.

Previous Story:
Risk
Next Story:
The Champions’ League – Part One