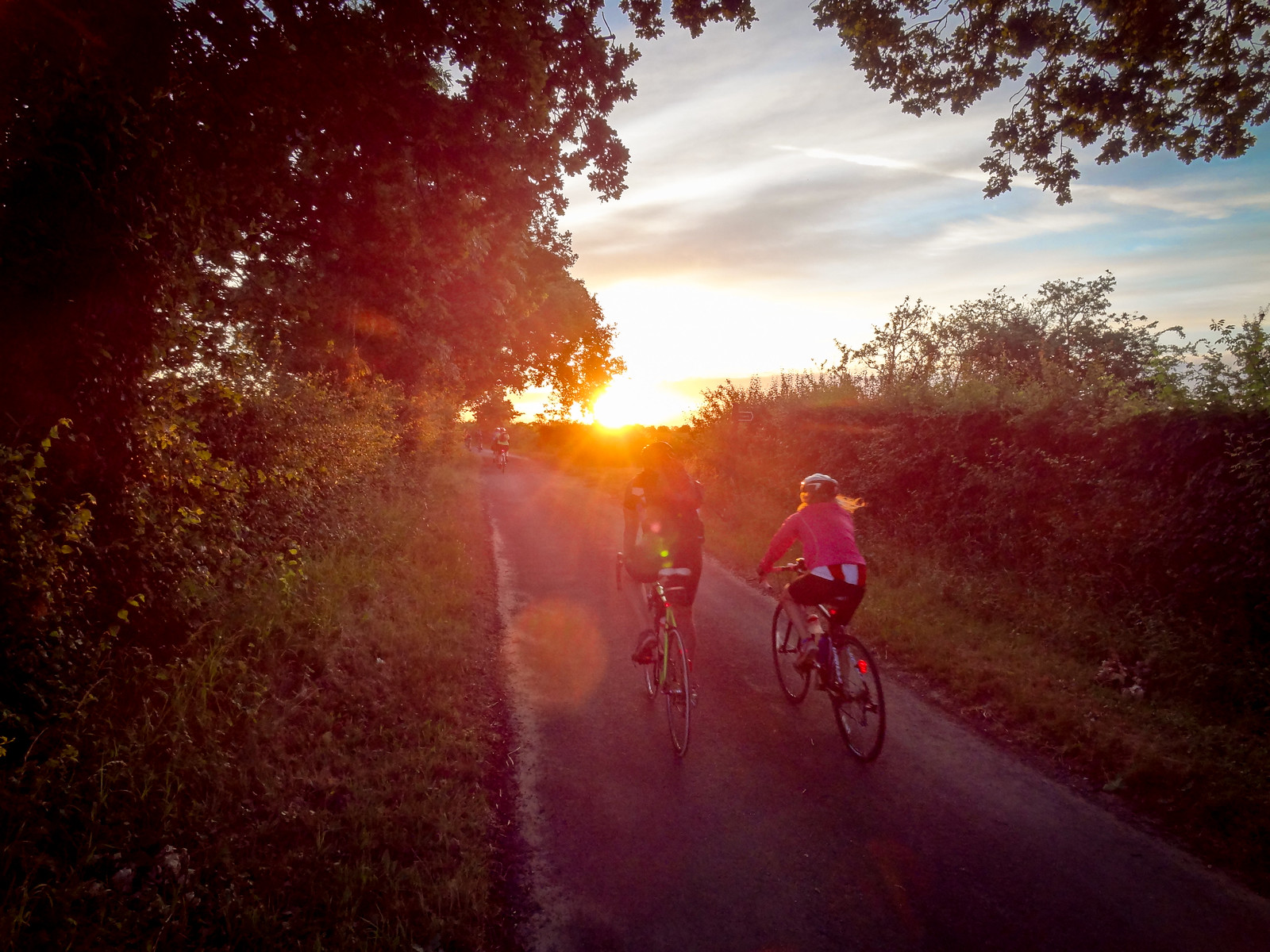 The Dunwich Dynamo is the stuff of legend. Well sort of. It began in 1993 when some cycling messengers organised a fun-ride to the Suffolk coast. It’s now turned into a big turn-up-and-ride event taking place in July over the closest Saturday/Sunday night to a full moon. Everyone meets in London Fields and then heads off as they choose, heading out through London, Essex and then Suffolk to the village of Dunwich situated between Aldeburgh and Southwold. It’s also close to Mimsmere – recently home to Springwatch!

The “Dun Run” takes place over night, and riders are completely self-supported. But there are places to help out. Over the years a variety of pubs, village halls and wayside stalls have been set up to provide food and drink to riders.

I’ve been wanting to do the Dunwich Dynamo for years, but either had chickened out because of the length – 182km/113m – or had failed to organise transport back. The latter is a big issue because there really isn’t a great deal of public transport in the area. There is a local train service about 5 miles away, but it’s tiny branch line, and the operator has now banned bikes using it on the day of Dun Run since it gets too full of bikes. The other option is to cycle another 30 miles to Ipswich where you can get a mainline train. This year Abellio Greater Anglia laid out additional space for riders who took this option.

If you don’t have a willing partner to pick you up, or haven’t deposited your car in the car park the day before, then you’re best bet is the coach back. But tickets do sell out.

There’s one final option of course – turn around and cycle back. This wasn’t an option for me.

This year I made certain to buy a ticket early, along with a couple of friends. 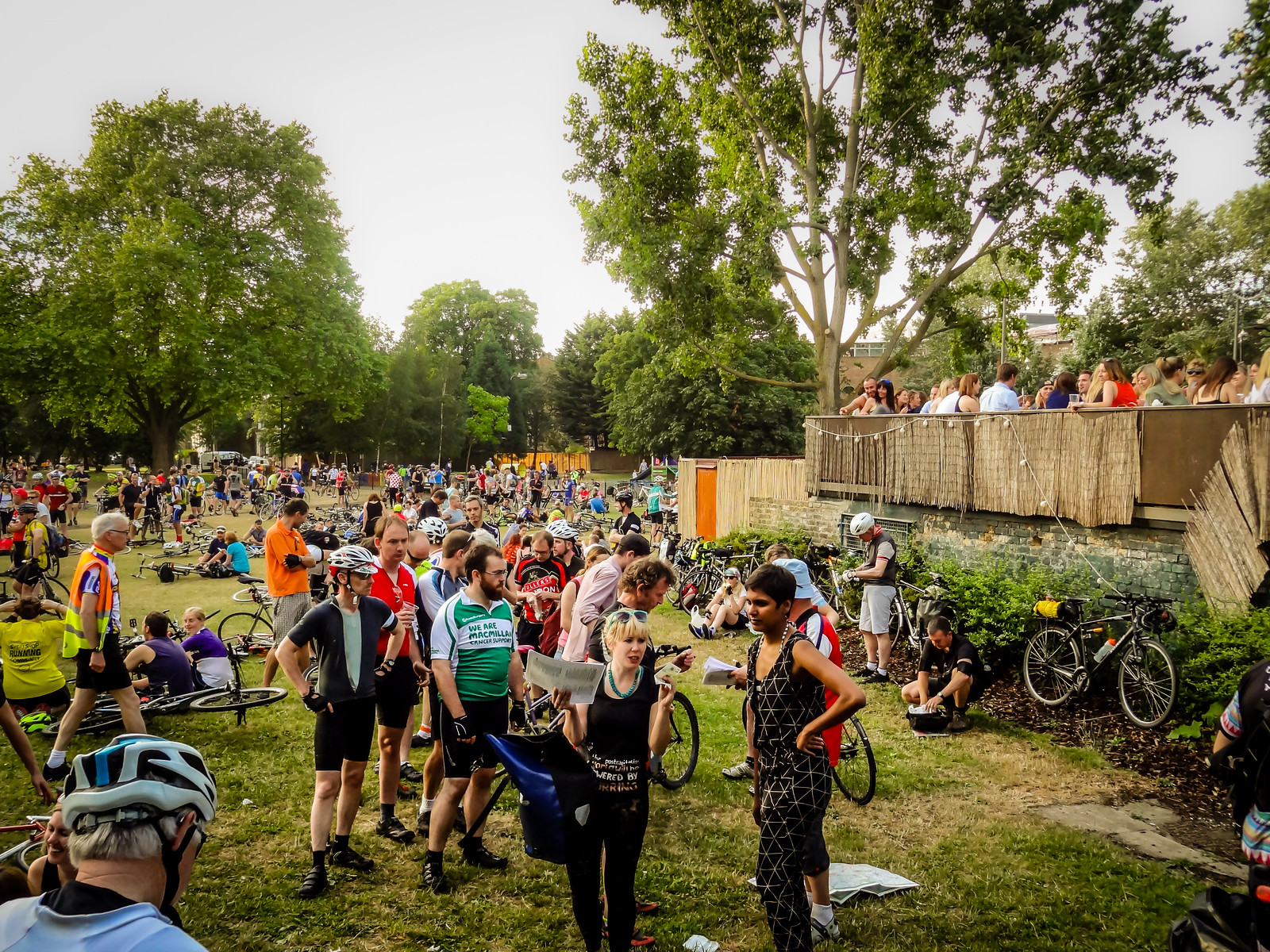 In the end one friend pulled out due to injury so Michael and I met up in a packed London Fields on a hot Saturday afternoon. There you can pick up a route map, which I did. While I’d uploaded the route to my Garmin, my concern was keeping the battery alive for the whole route. I had a USB charger to help me out. Either way, a paper backup is useful.

Just after 8.00pm we headed out. The route through Hackney and onwards out of London is easily the worst part of the route. You face heavy Saturday traffic, bemused and even irate drivers, and traffic lights everywhere. It’s slow going snaking through the traffic, and it’s not until you get over the North Circular and head out through Woodford that it becomes a little easier. Indeed I could quite as easily have met the route somewhere out here rather than travelling in and out of London. But that would seem to be cheating.

Then it’s out through Epping Forest and through the town itself, roads I know reasonably well.

Soon you’re in proper countryside. But the sun is setting and it’s getting dark. The road is now an endless stream of blinking LEDs. The route is fairly flat, and what hills there are start to sneak up on you since it’s so dark. You begin to think about eating and drinking regularly.

Last year, as several people told me, it was raining for much of the “Run”. But we were having good weather, and it was pretty mild. This was as well, because I had stupidly forgotten my arm warmers.

What to wear and what to bring are reasonably big questions for any Dun Runner. And people go about things very differently. Some travel as light as possible – perhaps a spare tube, pump and a couple of tools shoved in a jersey pocket. Others go fully-loaded – with backpacks, panniers and all things in between. I was doing the ride on my racing bike and didn’t fancy slogging through the countryside with a pannier, so had stuffed jersey pockets. The one additional thing I had was a large Ortlieb saddle pack. This took the contents of my usual saddle-bag, but also had space for a bit of extra food, a rain jacket, a microfibre towel, and a pair of swimming shorts. I was able to hook a couple of LED lights from the back of the saddle pack. I found it useful to have two lights on the front and the back – again to ensure that I had enough battery life to get me through the night.

Many of the pubs along the route get late licences especially for the Dun Run, often cooking up food late into the evening. Many cyclists stop at these pubs – it is a social event after all. However in my case, I didn’t think pub-stops were a good idea.

Our first proper stop was in the village of Sible Hedingham, where the locals regularly open their village hall for late night food and drink. Outside, you can fill your bottles of water free of charge, and they have toilets available. The turn-off to the hall can be easy to miss, and despite a helpful person telling me to turn right at the bottom of the hill, many swept on round to the left, keeping their momentum up. I doubled back and met up with Michael who’d been ahead of me a fair bit during this part of the route.

Refreshed and rested we headed on into the Essex night. It was now gone midnight, but inital qualms about tiredness didn’t seem to be an issue. I’d meant to catch forty winks during the day, but hadn’t. Would I feel tired later on? Keeping the food and gels going was the way to avoid that.

If you read what others have written about the Dun Run, you’ll know that it is possible to go the wrong way. And somewhere in Sudbury, we did just that. A whole group of us gathered at a roundabout when it was clear we’d gone wrong. I retrieved my GPS from pocket where it was charging, and helped direct people back onto the correct route.

At later points when I was at a junction waiting for Michael, I’d regularly shout at people who’d missed the turning. “Fairies” do go out and either chalk the directions onto the road, or leave little candles in jamjars to indicate the right route.

We stopped later on at a roadside set-up where drinks were being sold. A warm cup of tea was good there. We’d also worked out that we were making good time, so didn’t want to go too fast as it might lead to hours of sitting on the beach in the cold.

The best stop along the route was at Helmingham, where they sold bacon rolls, gave free tea and coffee out in return for Air Ambulance donations, and even had a yurt that weary riders could sit in. 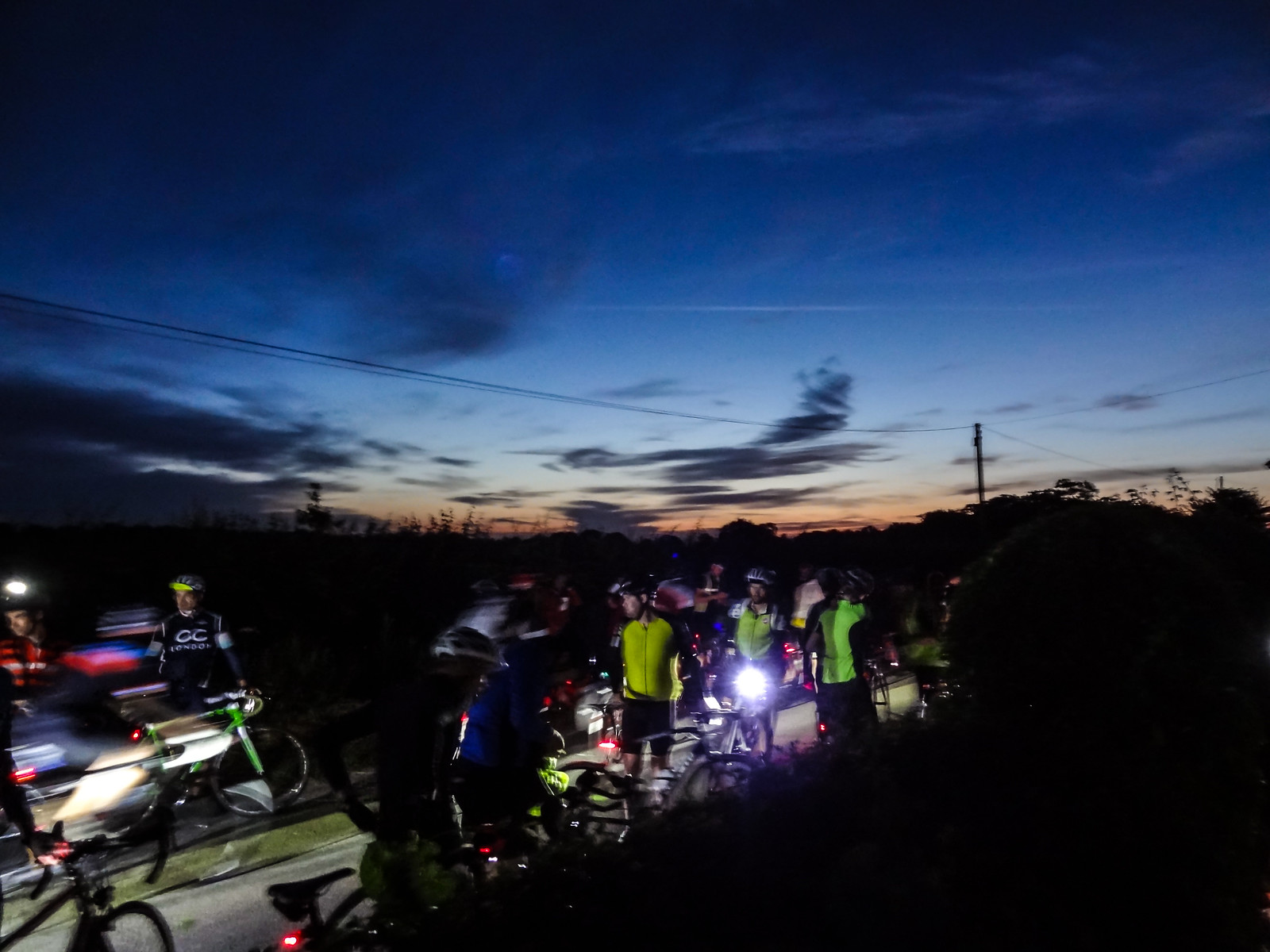 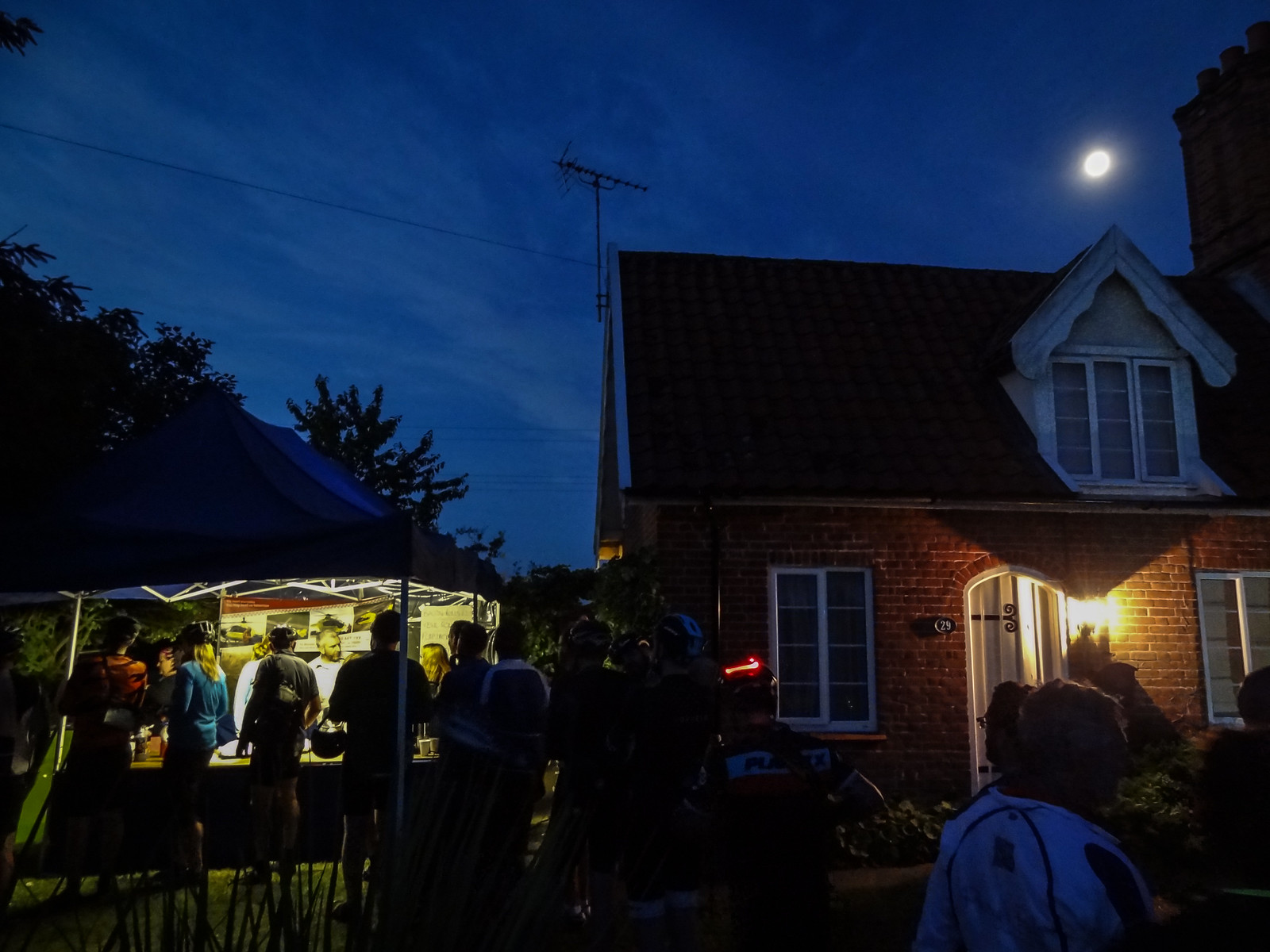 From there we ploughed on towards the end as it was beginning to get light in the pre-dawn, and the dawn chorus was in evidence. I had a second wind (possibly down to eating energy products) and was flying now – up hills in particular! But Michael was finding it a bit tougher going.

But we both kept going, buoyed on by the sun finally rising. 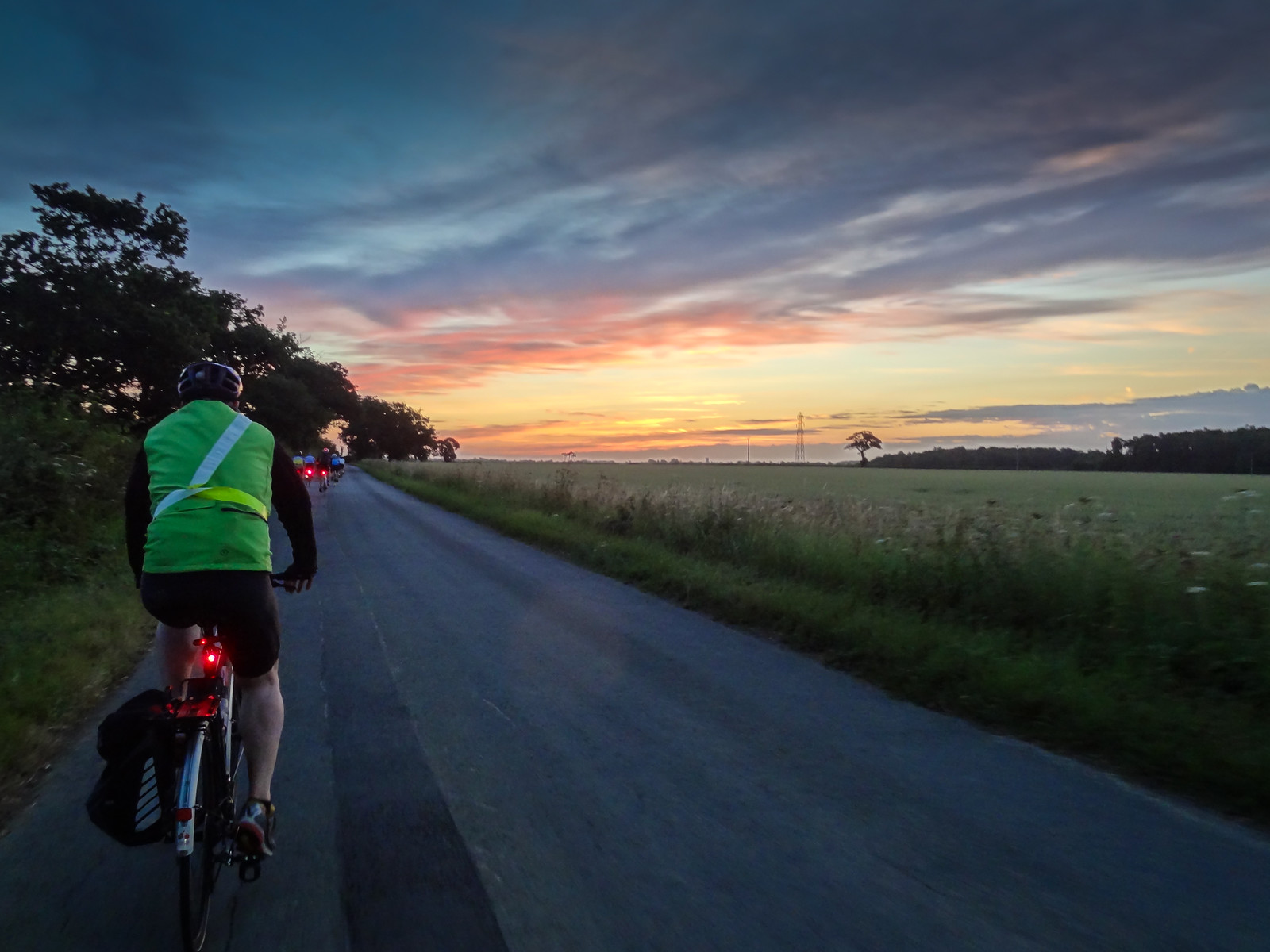 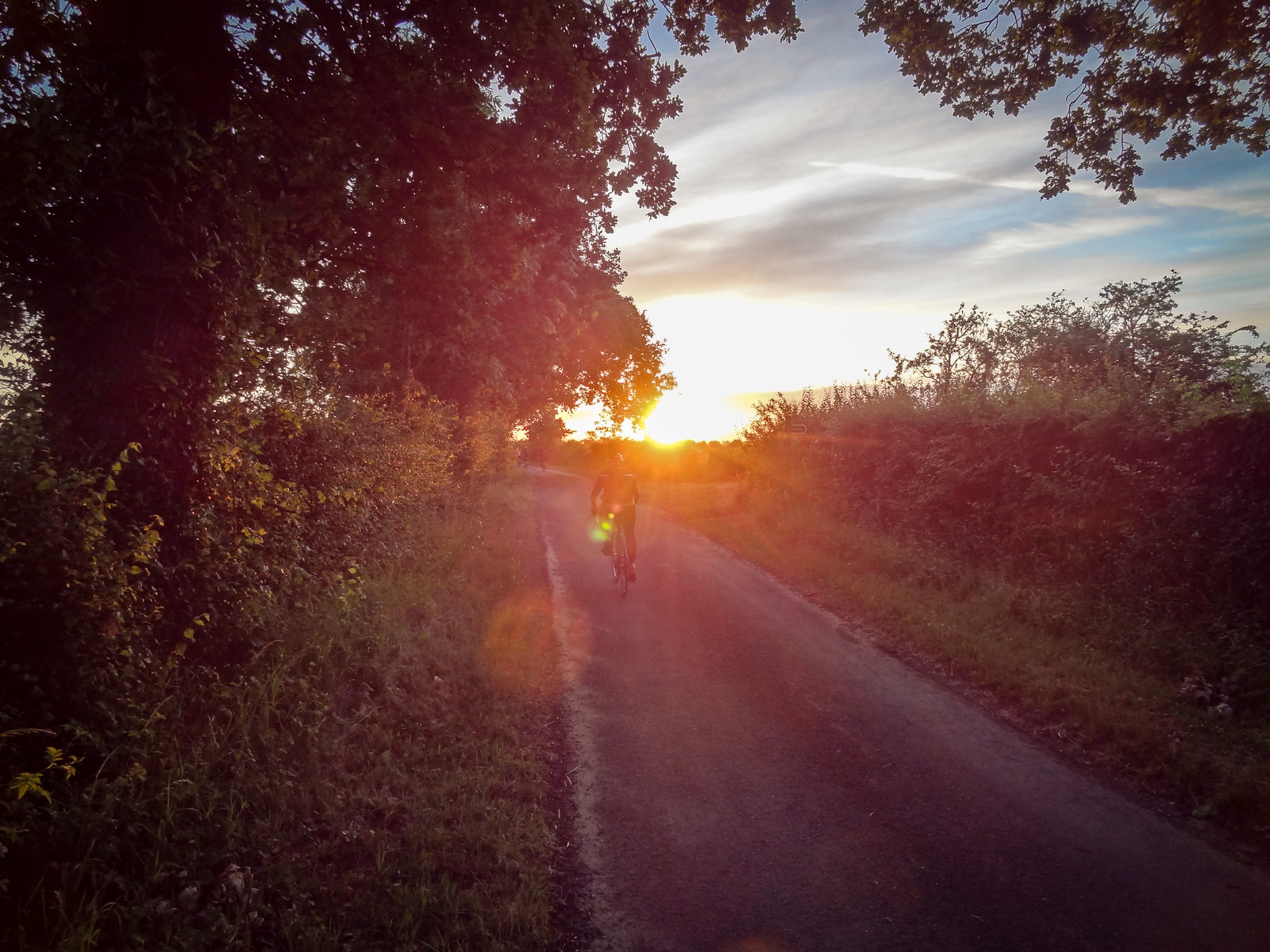 Finally we reached familiar roads into Dunwich. Coming in the other direction was a scary number of people heading back to London!

We finally arrived at Dunwich beach a little before 6am. The pub was doing good business, and there was a queue outside the café which was selling breakfasts.

On the beach, bikes and bodies were sprawled all over the place. 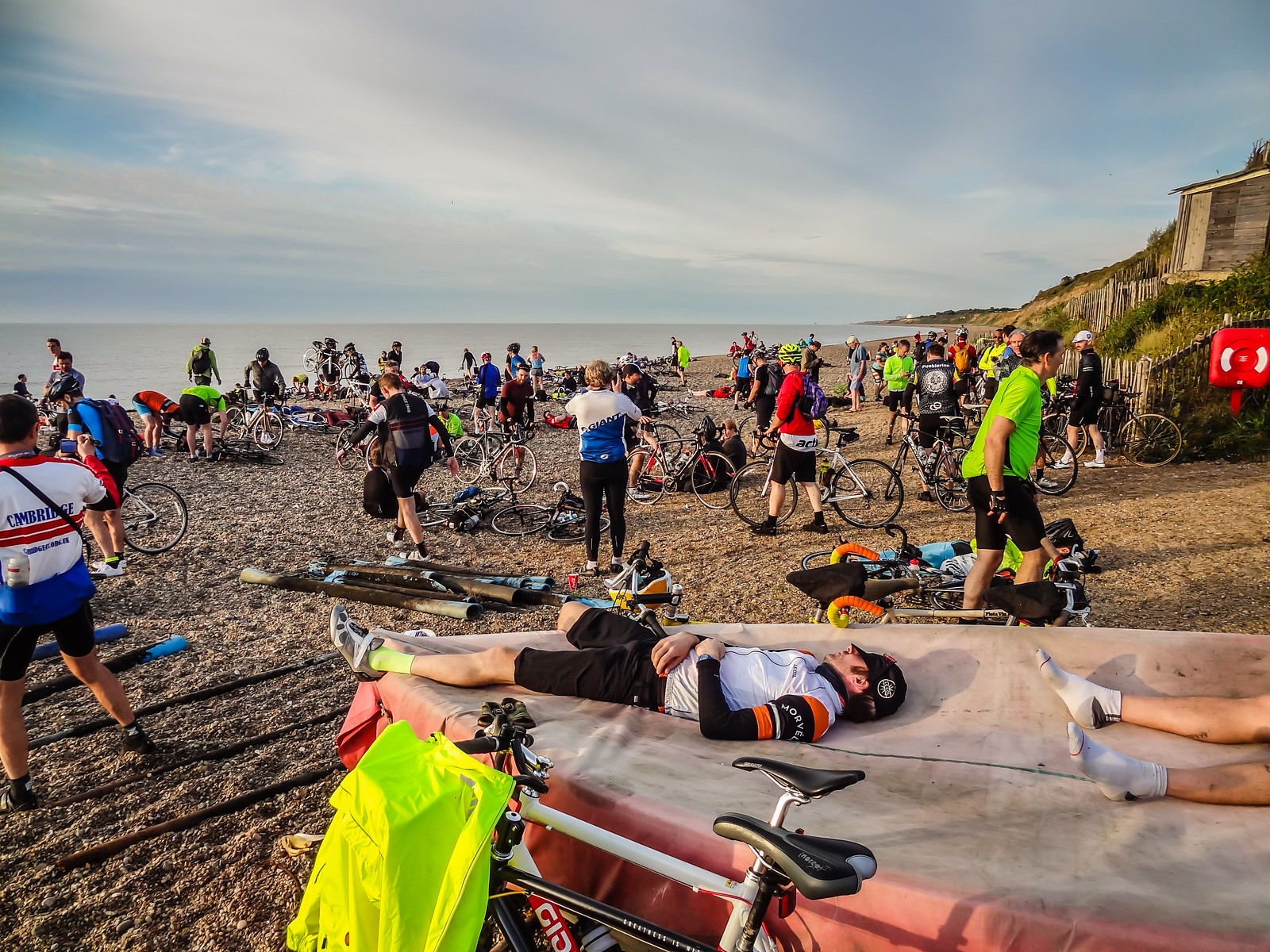 The first coach back to London wasn’t until 9am (At least of those organised by Southward Cyclists. Some clubs do sort out their own transport). And first we had to wait until 7am when riders could choose which bus to get back. It’s worth being in the right place at the right time to ensure that you get the bus you want. I managed to secure a couple of tickets for the first bus. So after a quick, but very welcome breakfast, I found myself changing into my swimming trunks.

Dunwich is actually a really nice place to swim. The water is lovely, and even at 7.30am, it was actually really warm. It felt like the day was really hotting up quite early on. 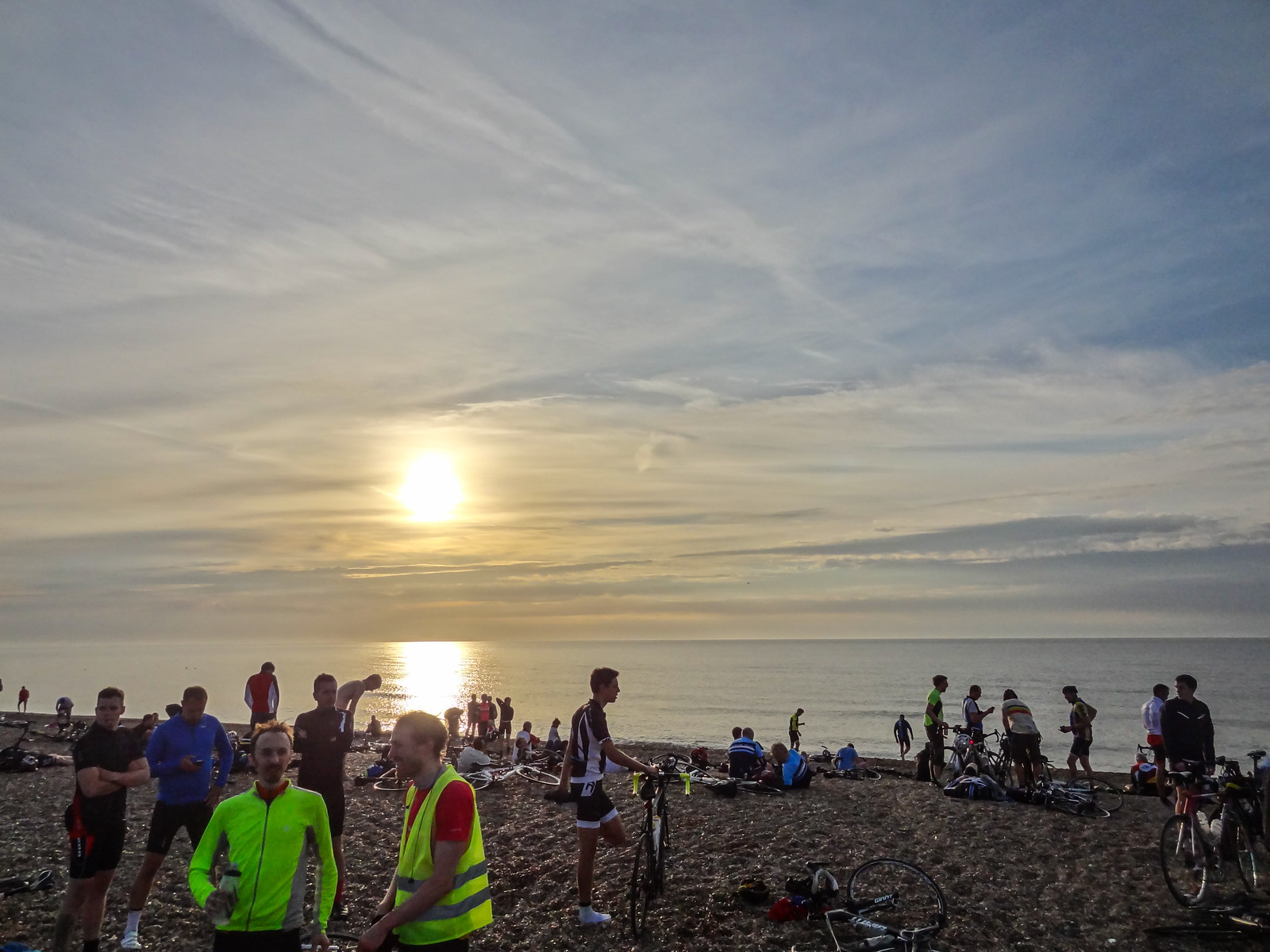 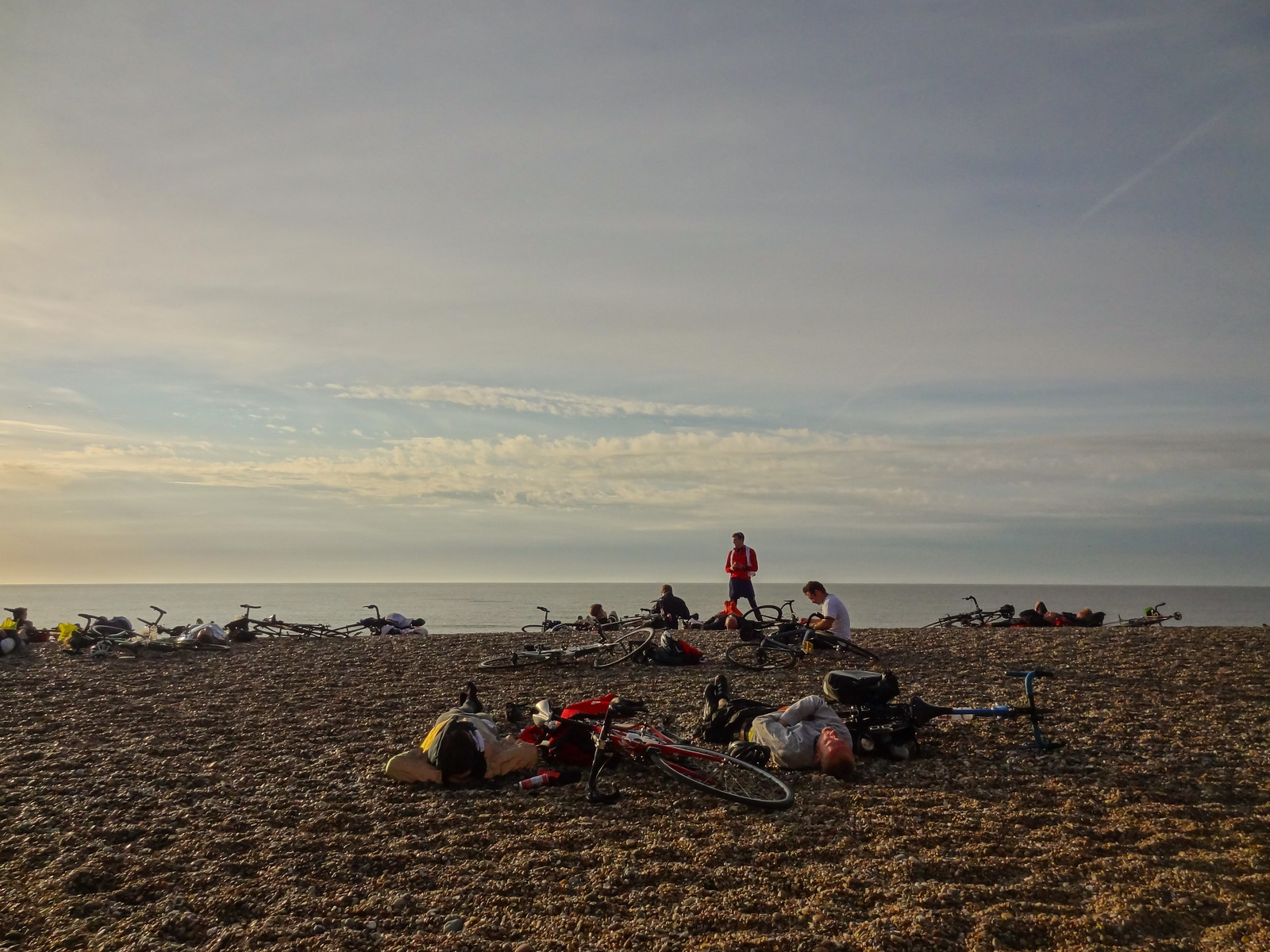 Then it was time to load the bikes onto the furniture lorries, and get our places on the bus. The journey back was slower than hoped due to some accidents, and I just can’t sleep on buses – today was no exception, even though I’d gone a night without sleep. But the weather had turned wet, and we were glad not to be on the beach. Worse still for those going by train from Ipswich was that a major problem at one the stations along the route meant a bus replacement service had been implemented. They don’t usually even let you take bikes on them, although photos on Twitter suggest they relented this time.

In London we collected out bikes, said our goodbyes and headed home. I’d managed a problem-free ride all day, although now I started hearing some grinding from my bottom bracket, so I ended up dropping off my bike for a service on the way home.

All in all, it was good fun, and highly recommended. I’m not sure I’d want to do it in the wet – so it was good that we’d missed the previous night’s electric storms. But the camaraderie is great. And you just can’t take it to heart when someone on a Brompton overtakes you going up a hill… 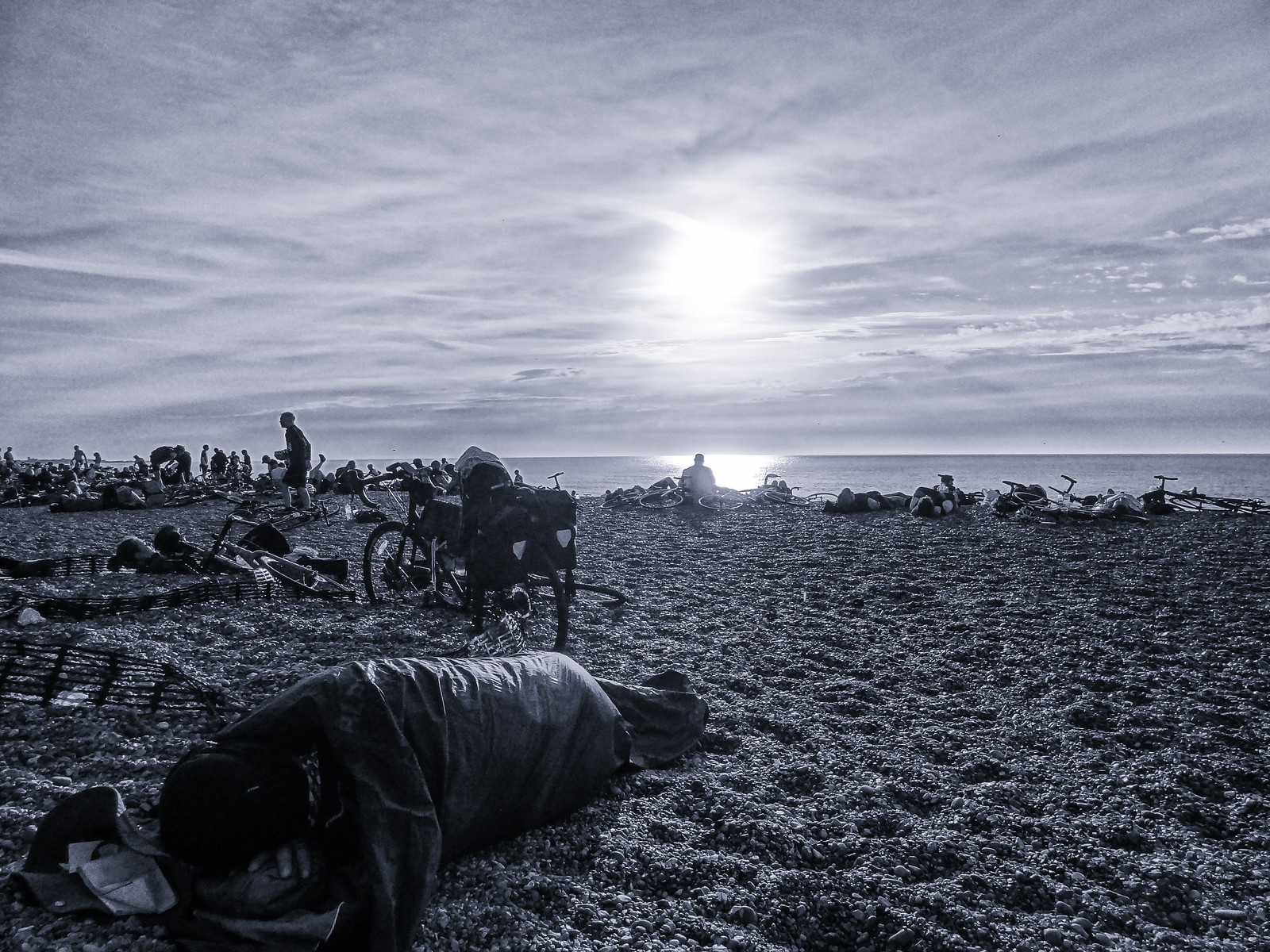