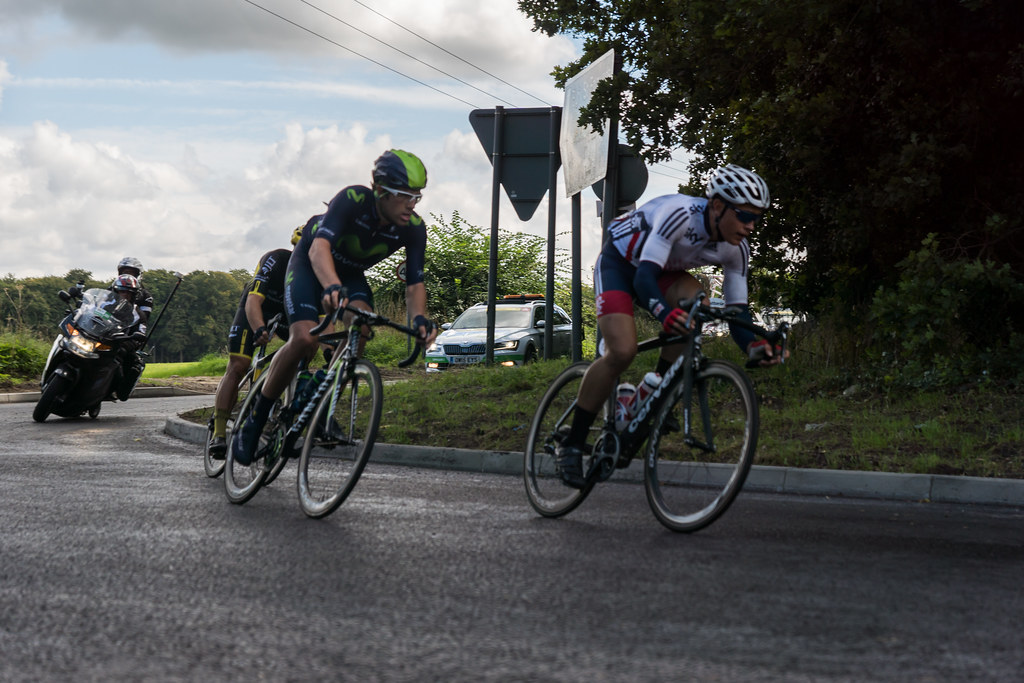 This year’s Tour of Britain is spread out quite a lot compared to some recent editions. It started north Wales, heading into Lancashire, then Cumbria, Scotland, Northumberland and the Peak District. Today’s stage started in Fakenham, Norfolk and would end in Ipswich in Suffolk. The profile showed the route to be effectively pan flat, and it therefore counted as a sprint stage. Sadly Mark Cavendish hit a car yesterday and although he doesn’t seem to be too badly injured, he’s now recovering ahead of the World Championships in the US next week.

Because the stage didn’t have an obviously exciting place to visit, I decided to head to the most convenient location for me, Thetford. Not that it was that convenient. Although I could catch a train all the way there, it seemed like a nicer idea if I travelled to Ely and then cycled the rest of the way. I’m familiar with some of those fen roads, and although the wind would either help or hinder, it seemed a sensible option.

I tend to use a combination of online route planning sites such as Strava or Garmin Connect, alongside looking at Google Maps. Then when I’ve settled on a route, I upload it to my Garmin 1000 which has full mapping, and then follow the route. I’m afraid that I didn’t spend quite enough time route planning this time around and faced a couple of issues as a result.

Leaving Ely, I quickly found the drove road I wanted and was flying. Although the forecast had showed rain early on, I had seemed to have just missed it. The road was damp, but it was now sunny. The main reason for my early speed was that I had quite a strong tailwind meaning that I could comfortably reach 40 km/h. My route directed me to take a right hand turning and this was the start of me questioning the route that I’d planned. The road looked rough. While it wasn’t a gravel track, farm vehicles had left a lot of gravel and mud on the tarmac. I gingerly followed the route until the inevitable happened. A sudden hiss and I’d punctured.

I was in a remote and exposed part of the country, and in no danger of any other traffic bothering me. I flipped my bike over and set about replacing the inner tube. I was nearly finished when another cyclist emerged from nowhere. He checked I was OK and we compared notes on how to get to Thetford since he too was planning to catch the Tour. I told him the way I was going in vague terms and he headed off. Unfortunately I had a problem with the valve of my new tube, and I had to use my second (and last) CO2 tube to reinflate the tyre. I carry a mini-pump too, so while I’m sure I hadn’t got anywhere near 100 psi, I was satisfied and headed off again. It was all a bit unnecessary because I’d been routed via a quiet road when the main road wasn’t actually that busy, was clear of gravel, and was exactly the same distance.

But now I’d changed direction and was experiencing quite a heavy crosswind. I ploughed on, beginning to worry that I’d not left enough time to get to Thetford before the race arrived.

My Garmin showed me that I should turn left onto a smaller drove road towards Little Ouse. I relented and followed the road, relieved to be experiencing the tailwind again. However 5km later, as I reached the village, I realised that this was road was rapidly deteriorating. While you could continue with a mountain bike, or something with tougher tyres, my 25mm Continentals weren’t up to the job. I didn’t want another puncture. So I turned around and retraced my steps, into the headwind, and back to the main road.

I crossed the railway at one of the more remote stations in this part of the world, Shippea Hill (there really isn’t a hill anywhere about), and headed on to Lakenheath. With the double backing on myself adding roughly 10km to my trip, and the slow puncture repair, I was worried that I mightn’t make it in time. While I was consulting my phone to check what time riders were expected into Thetford, an elderly gentleman on a touring bike pulled over and wanted to check on routes. He had a couple of OS maps, since this area fell along the border, and wasn’t sure of the best way to the race route. He’d seen the race come through in Lancashire and said that there’d been marked road closures everywhere. Out here in Suffolk, I’d not seen a single sign warning of the race coming through. That said, I was sure that the police would be operating rolling road closures, meaning that the traffic might have to wait a maximum of 20 minutes before roads were re-opened.

I was keen to get Thetford, and was going to head north around the forest to Brandon and then on to my destination. He said he was going to head south to Mildenhall before heading northeast to the village of Elvedon. We parted company, me using my Garmin to direct me to Thetford. I must admit that I diverted from the route when I saw a traffic sign to Brandon. This in turn took me along the northern edge of RAF Lakenheath. I then joined a familiar road north to Brandon – this forming part of a route I’ve often driven to my parents in Norfolk.

I turned off the road as the GPS indicated and headed through a vaguely hilly section in the middle of Thetford Forest Park. I didn’t realise it at the time, but I was heading southeast now, and I passed the entrance to the local Centre Parc. I crossed the busy A11 and found myself entering the village of Elveden – the same place I’d discussed with the gentleman I’d met.

I doubled back up the route towards Thetford. Local villagers were sitting on the roadside awaiting the riders. I’d made it in time. 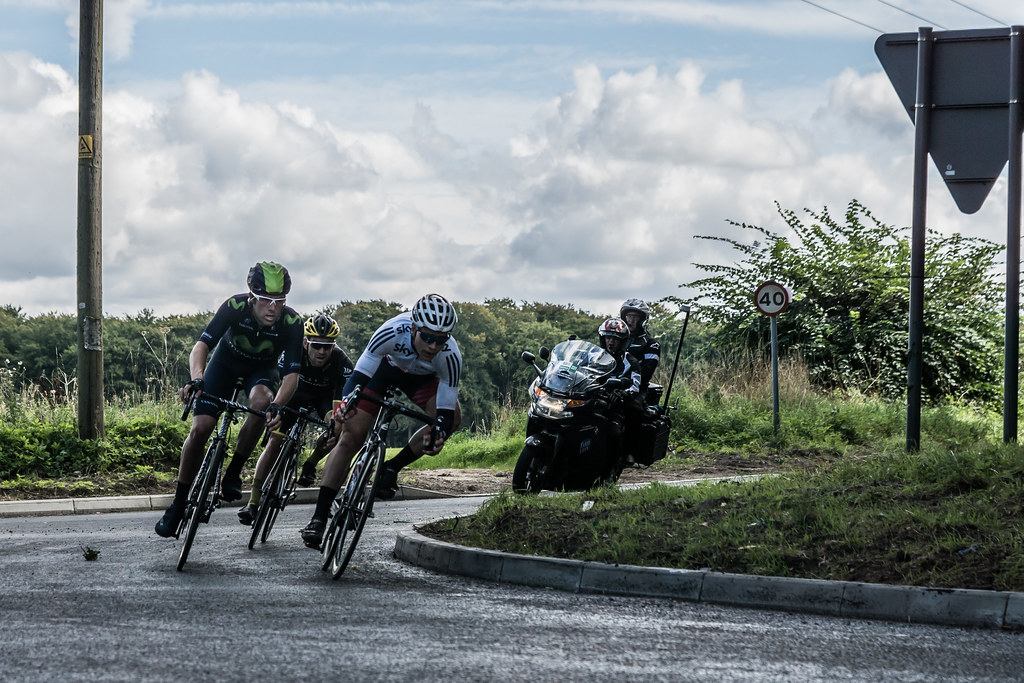 I found a spot on a corner and set-up to take some photos. A car ahead of the race informed us that three riders – all British – were about 6 minutes clear of the race. Very soon they were upon us, Movistar’s Alex Dowsett being the only rider I could instantly identify.

We waited another 6 minutes before the main peleton arrived. They were clearly in chase mode with Lotto Soudal and Sky chasing hard. The peleton was basically together, and although they’d just been through a feedzone, they were not noticeably slowing, and there were still over 100km of the stage left! 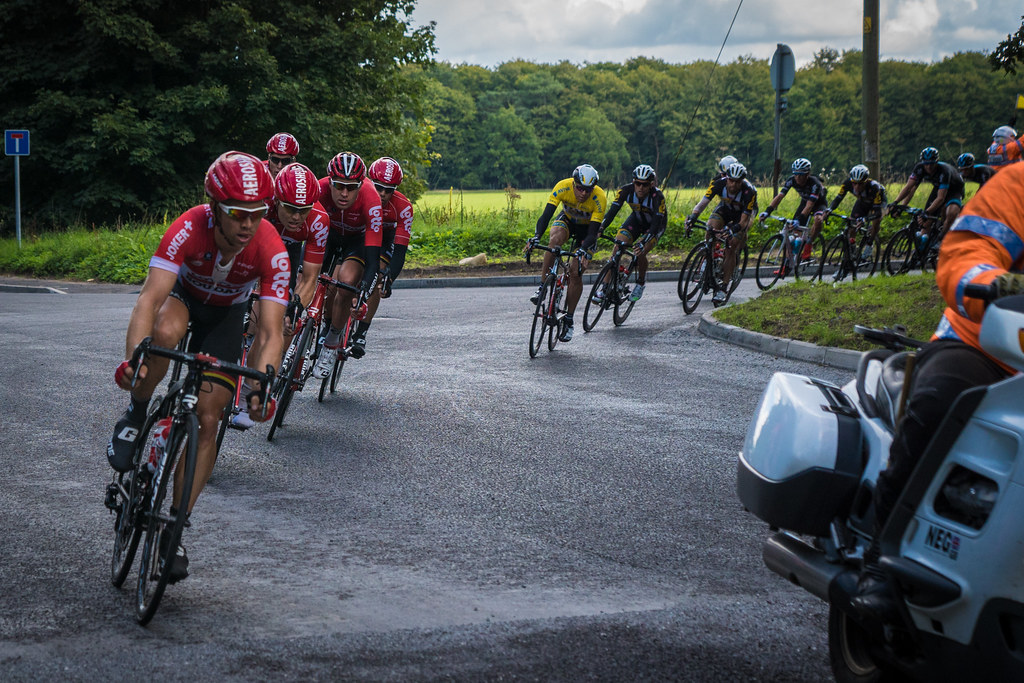 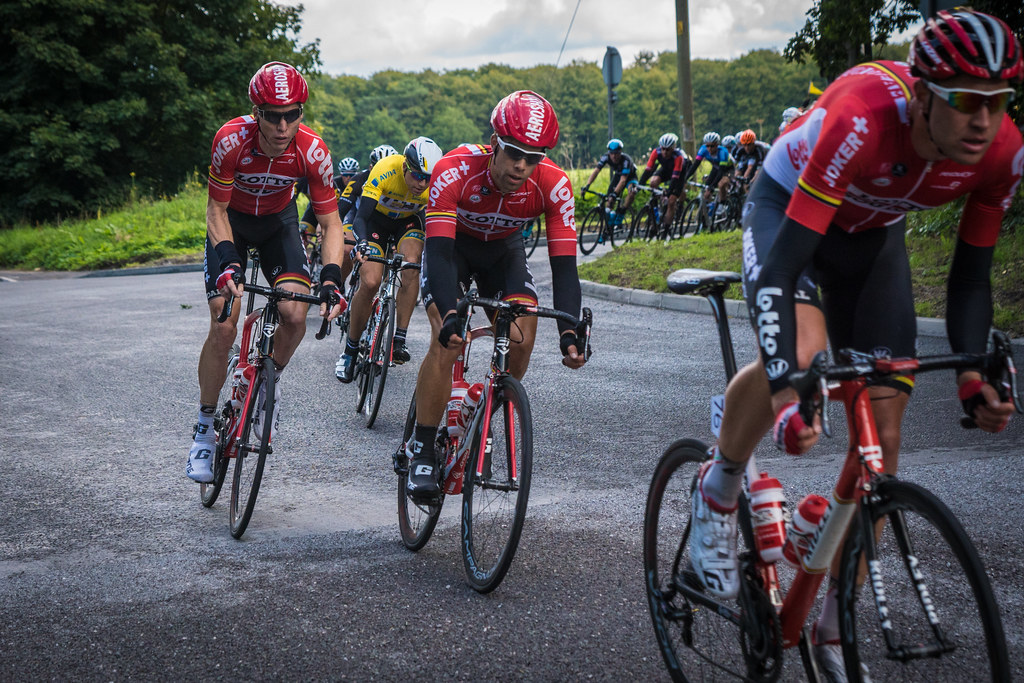 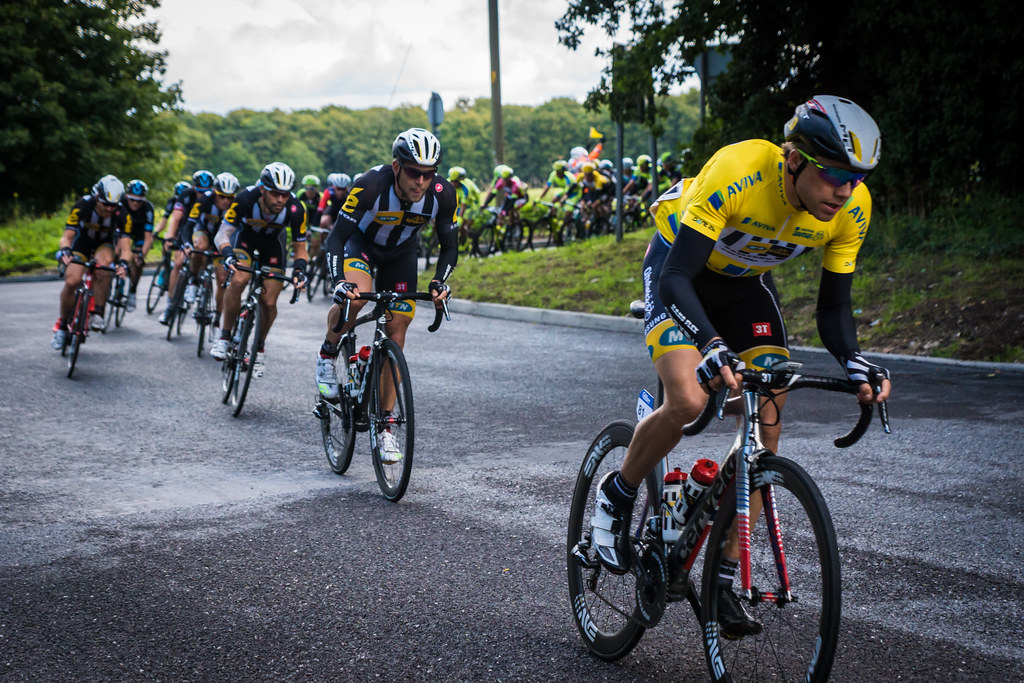 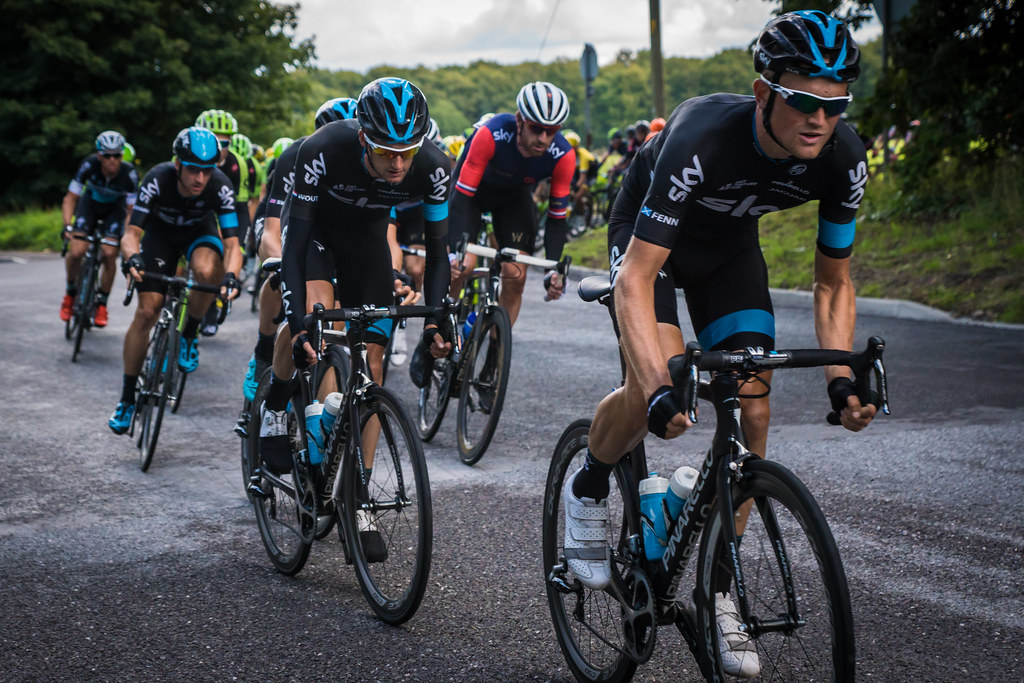 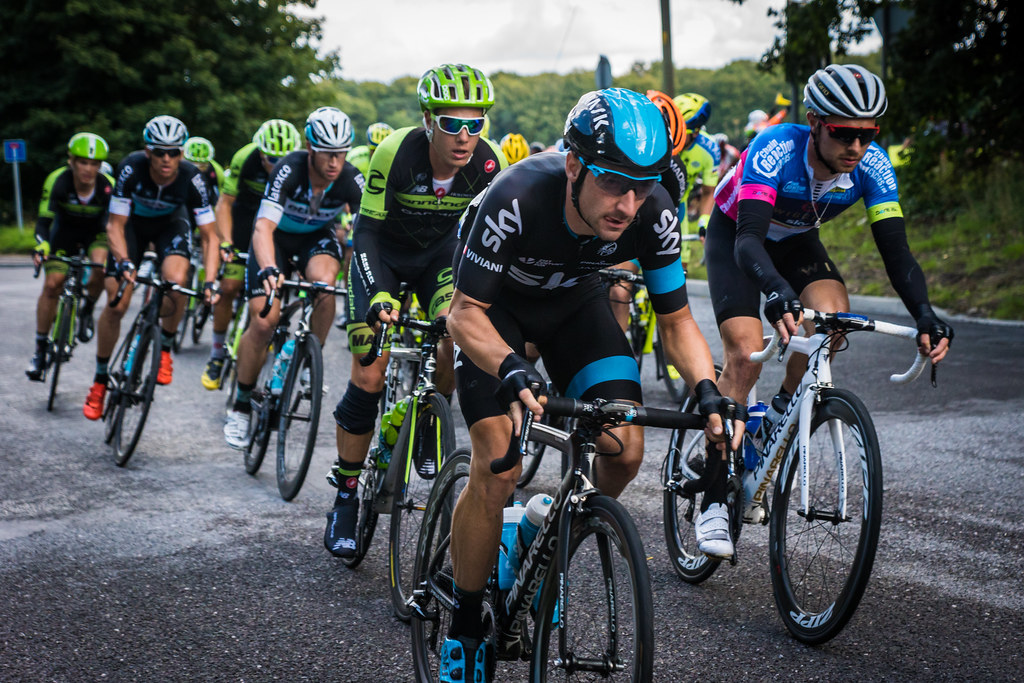 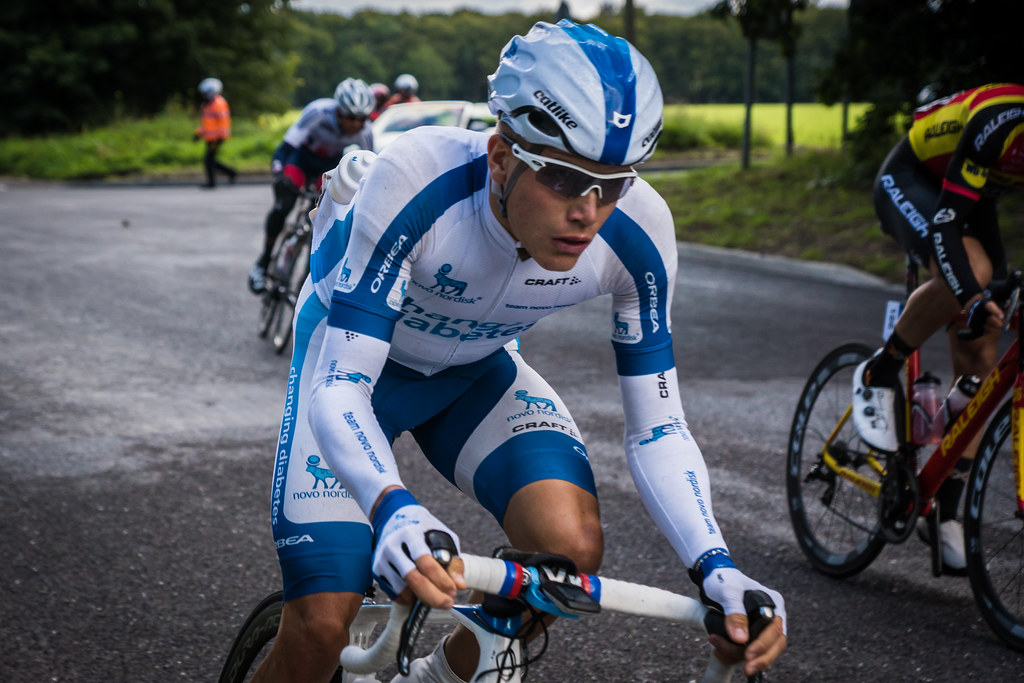 As I was packing up my camera and getting ready to head off, the chap I’d met earlier arrived. “Have I missed the race?” he asked. Yes, he had.

I felt awful. It turned out that he’d not gone south as he’d said he would, but headed out towards Brandon as I had. If he’d been behind me, I hadn’t realised at the time as I was cycling hard to get to Thetford in time. But he’d taken a wrong turning in Brandon and headed all the way into the centre of Thetford before heading south, using a horrible stretch of the A11. Ironically, I’d planned on going that way into Thetford myself, but my GPS had navigated me away onto quieter roads. He’d now arrived late and missed the race. If I’d known, I’d happily have ridden with him.

I now tried my best to help him find the café he believed was nearby. Although I would have quite liked to get a snack there myself, I felt so guilty at “abandoning” him, I decided to head off.

The thought of retracing my steps as I’d originally planned wasn’t filling me with excitement, so I decided to follow the race and head on to Bury St Edmunds. There, I’d be able to get a train back to Cambridge and then on home. I started along the race route, now fully re-opened to traffic.

Ahead of me I noticed another cyclist doubling back on himself and then grabbing something from the grass. He slung a Team Sky musette over his shoulder.

Damn! I fancied one of those. Part of the reason I’d headed to this location was because I knew it came after the feedzone, and that there was an increased chance of finding abandoned goodies. But when the race had come past, I’d only noticed a couple of riders still in possession of musettes.

I soon caught him up, because now I could see that this wasn’t pure luck. He was slowly cycling the route looking for discarded freebies in the grassy verges.

I overtook him since he was going so slowly, but now my eyes were more on the grass verge than they were on the road. Ahead of me, a car suddenly pulled over, and a man jumped out. He grabbed a discarded water bottle, hopped back in his car, and carried on. Another missed opportunity!

I was annoyed now. In all the time I’ve spent watching cycling at the roadside, the only thing I’ve ever got was a water bottle with a completely broken top. Given the number of bottles that riders get through this seemed like a poor return.

Then suddenly I saw something bright blue in the verge, with a water bottle alongside. I screeched to a halt and doubled back. Here was another Team Sky musette, still containing a few uneaten gels and a foil-wrapped piece of cake. And alongside it was a seemingly fresh Team Wiggins bidon. Excellent! I didn’t think much of it at the time, but I did notice that the musette was inside out. But looking at my photos later, I realised that this was because it was probably a Team Wiggins musette. Rapha who provide both Team Sky and Team Wiggins with their kit, don’t seem to have made Team Wiggins ones yet, so someone had simply turned a Sky one inside out to prevent the wrong team name showing, even though Sky also sponsors Team Wiggins! 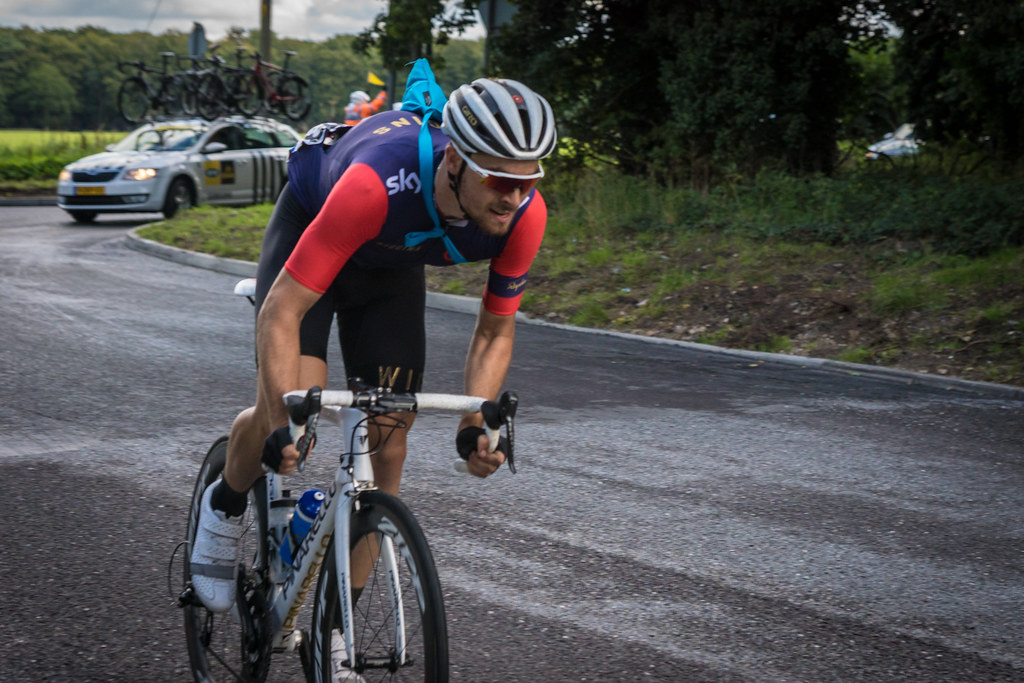 (You can see a black washing instructions tag on the outside of the musette in the above photo. I suspect it was this very bag I collected!)

Now the other cyclist overtook me. Even though he was cycling slowly again, I thought it’d be bad manners to overtake him again just to get first dibs on scouting the verge. So I dropped back and kept looking. And there, in the grass was a bright green bidon – a Cannondale-Garmin one. I knew this because I was given a new one last week. at the Garmin Ride Out. Still, they use Camelbak as their supplier, and I like the openings that Camelbak use on their bottles. A keen eye is very useful!

Interestingly, both bidons were marked by soigneurs, I assume to ensure the right riders got the right bottles. Team Sky seemed to use Tippex, while someone had used a red Sharpie on the Garmin-Cannondale bottle.

Soon my GPS took me off the main road, and the race route, keeping me off main roads to the best of its ability, and I was in rolling countryside before I crossed the A14 and headed into Bury St Edmunds, somehow timing it perfectly for the hourly service back to Cambridge. On the train I compared notes with another cyclist who’d headed out from Cambridge to Bury St Edmunds to watch the race. We were both looking forward to seeing the highlights this evening to find out who won the stage (Lotto Soudal’s Andre Greipel), and whether Tom Dumoulin could hang on in the Vuelta (sadly he couldn’t. As he said on Twitter, it was one stage too far for him). Who says cycling isn’t social? 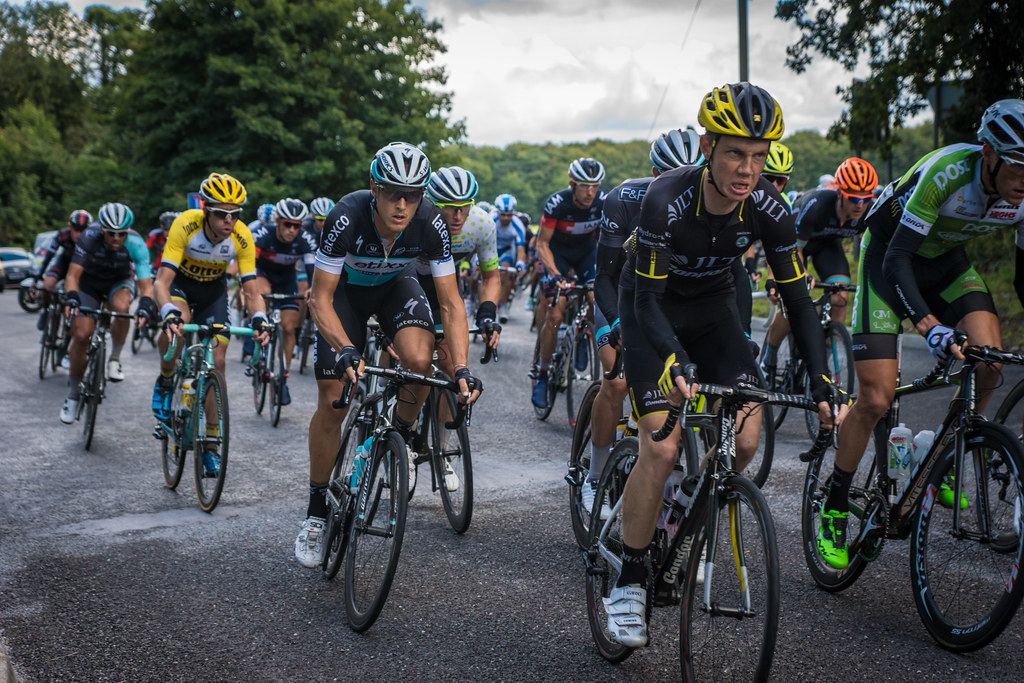