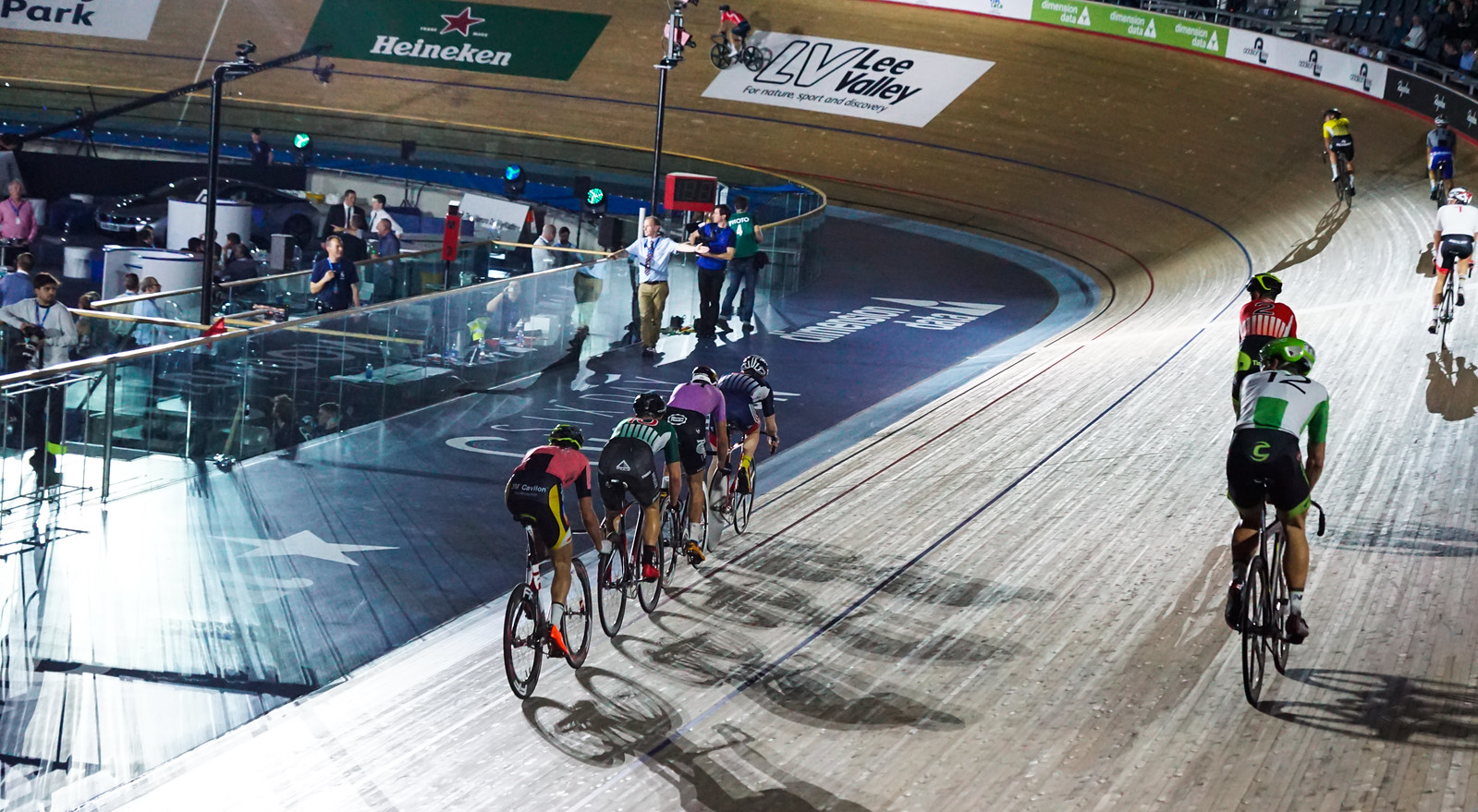 Note: I began writing this last year, and then like so many posts, I left it languishing in drafts until I’d got around to processing the photos to go with it. Then I was lax about getting up to date with processing my photos. And so finally, three months later, here’s the whole piece.

I must admit that I was quite excited when I heard that six day racing was returning to London. Mark Cavendish was the promotional front man behind it, and I suspect he may well have been racing the series were he not still recovering from injury.

Essentially a two-man team competition, it’s racing in a velodrome over six nights, with an overall winner determined from the cumulative results. In between events for the six-day competitors, there are other races so that entrants to the main competition aren’t actually on-track non-stop all night. 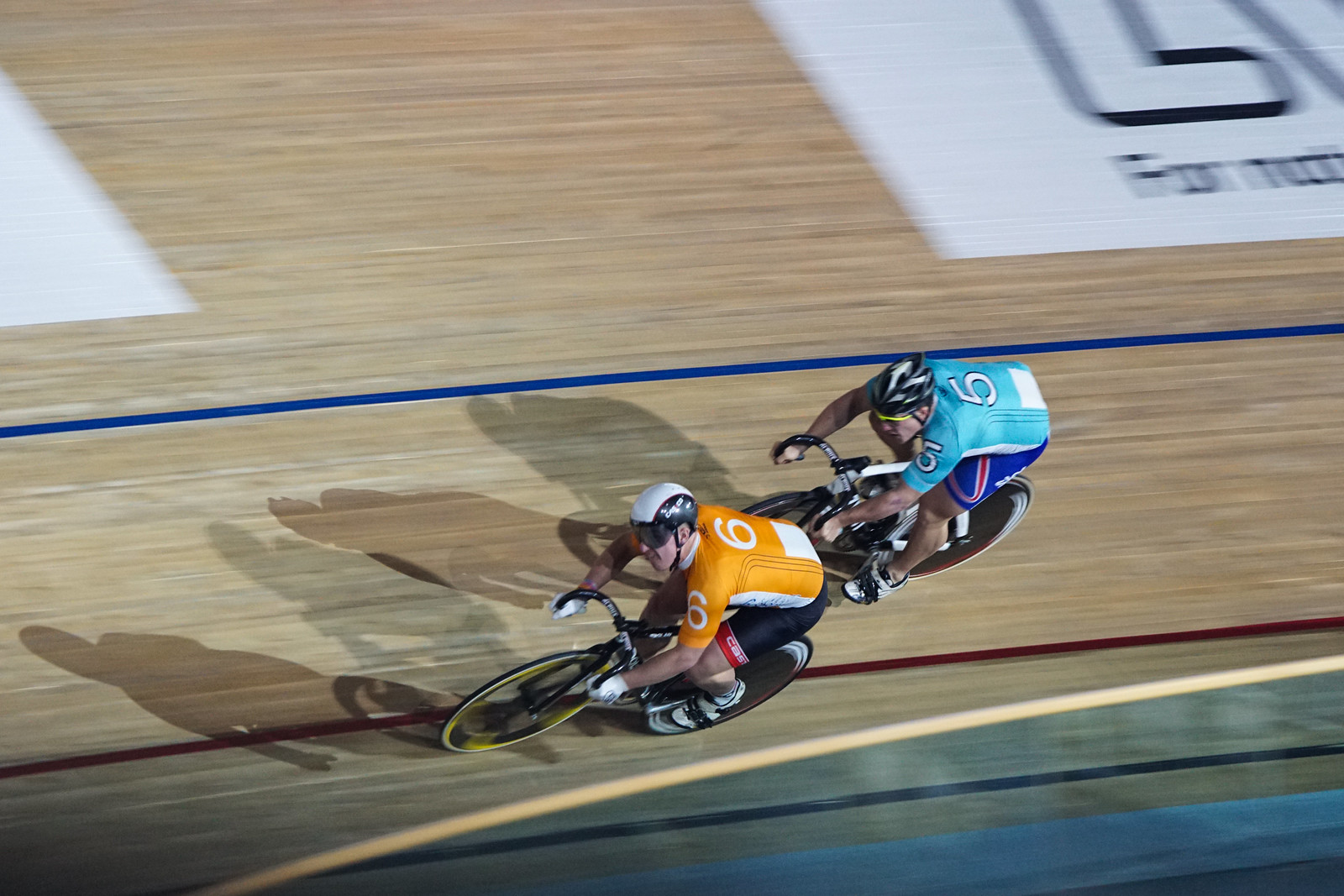 That all said, the racing is fast and furious, designed to keep an audience attentive. As soon as one event finishes, the next is on track – although most track racing is like this. Allied to the cycling are the lights and music. In London we had a Ministry of Sound DJ in a purpose made booth right in the centre of the velodrome. He was providing us with a non-stop soundtrack of music for all the events, ramping up the volume accordingly. 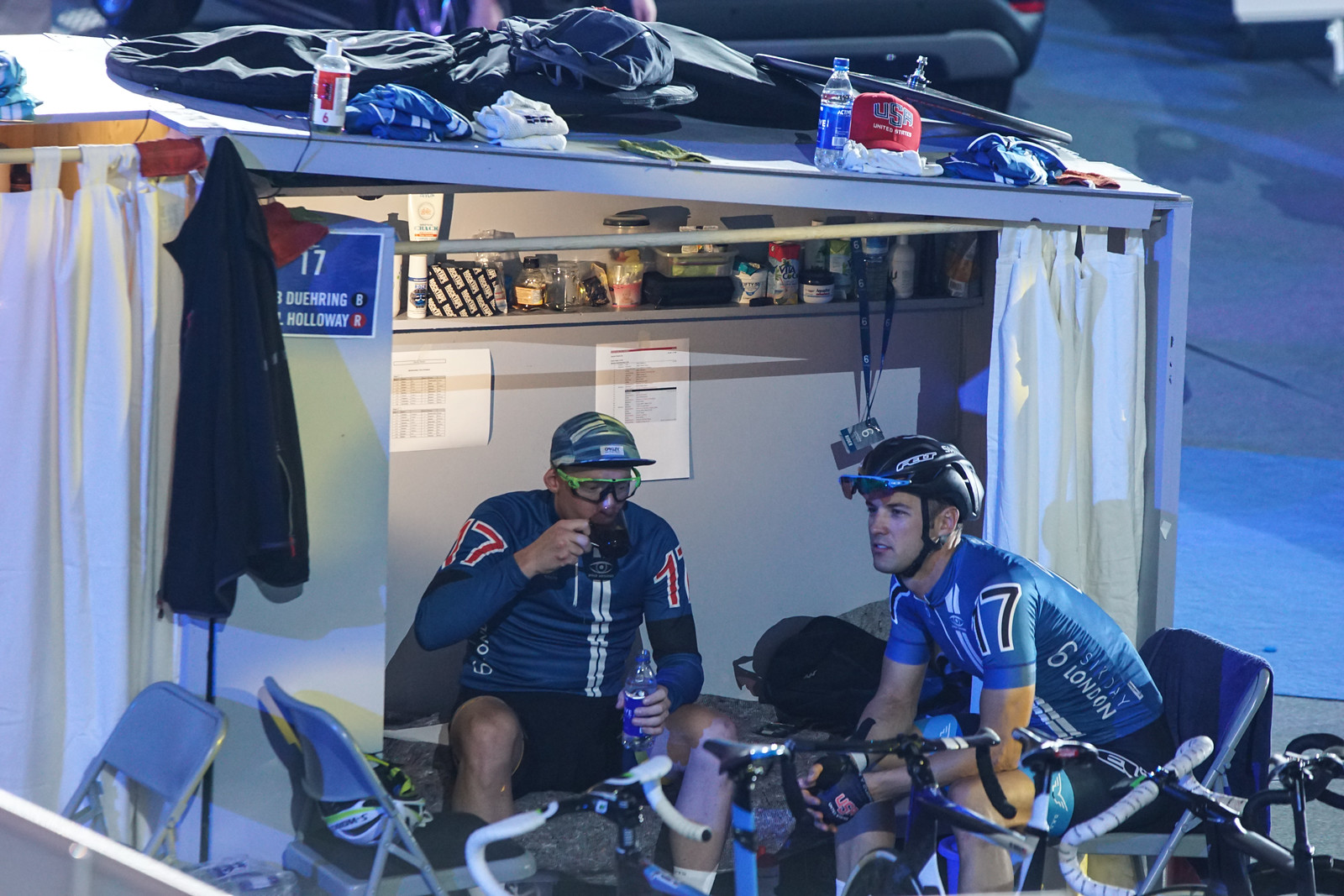 At one end of the velodrome’s centre were the racers’ cabins. Usually in London, where the 250m circuit leaves quite a big space, a good half of the area is handed over to riders in sectioned off areas. But they can also easily escape downstairs to toilets and changing facilities. Traditionally riders rarely left this central area during a meet however, so the only privacy they were afforded were these wooden cabins with curtains they could pull across. More importantly seigneurs could give them regular massages to keep them loose between races. In London this wasn’t strictly necessary, but they kept the cabins on for form’s sake. 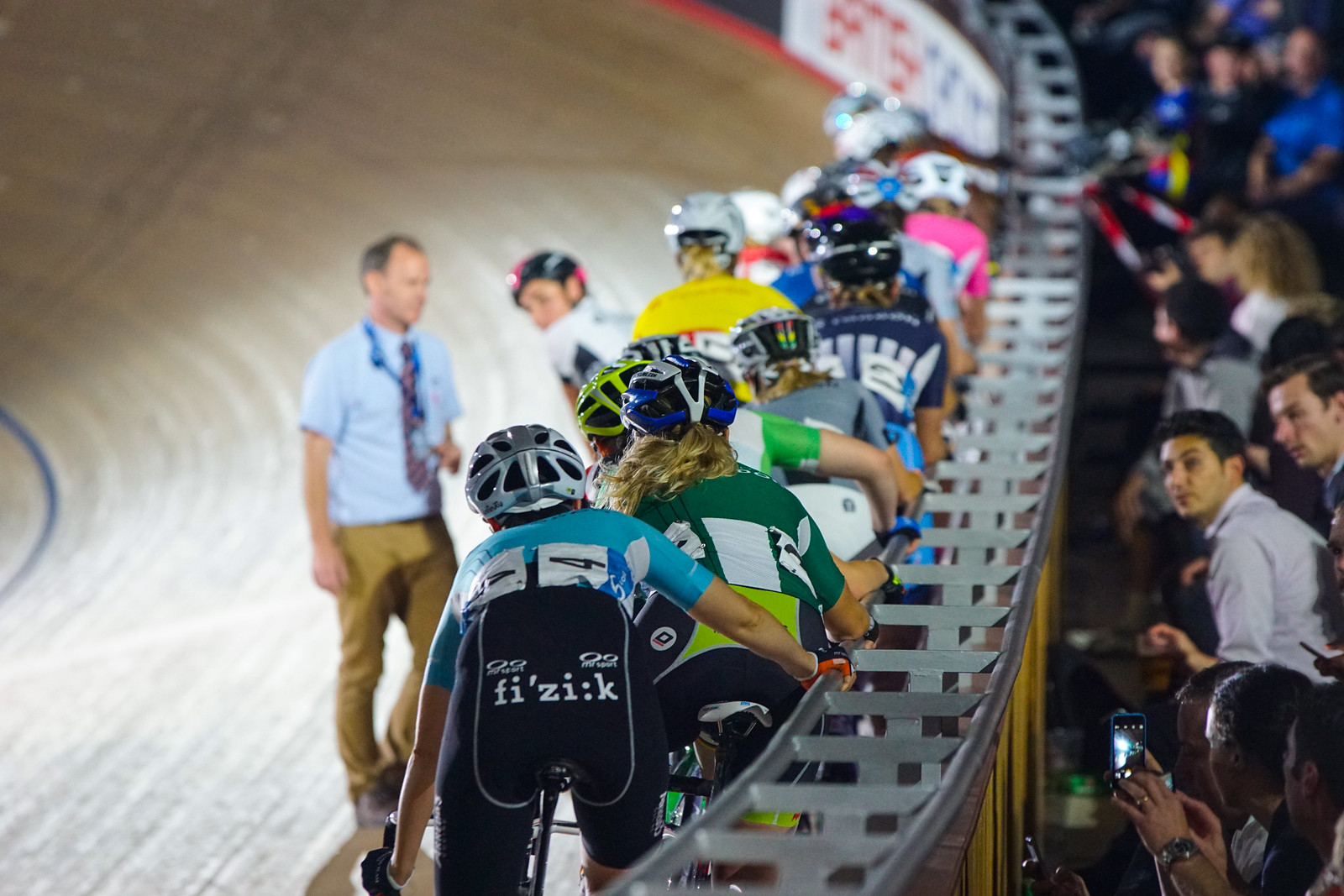 So what did I make of the night – the fourth of the six days in London? Well I enjoyed myself a lot. The music wasn’t pounding house music, but stuff you might actually know. It’s probably a cliché, but who wouldn’t want to hear the Ride of Valkyries when the Derny bike pilots lined up for their specific race? On top of that, the lighting made for a great atmosphere. Normally inside the London Velodrome, the lighting is bright and harsh, but for this they’d made things quite special.

There was lots of food and beer available for sale, and the crowd was having a good time. I suspect it’s not quite as riotous and chaotic as some Continental six day races, but it was good fun. 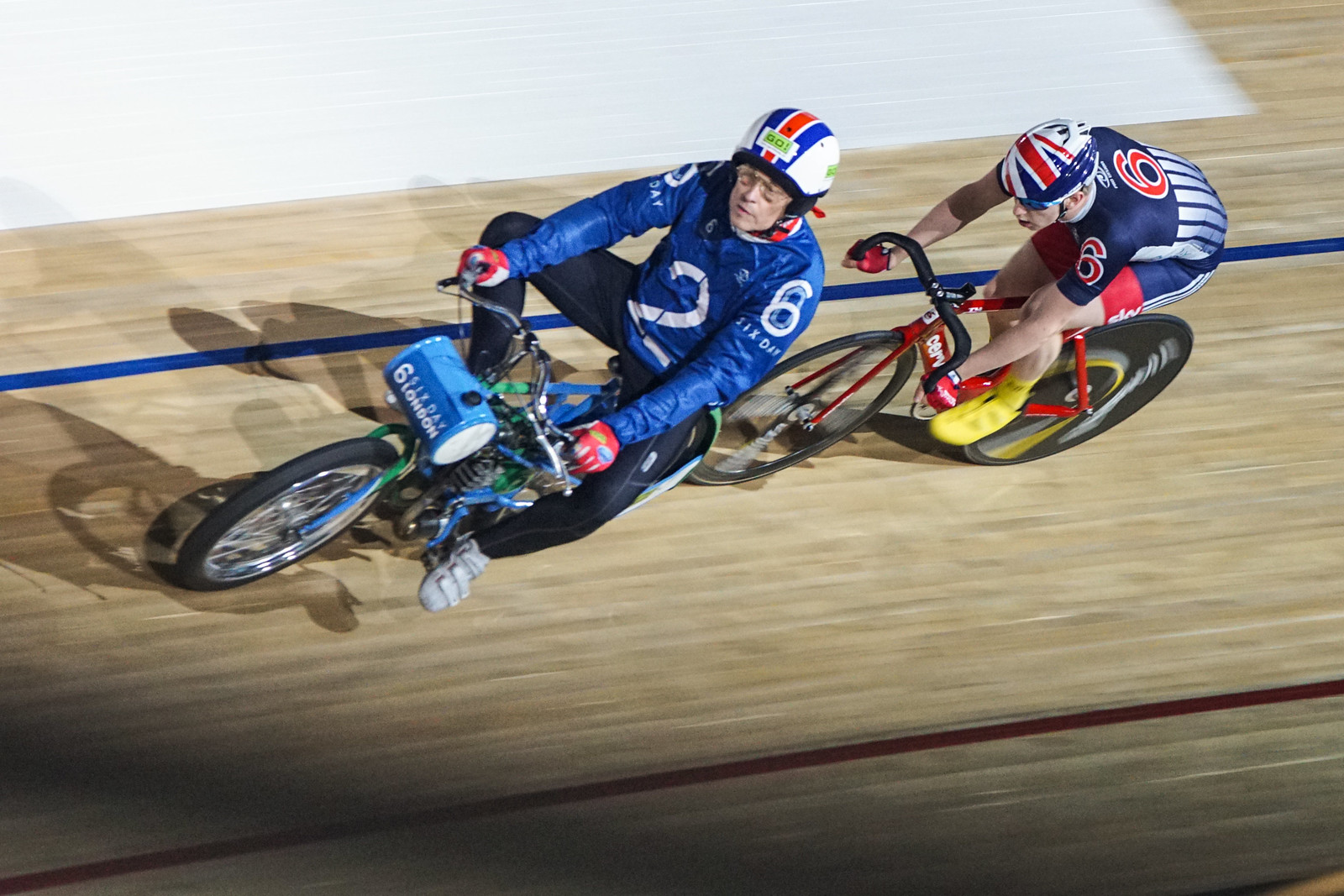 The crowd could have been larger though. I suspect it’s quite an uphill struggle to fill a velodrome on six consecutive nights. And I’m not sure that starting on a Sunday and finishing on a Friday is the best way to do things. I notice that in Ghent they start on Tuesday and finish on Sunday. At least that way you get big Friday and Saturday nights. On the night I went, they reallocated tickets to lower area for anyone who’d bought an upper level seat. 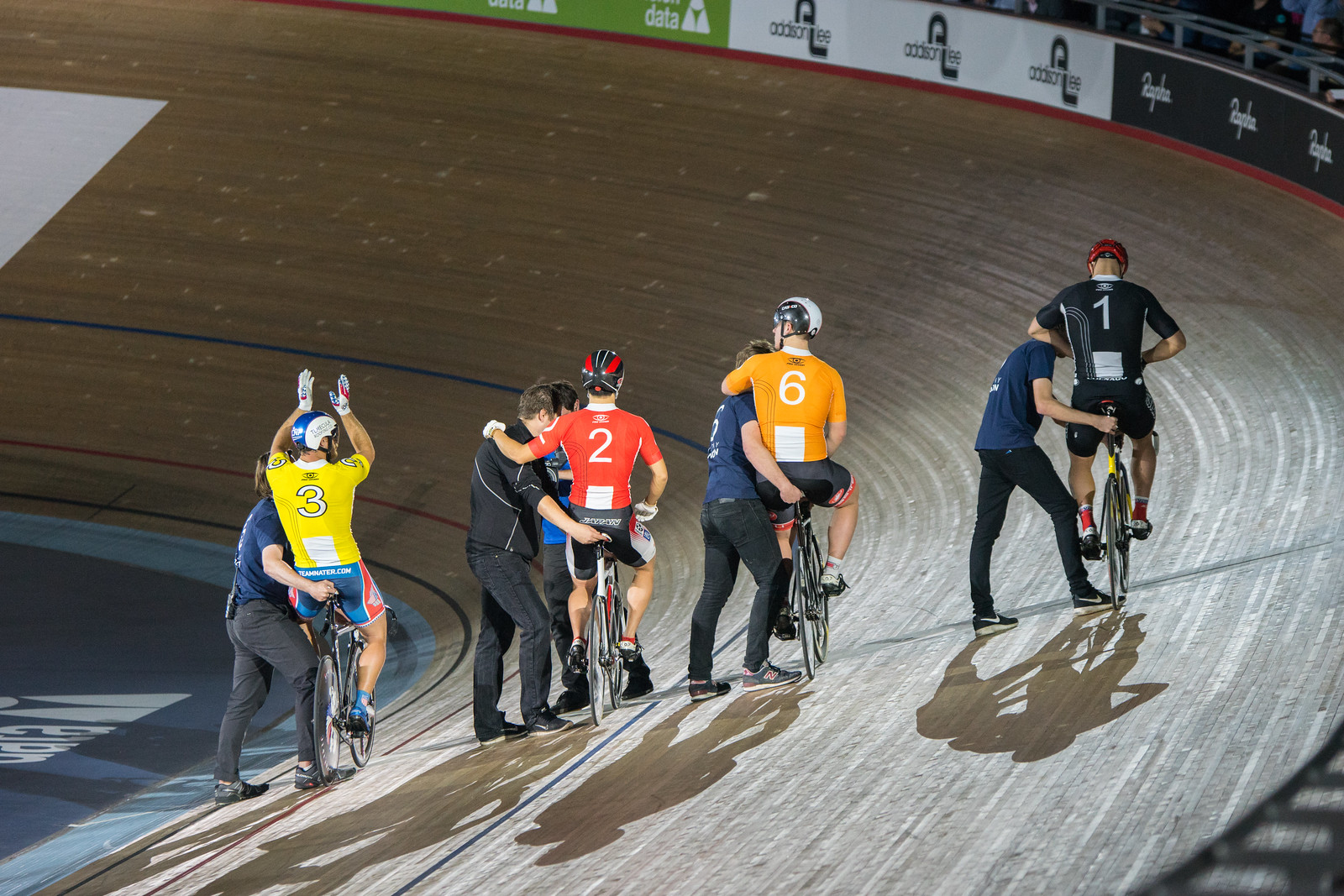 I think cheaper tickets would have been smarter too. My front row ticket actually cost £60 which is damned expensive however you look at it. The night before Bayern Munich fans were protesting the £64 price of their tickets at Arsenal to see two of the top football sides in the world play! Upper tier tickets were cheaper, but lower prices would probably have seen more tickets sold. Yes, cycling can be very middle class (much more so in the south-east in my view), but that’s a lot of money for any sporting occasion. And when you factor in £5 a pint Heineken, you’re looking at expensive evening out.

And I do note that whereas in Ghent, the centre of track costs €19 for standing, in London the part not given over to riders is for hospitality. There was a very expensive BMW parked in the middle, and a smaller number of people enjoying very pleasant corporate hospitality.

But they did put on a proper show. We had both in vision presentation from OJ Borg, short films to explain race formats, and of course commentary over the races which was separate from the TV commentary heard on Eurosport. You have to do that if you want to properly mix the sound for TV. The Revolution series tried using Hugh Porter for both track and TV commentaries a year or so ago, and it really didn’t work. My only complaint there was that some of OJ’s interviews were drowned out by the music underneath. Crank up the volume of those interviews, or drop the music down even lower.

The organisers made full use of the screens with lots of bespoke graphics, and it was good to have a few cameras attached to bikes for live pictures. 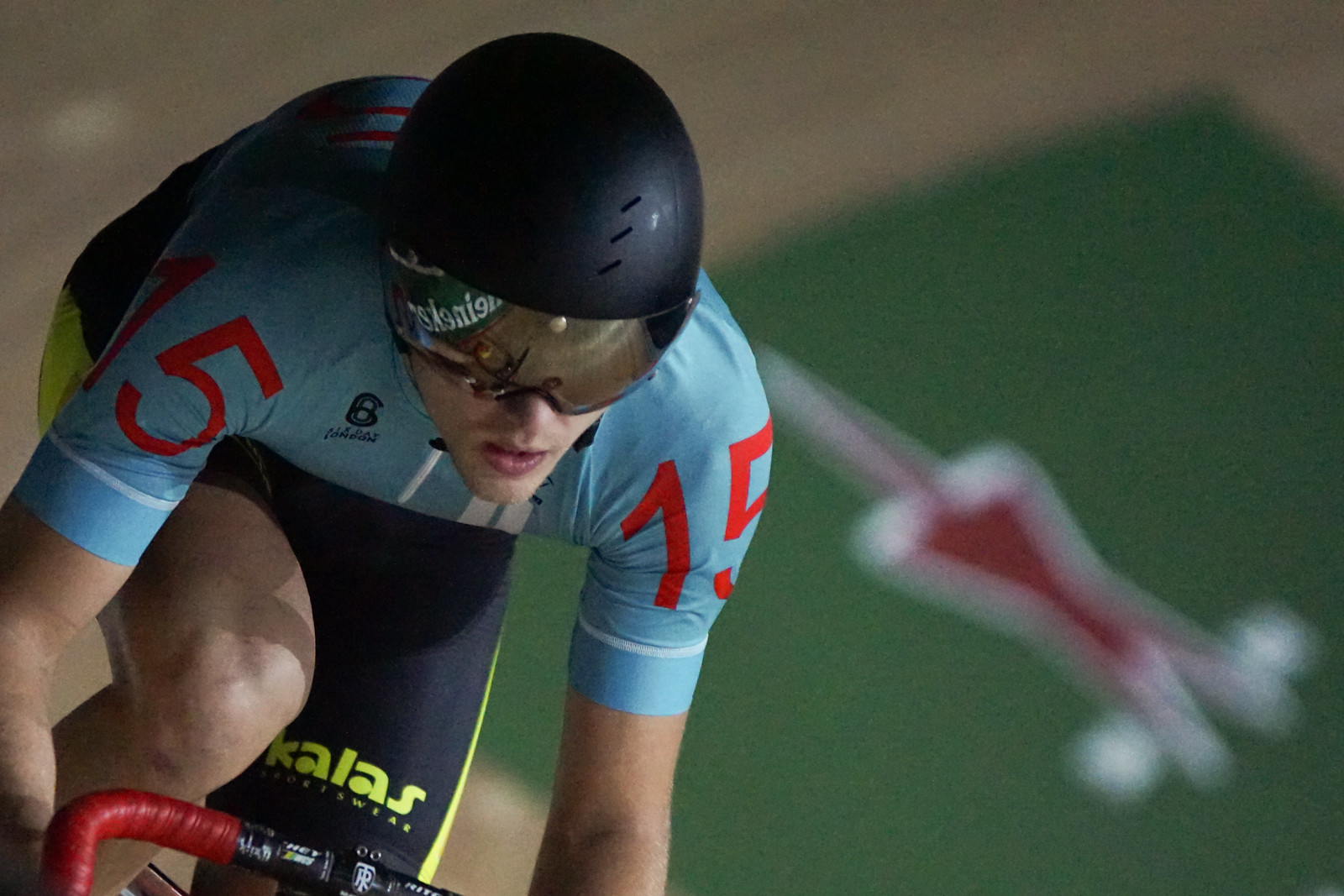 The riders are also aware that it’s a show as much as competitive. Indeed exactly how competitive they really are is a good question.

Most of the riders we saw are regulars on the six-day circuit, and have been riding around Europe for a few months or so doing this. But they play to the crowd enormously, bigging up the audience ahead of a time-trial, and taking their wins fulsomely. We got trackstands and “argy-bargy” that wouldn’t be allowed in a UCI event. It all adds to the interest – although race times remain good, and this is more than exhibition stuff.

I listened to The Cycling Podcast’s coverage of the Six Day meeting, and came away feeling a little the same. The other big velodrome racing in the UK is the Revolution series which has slowly expanded out of its Manchester home as we’ve seen new velodromes open. It’s now up to six rounds, usually with an afternoon and evening session for each round.

Because these events are limited to a single day, they’ve done well in attracting big name British riders to help fill the stands. They’ve had Bradley Wiggins and Geraint Thomas ride rounds for example. I note that the ticket for the same seat at the London round of Revolution only cost £38.50. Except, I couldn’t have bought it if I wanted to, because they’d already sold most of the better tickets.

I’m not saying the Six Day racing shouldn’t continue as well, but I think it needs to be made more affordable. This may sound odd, but the event they probably want to aspire to is the Darts World Championships at Ally Pally. Big groups of people going along with express intention of having a good time.

I’d love to go to Ghent and see some racing there. Maybe later in 2016… 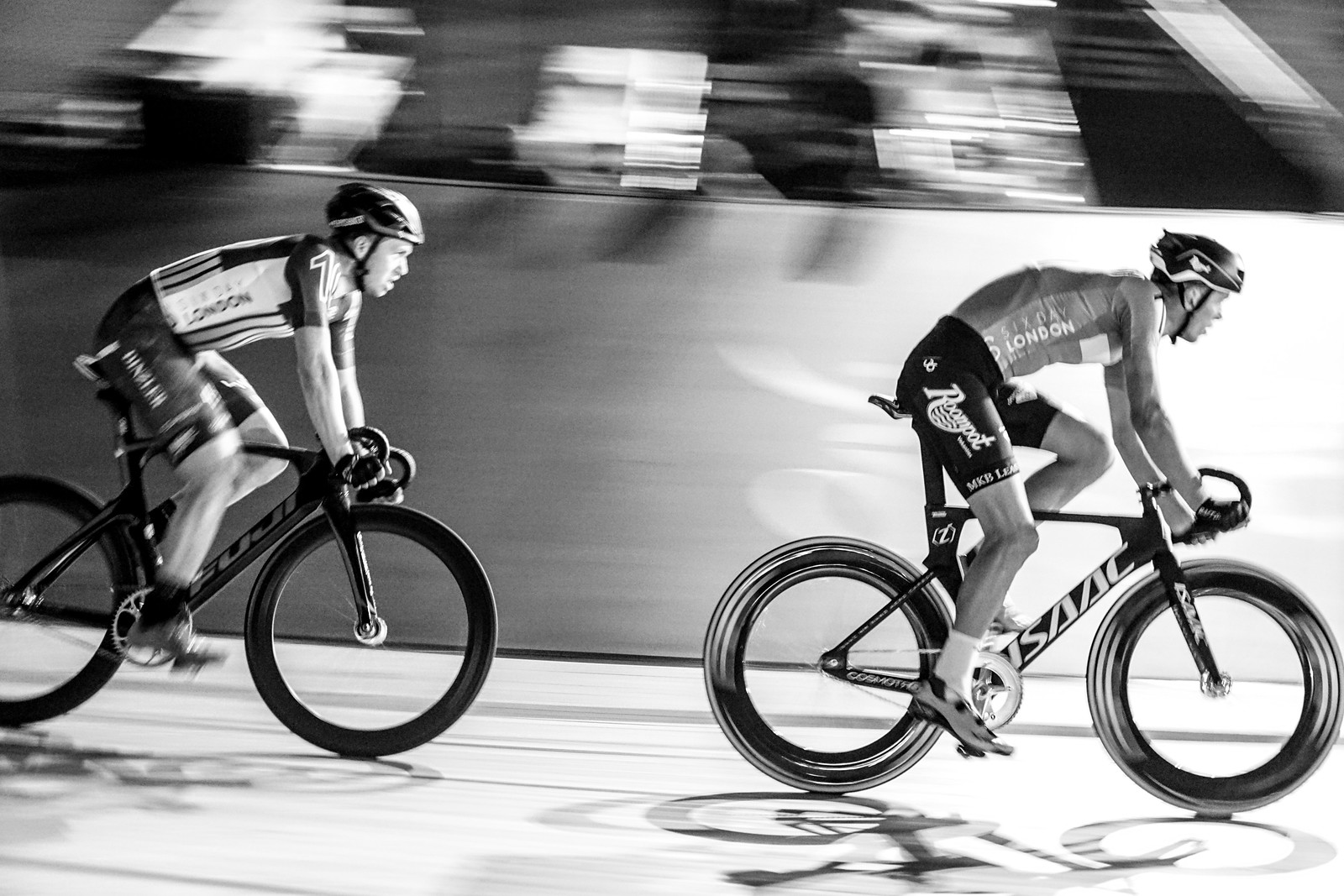