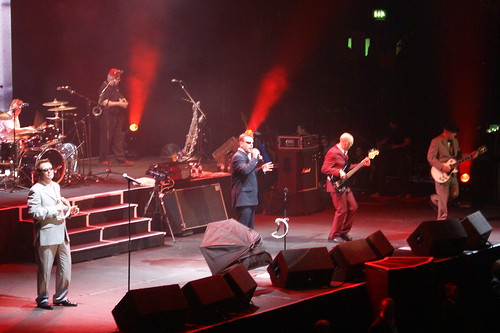 Baggy Trousers was one of the first pop songs that really made an impact on me back in 1980 or so. I learnt all the words from Smash Hits (or maybe Number One). But I don’t think I’ve seen Madness live before… until last night. Wembley Arena was a heaving throng (far fewer seats than at Springsteen a few weeks ago), with lots of moshing up front.
I managed to smuggle my camera in – well actually it was spotted in my bag and I was told to deposit it with reception. I seemed to get lost on the way. I also inadvertantly brought in a hip flask (dropped into the lining of my coat at the last moment), and the worst thing you can take to a gig – the single thing that all concert venues ban. Yes – a bottle of water brazenly sitting there on display on the side of my bag. I think the security guard was more worried about the camera.
Anyway, more samizdat photos on Flickr.