The Free Tibet Protest (AKA The Olympic Torch Relay)

So I thought that I’d head down to see the Olympic Torch Relay – the multi-country tour of the Olympic torch as it wends it way towards Beijing for this summer’s Olympic Games.
It was obvious from the outset that following recent increased violence inside Tibet, that this was also going to be used to make a political point with demonstrators making themselves (rightly) heard all along the route. I thought that the nascent photojournalist in me might be able to catch some of the sights and sounds of this.
I must admit that personally I’m not sure that the Olympic Games are the right vehicle for making political protests, at least in as far as I don’t think we should be boycotting them. I’m somehow hopeful that some of the concessions that the Chinese government is going to have to make will extend beyond the games this summer.
That said, the Free Tibet campaign has every right to make itself heard. And I’m in no way condoning the Olympic organisation itself which seems to be beset by greed and corruption. Things are probably cleaner than they once were, but until it’s a fully democratic organisation itself (giving the UK, for example, the right to pick its own representatives) then it has to remain questionable. I’ve always said that I think that sporting fiefdoms like the Olympics or FIFA, are the last “acceptable” faces of dictatorship.
But anyway, on to today’s events. It was snowy day in London with a few centimetres of snow having fallen across the capital. The streets were clear though, and I decided to head to Chinatown to begin with. As I approached from Covent Garden, it became obvious that there were an awful lot of police on the streets. They were mostly good natured, but as I entered the heart of Chinatown, I had to pass a bag search. On the radio I had heard that a protester had tried to snatch the flame from a Blue Peter presenter who was running with it, and others had tried to put the flame out with a fire extinguisher. 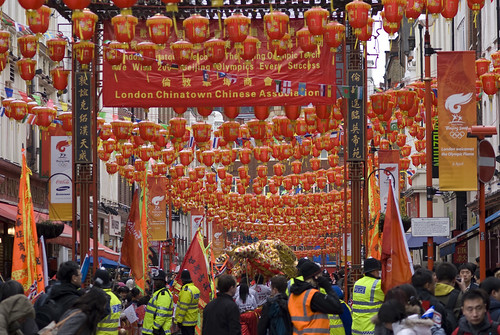 I stood on the corner of Gerrard Street, where the largely Chinese crowd were entertained by dragon dancing and inflatable Fuwa – the five characters who are the official Beijing mascots. 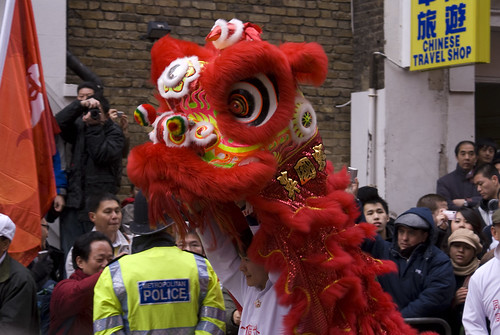 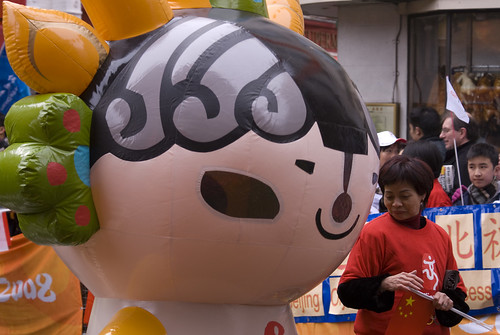 The spectators were largely jovial, and many were carrying dual-language banners and signs wishing all the best for the games in the summer. As I say, this was in the heart of Chinatown, and if anywhere was going to give the games a good reception, it was here.
Finally the police activity notably increased and the torch arrived. Through most of London, there’d been a convoy of vehicles leading the way, including double-decker buses and police vehicles. But in the narrow confines of Chinatown, it was just a police escort and the runners themselves. 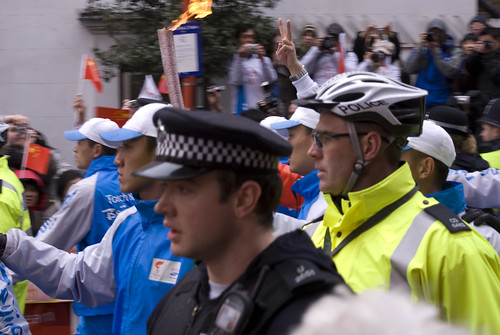 I don’t know who was carrying the torch as they arrived [UPDATE: I believe that this was actually the Chinese ambassador, who had been scheduled to run with the torch elsewhere but changed at the last minute]. He was flanked by Chinese securitymen in tracksuits, who were themselves flanked by more police in luminous jackets. Finally, there was a further layer of police dressed in black outside them.
Add to that the crowds, and you’ve got an enormous mass of people surrounding the flame. Seeing the flame itself was not easy and I’m 6’2″!
The runner handed over to the next runner in the relay – seemingly another athlete of Chinese origin, and she ran the length of Gerrard Street. There was not a lot to do now the procession had passed, and I began to drift on with the crowds around me. 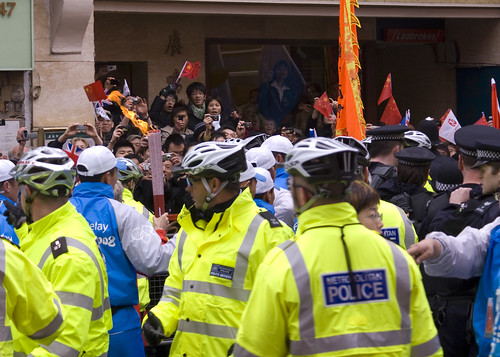 Then a middle-aged man started shouting, “China out” quite loudly and repeatedly. This raised the hackles of several Chinese men standing nearby, but he wasn’t to be dissuaded. So they had a loud and very confrontational shouting match which very nearly came to blows. The language used wasn’t especially suitable for the young children who were also out in the cold to see the torch relay. 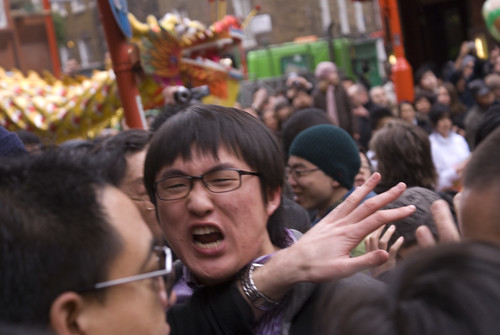 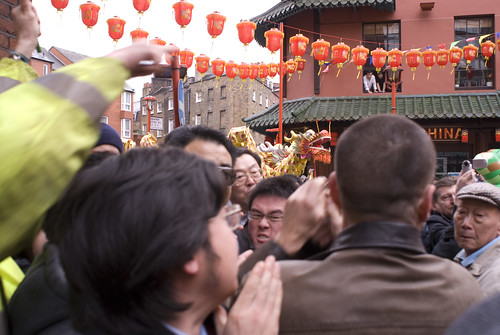 Ironically, there were now no police around to wade into the crowd and calm down the passions – they’d all moved on to protect the torch as it continued its journey. Finally common sense prevailed and nobody came to any blows.
I moved on to Trafalgar Square, where the Free Tibet protesters were really out in force. I didn’t see the torch pass through as the crowds were too deep but we got an explosion of blue paper alongside a trumpet voluntary. I saw plenty more Tibetan flags, and you might almost think that the police had decided to keep things moving faster than they might otherwise have done. 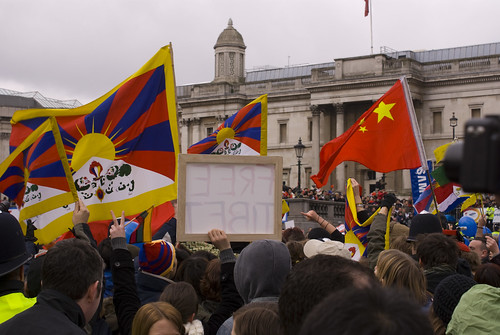 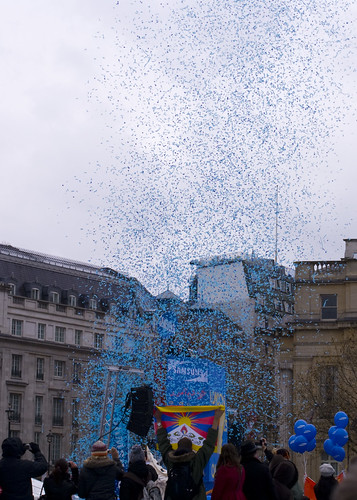 Next it was down to Embankment. The torch had headed off to Downing Street where it was going to remain for a while. I walked to Waterloo Bridge expecting the torch to arrive by river. If it did arrive that way, I completely missed it. There was plenty of evidence of police out in force on the water, and large crowds had gathered in front of the Royal Festival Hall, but they had other entertainment to keep their minds off the snow that had now begun to come down again. 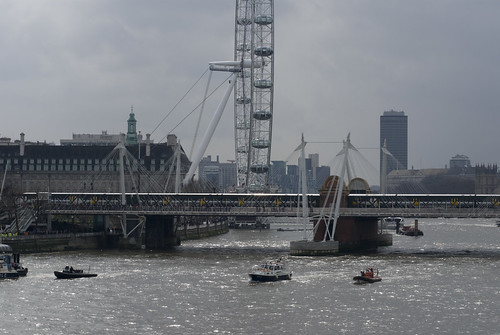 I waited on the bridge where the convoy of supporting vehicles had gathered. A Chinese camera crew interviewed one of the relay’s forthcoming runners – a fencer I believe. Then some people had their photos taken with another sportsman I didn’t recognise. I’m not sure they knew who he was either.
Again there were many Free Tibet protesters on top of the bridge, and the whole relay was now becoming a 31 mile rolling “Free Tibet” protest.
When the torch finally arrived, it was hard to make it out with the sheer number of police and security men protecting it. It seems somehow pointless getting people to come out to see something and then surround it by dozens of running men (my mind kept drifting back to that Clint Eastwood film In The Line of Fire, where Clint played a secret service man who’s job was to run alongside the Presidential cavalcade). In London, the relay runners were regularly replaced, but I’m not sure that the police had much let-up. Still, it’ll have been good practice for anyone running the London Marathon next weekend. 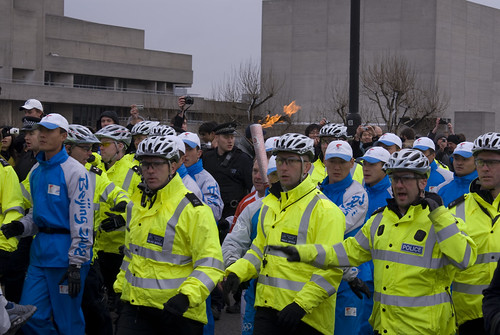 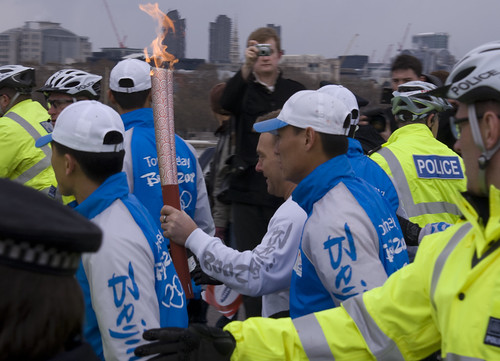 Aside from the quite scary events in Chinatown when it felt as though it might kick off at any minute, the day was interesting – if cold. I suspect that much of the rest of the route is going to see similar protests. I notice that the torch is due to pass through San Francisco, a notably liberal city. That’ll be worth looking out for.
(More photos here if you’re interested.)