The Guardian’s blog has one of those impossible discussions at the moment about how terrible TV is these days.
In terms of quanity there’s undoubtedly more dross to be found. But I can remember when we only had four channels – or even three – and there was still rubbish. But it was dull rubbish rather than inane rubbish.
Anyway, here’s a picture of tonight’s TV listings from the Radio Times once I’ve finished scrawling over it with a marker pen. I haven’t so much highlighted what I’ll watch as much as what is actually watchable on any level. 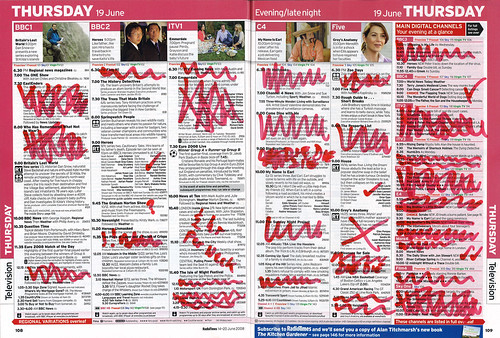 So immediately out are any soaps, most “lifestyle” programmes, dreadful comedies that should never have been “promoted” to late night BBC 2 (I think we know which one I’m talking about don’t we). Also immediately struck off are reality shows that dare not speak thy name, cooking programmes, cookery “lifestyle” programmes, unfunny comedites, property shows and most digital shows.
Any shows set in an auction room are next to go. As are programmes featuring Andrew Neil. While I’m happy for the BBC to run Sign Zone shows into the small hours (one feels that digital TV should be able to support signing as an option), most other channels’ late night offering would undoubtedly be improved by the reintroduction of the test card. Five’s US sport is fine, but the money grabbing show that precedes it should be shot.
Channel 4 is showing My Name is Earl, but I’ll never see it, as I won’t be watching anything on Four after the news until a certain show finishes its run. It’s just too risky to hit the channel button.
What about digital? Well forget ITV2 – that’s obviously not made for me. Likewise BBC 3. They might have “next week’s” episode of Heroes, but that just bumps their share up and destroys any semblence of a water-cooler moment the next day when you discuss the previous night’s show with friends or colleagues. Of course everyone really into it has long ago downloaded it anyway so…
ITV3 just reminds you how good ITV once was. ITV4 is great if you can’t get enough of The Professionals or The Sweeney. My tip – by the DVD box sets. E4 is pretty useless. A couple of decent shows hidden amidst a morass of repeats of Friends and spin-offs of the show that dare not speak its name.
More 4 does have The Daily Show, but an over-reliance on Grand Design and other property nonsense as well as Four’s coterie of cooks makes much of it avoidable. A shame really.
Film 4 is not the channel it started out as and the odd premiere of films like This Is England does not do enough. Sky One has Lost, 24 and Battlestar Galactica. You can put as many Shane Ritchie, Noel Edmonds and Dick & Dom shows on it as you like, I’m still not watching.
Now there are still some un-crossed out entries in my RT. There’s the football, and that single hour of Ofcom stipulated local non-news programming a week. Because of the football they’re both on tonight – in London a Suggs chatshow shot for about 50p in the back of a pub somewhere and in Anglia, another Suggs fronted show. He’s a good presenter you know.
There’s also a repeat of some Isle of Wight Festival highlights which are fine – but I was there at the weekend anyway.
The BBC has a decent looking documentary as a football alternative – Britain’s Lost World looks as though it’s trying to combine Springwatch with Time Team or something, but I expect I’m doing it an injustice. Question Time can be good (although frankly the interactive element is as pointless as a Victoria Derbyshire phone-in on Five Live). Euro highlights are fair enough. BBC 2 has some early evening light history and nature before a Springwatch spin-off entitled Springwatch People. The longest day of the year in the UK is this Saturday so I think “Spring” probably isn’t the most aposite title.
Heroes is fine, and will sit on my PVR until I get around to watching last week’s. The Graham Norton Show seems to have bumped the Heroes making of programme into a post Newsnight slot because half an hour (as this programme was originally scheduled for) just isn’t enough for Norton’s so-so humour.
Of the terrestrials we’re left with House which can be pretty good, Grey’s Anatomy strikes me as something I have no time for.
Then we’re into the murky world of digital. Leave BBC Four alone thanks a lot (although a bit more foreign TV drama wouldn’t go amiss – there’s simply nowhere in the UK to it apart from here. Bring on series 2 of Sprial please). And I think I’ve mentioned everything else.
So there’s enough to keep someone at least partially entertained if all they have is a TV and a Freeview box. There’s a lot of rubbish though, and PVRs will become ever more important for delving through the list to find it.
That means listings guides and even – goodness – TV reviewers (and previewers).
EPGs are all well and good but they’re a mess really. Sky’s new TV guide is fine, but the recommended shows are a joke. I doubt that there’s ever anything on Living or UK Gold that I’m going to want to watch thanks.
So the thesis that we’re at a low point is provably untrue. But it’s becoming harder to tell.

One Reply to “TV Tonight”