You’ll get better, more accurate, and more timely information in a thousand other places online tonight, but I’m still blogging the election.
10:21 GMT
So after I watched Obama speak, I did finally go to bed.
But here’s the map as it now stands with two states still to be added. 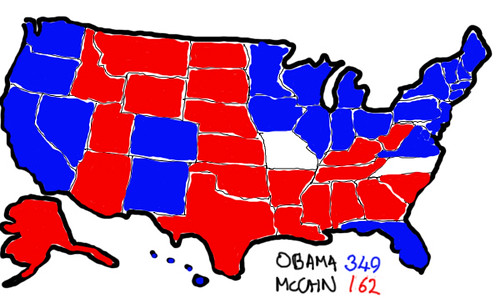 4:57 GMT
Still awaiting Obama.
The Minnesota race with Al Franken standing is terribly close. The Fox TV coverage is now – quite frankly – morose.
Alvin Hall is quite emotional. But I flipped over when Gore Vidal was being interviewed. We also heard from Tracey Chapman – what happened to her?
The BBC has a lovely interview with some Obama supporters in Culpepper, Virginia. 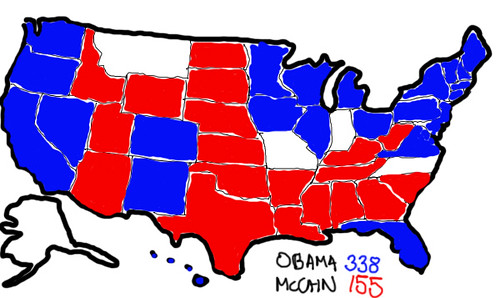 4:31 GMT
I’ve got to say that McCain’s concession speech was very respectful and very gracious.
Looking forward to Obama’s now… 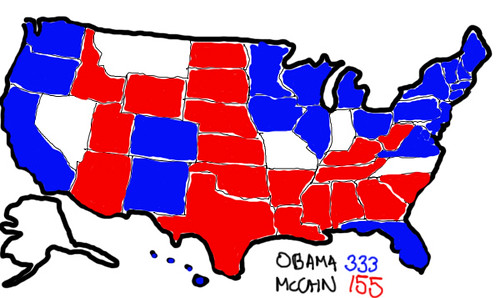 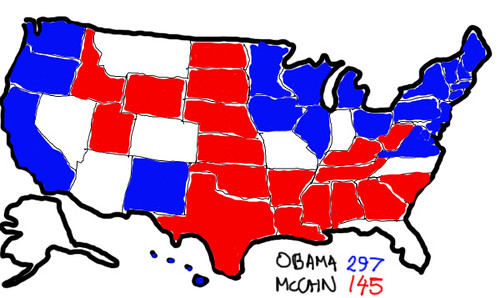 The celebrations in Chicago really are wild. And there’s are a few celebrations going on in Kenya where Obama’s father came from.
Fed up with Fox: “don’t forget, he’s not just black, he’s mixed race…” and then lots of stuff about whether he can bring the country together.
04:05 GMT
Jubilant scenes in Chicago!
Still plenty to add to the map. But America has a black president! 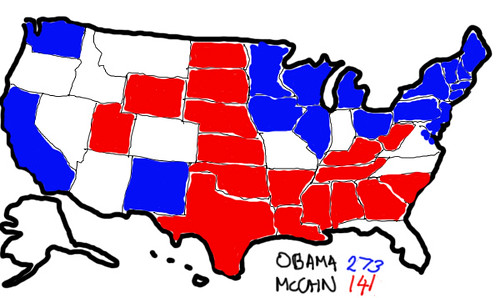 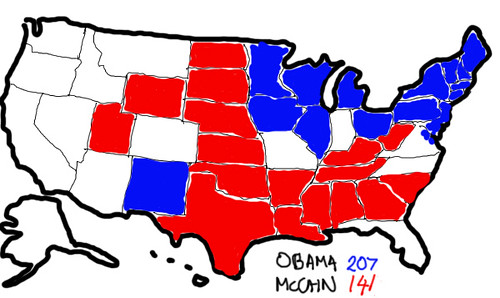 The Beeb’s talking about making it final after 4am when the next big states come in. I still want to find out how Virginia’s gone.
Jacob’s Creek Three Vines Semillon Sauvignon Blanc going down very nicely thank you very much.
03:46 GMT
I love it when Dimbleby gets bored of something. In this instance, Nancy Pelosi was giving a speech which he cut off with, “yah yah yah yah yah yah.”
Now we’re getting details of how and when McCain will make his concession speech which, traditionally has to come before Obama makes his acceptance speech.
Somehow I feel a little anti-climactic as 4am approaches. We know Obama’s going to win. We’re waiting for California’s polls to shut very shortly, and once those votes are added in, the concession may come.
03:35 GMT
Current discussion: what did McCain do wrong?
Bring back Christopher Hitchens!
Nebraska is one of two states where they break out the votes in a less straightforward manner. The Beeb is giving McCain three of the five votes. Updated map below: 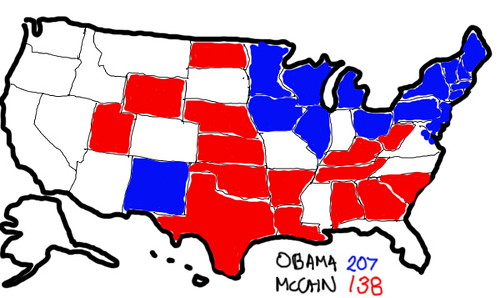 03:30 GMT
Earlier on we heard that Oprah’s been “pulsating all day” and is now in “full vibrational mode.”
03:22 GMT
Actually – CNN’s touchscreen display is also pretty good.
Why is CNN so far behind everyone else projecting states? They’ve only just projected Texas as going to McCain. I think I could have told you that about two months ago. The BBC had it quite a while ago.
It sounds truly depressing in the hotel in Arizona where McCain’s camp are based.
03:10 GMT
You’ve got to love James Carville on CNN. I always wondered what happened to Pierluigi Collina, but I never realised he had a southern accent.
CNN are projecting Arkansas to McCain which isn’t the biggest surprise of the night (Indeed – so unsurprising is it, that I already coloured it in below and added in the votes. CNN, overall, is much more conservative than BBC/ABC).
03:06 GMT
I actually quite like Fox’s interactive screen. It works pretty neatly. Sadly their online version of the map isn’t nearly as good. They’re pumping a truly ridiculous quantity of numbers on screen however.
Updated map: 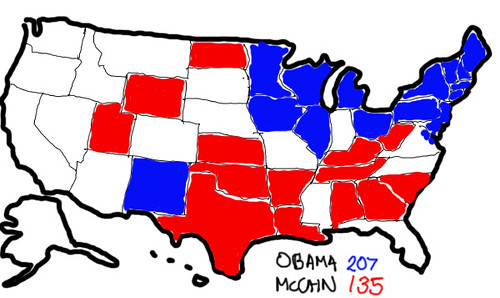 Eddie Izzard, of all people, is in Times Square on the BBC. I think he trumps Jon Culshaw (who seems to have disappeared from ITV – although to be honest, I haven’t been checking).
02:55 GMT
Florida is “very close.” I’ve heard those words somewhere before…
Oh dear – Jeremy Vine is “morphing” his map of the US again. It doesn’t add much.
02:40 GMT
Simon Schama calls Dimbelby a “wuss” for refusing to yet call the election for Obama. Dimbleby’s response is that Scham is a “very curious historian.”
Texas goes red, New Mexico goes blue. 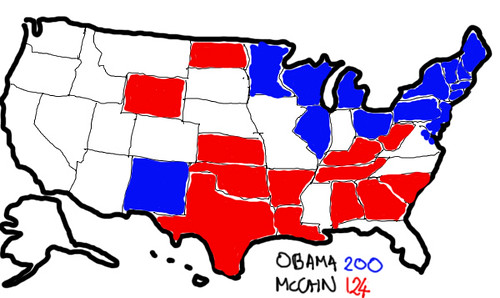 02:36 GMT
Oprah’s been “pulsating all day” and is now in “full vibrational mode.”
“If you believe in the tooth fairy he [McCain] can win California.”
Seemingly Arizona is tied – McCain’s home state!
The debate on the BBC is – how shall we say – robust. Simon Schama is giving as good as he gets over whether or not the US is fundamentally centre-right.
02:29 GMT
A few technical difficulties for the BBC’s news round up – the sound is all over the place. But sometime after Fox called Ohio for Obama, the BBC (for which I think we must read ABC) are now also calling it.
So here’s the updated map: 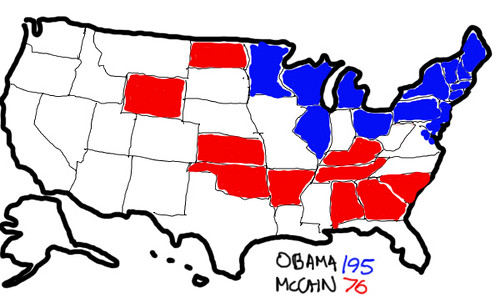 02:15 GMT
Long chat with my sister in New York about the election on TV. She noted the long faces on Fox News.
I fear that my “interactive” is now way behind. I think I was too dazzled by Jeremy Vine’s touchscreen technology.
01:38 GMT 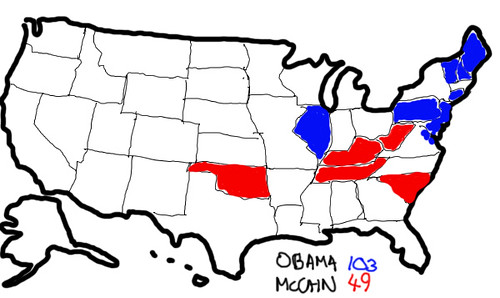 01:30 GMT
Fox News: “We’re now calling Pennsylvania for Barack Obama. This is a very hard one for…. the McCain camp to swallow tonight.” I’m sure you weren’t going to say “us” were you Fox?
01:28 GMT
Ooh. Fox really don’t want to call Pennsylvania for Obama despite other networks doing so. They claim it’s because they don’t have full data yet to compare exit poll data with actual voting numbers. It might be worth at this point highlighting Pollster.com where Mark Blumenthal has some fascinating stuff about the intricacies of exit polling. An American research company we use at work, Edison Media Research is one of the two providers of the exit poll data that all the networks in the US use for their election coverage. The networks do, however, retain their own analysts to interpret that data themselves. About 3000 people across the US are doing the exit polls today.
Doing a bit more channel surfing and strangely a channel I’ve never watched NDTV is showing an MSNBC feed which is different to the MSNBC feed that CNBC is offering. Strange.
France 24 (due to close at the end of the year?) is live at the US Embassy in Paris, but seems to have a CBS deal for footage. Al Jazeera’s numbers match the BBC’s. They seem to have a reasonable number of people on the ground. But the driest coverage surely comes from Russia Today who are reasonably indifferent to it all, although CCTV are ignoring it completely.
01:20 GMT
Over on CNN – Wolf Blitzer is still excited by all the technology they have at their disposal. This time around he’s liking the microphones they have. In particular those over the ear and round to the mouth jobs. He obviously doesn’t do a lot of online gaming…
At “Camp McCain” the Phoenix Boys’ Choir are singing relatively sombre songs.
Overall CNN is a lot more conservative than the BBC only giving Obama 77 votes compared with the BBC’s 134 at the moment.
Fox is giving Obama 81 but they’ve also got a few more votes for McCain that nobody else has given them yet.
01:10 GMT
Results are coming thick and fast. I’ve updated my “interactive” map: 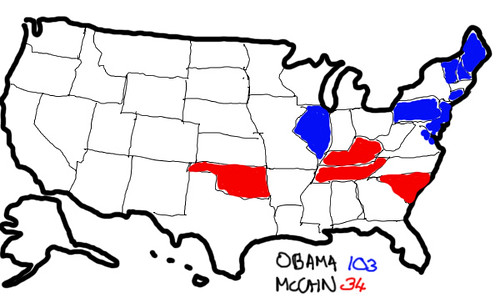 David Dimbleby is worried that Democrats in Chicago are getting “early voting figures” from Florida that he’s not seeing.
01:01 GMT
Ooh. Pennsylvania to Obama. We’ve just seen some balloons with 21 written on them in the Republican camp. Someone get a pin.
00:58 GMT
Another state’s been called (by the BBC, at least), so I’ve updated my map… The previous one has had at least 11 views up until now! 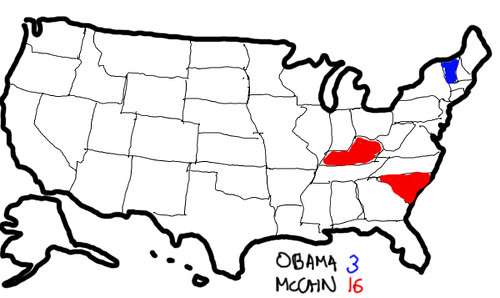 00:48 GMT
Richard Bacon on Five Live talking about the propositions that various states are also voting for: “…and in California they’re also voting about gay se… – gay marriage…”
00:42 GMT
I’m wondering whether all the “too close to call” states are really that, or whether the US networks are being very conservative about “calling” states too early on, when in previous years they might have?
McCain was getting all misty eyed about missing the reporters who’ve been travelling around the country on his plane in the last weeks and months.
Hitchens on Palin again: “…ludicrous contemptible figure…”
00:38 GMT
ITV has Jon Culshaw on its panel. Bring back Bingo Night Live! But they also have Bob Worcester who used to elections for the BBC. But then ITV is anchoring its coverage from London.
“30 Rock” is lit up in red, white and blue. No sing of their map of the US on the ice-rink though.
00:32 GMT
CNN are checking their “math” because their Florida numbers don’t add up. Maybe the Nader vote came out?
00:26 GMT
On Palin: “Believes in witches… [and] cannot tell the difference on the phone between President Sarkozy and Inspector Clouseau” – Christopher Hitchens.
Pic. of CNN’s “hologram” 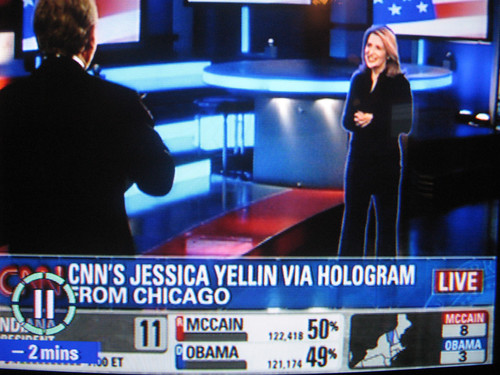 00:19 GMT
Fox News has a ridiculous amount of information on the screen.
On CNN, Wolf Blitzer is telling us “You’re about to see something you’ve never seen before…”
They’ve pointlessly (and badly) blue-screened their Chicago correspondent so that she appears in the Atlanta New York studio. What’s the point?
The caption reads “via hologram.”
Seemingly, the conversation can be more intimate if the correspondent can be “beamed in.”
We’re told that there are 35 different cameras pointing at her. They love the technology. It’s utterly pointless – really pointless.
00:08 GMT
Genuinely interesting news that CBS is projecting Virginia to Obama. That’d be amazing. As seen on Bloomberg of all channels.
00:04 GMT
How exciting! The first results are in, and I’ve updated my map! 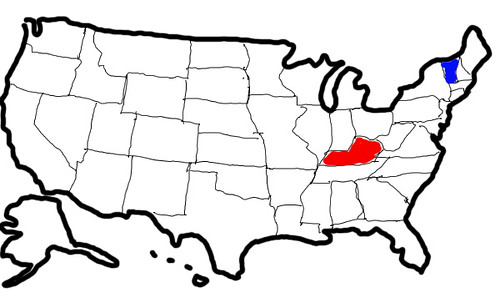 23:58 GMT
How UK TV “called the election” tonight (thanks to Andy in the comments for the idea): 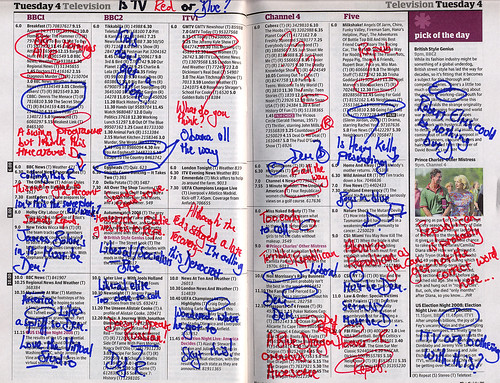 Click on the large version.
23:53 GMT
“You’re obviously voting for Obama. It says so on your badge.”
23:41 GMT
Hmm. John Simpson’s in Chicago. Who does the BBC expect to win then? David Dimbleby obviously wasn’t sporty at school and seems to be confused about whether Obama is out playing basketball or baseball. He decided that it couldn’t possibly be baseball because of the time of year – obviously oblivious of the World Series ending a week or so ago.
23:34 GMT
Rupert Murdoch on Obama: “I like him personally… but…”
It must annoy Murdoch that his NY Post backed McCain and it’s looking v. dodgy for him. He’d never let The Sun back the wrong candidate.
23:28 GMT
Jeremy Vine is “morphing” his US map again complete with OTT “glooping” sound effects.
23:11 GMT
The BBC seems to have chosen the noisiest balcony they could in the whole of Washington. Sky News is on a balcony somewhere in New York. France 24 is, er, in Paris. And Jeremy Vine is in Tron. Well he’s surrounded by virtual maps, and even virtual railings, that occasionally block out the numbers on the virtual map.
Fox News is taking apart some of the duller exit poll questions coming up with stats like “38% of voters approve of Sarah Palin” which sounds a little low to me.
CNBC is relaying MSNBC coverage but has cleverly replaced MSNBC’s ticker with their own ticker with share prices. Haven’t the markets closed yet?
The C4 documentary on Neil Morrissey’s new beer was quite fun, especially as I unknowingly tried it last week in a pub in the city.
22:00 GMT
Since everyone else is blogging it, and I’m nursing a foul cold, but have booked tomorrow off to specifically stay up tonight and watch the election, I’ll be damned if that’s not exactly what I do.
Anyway, every media organisation of note as a funky interactive map. Unfortunately, my Flash skills aren’t up to much, but I do have the map below which I almost certainly won’t be keeping updated all night: 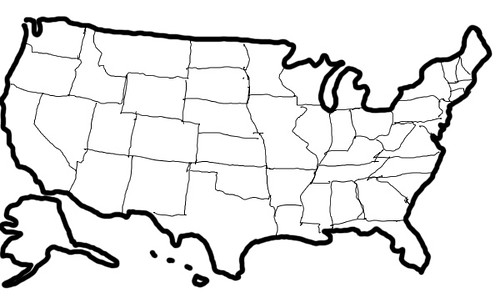 (I did look for something appropriate to draw with in Hamleys but they didn’t seem to have any Etch-A-Sketches in stock).