Last night BBC Two aired the first in a three part series – Who’s Watching You. It examines the surveillance state that we’ve been walking headlong into over the last few years.
Despite a very annoying production technique of sending everything in and out of focus like a small child was operating the camera, it put together a fair – sometimes “too” fair – look at what’s happening and how that data is being used.
I was thinking about a very similar subject when I stood atop Beacon Hill yesterday surveying the Chilterns and beyond. I took this photo: 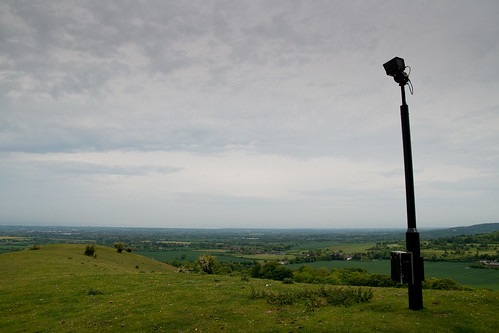 It’s not in any way Photoshopped (beyond usual processing stuff).
It’s only fair to add, that I later realised that my walk took me along the edge of the Chequers estate, and it’s entirely possible that this very subtle CCTV camera is part of that estate’s security system. Despite thinking that Gordon Brown doesn’t use Chequers, it turns out that he does most weekends so I expect he was off somewhere behind where I took this photo.
Given the fact that I took about a dozen photos, and the propensity of our law enforcement officials to approach people taking pictures of the most innocent subjects, I should count myself lucky to continue my journey unscathed (or perhaps they missed me because I took photos of the back of the camera!).

Previous Story:
How You Can Use Parliamentary TV Coverage…
Next Story:
Guardian’s Listings Get Worse

One Reply to “CCTV Is Everywhere”