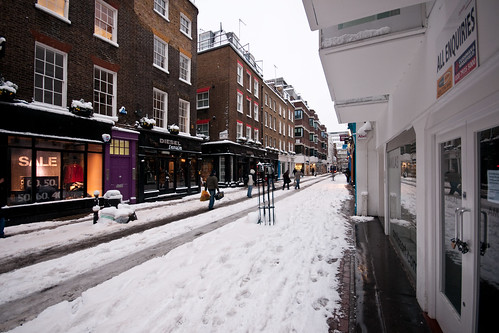 If you’re like me, when someone tells you something that sounds like an urban myth, you’re desperate to do your bit to put the other person right. So you do a quick Google search and end up somewhere where the question has been previously asked. Of course it’s an urban myth. Don’t be so stupid.
At Christmas I was visiting my family, having warily negotiated the ungritted pavement near where I live, trolley case in tow. There I was told that the reason so few pavements had been cleared of snow – especially in front of shops – was because shopkeepers were worried they’d be sued by people who had accidents if they hadn’t cleared the snow properly.
What? This couldn’t be true could it?
Well if it isn’t it’s a widely held belief. So I did some urban myth Googling and – it’s basically true.
According to this piece from the BBC News site in 2004:
Clearing snow from pavements outside your home could make you liable to legal action if somebody slips on ice, the government has said.
But if householders leave the snow, the council is liable, Lord Davies of Oldham, for ministers, told Tory Lord Burnham at question time.
—
Labour ex-minister Lord Dubs added: “Something I have done for years every time there has been snow is leaving me liable to legal action.”
Lord Davies said: “No householder is at all responsible, providing they do not touch the pavement, which is owned by the local authority.”
That couldn’t still be true could it?
It is. This piece dates from last year in The Time. Section 41(1A) of the Highways Act 1980 says that councils must maintain the highways, and although someone could go to the magistrates court to order a council to unblock a highway, such actions are unsurprisingly rare.
Private landowners are not obliged to clear snow or ice from the highway, even if the road or pavement passes over their land. Indeed, from a legal point of view it may be risky for private individuals to clear these areas. By sweeping snow from one part of the pavement you can create a danger in another area and if someone is injured, you will be liable for negligence or nuisance.
Furthermore, you do need to make your own property safe under the Occupiers Liability Act 1984 to make sure visitors are reasonably safe.
And thus, that’s why when the snow comes, nobody apart from the council is allowed to do anything. None of this would matter were it not for those horrendous ambulance chasing legal companies. You know the ones I mean – they advertise everywhere on a no-win no-fee basis.
In the meantime, thousands of people – especially the elderly – will be slipping and sliding in this weather, especially if temperatures drop and the snow freezes into ice.