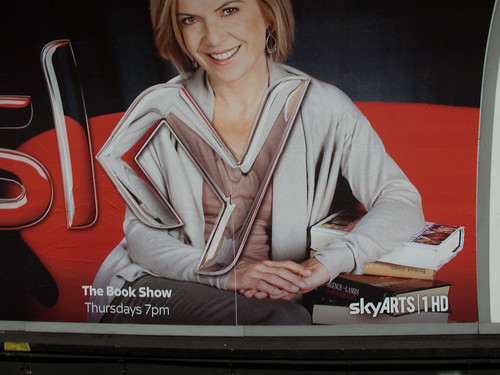 Sky Arts has recently been running a pretty large-scale advertising campaign for The Book Show presented by – as all literary shows seemingly have to be by law – Mariella Frostrup.
That’s fine. Sky Arts is a decent enough channel, even if you know it really exists so that Murdoch can argue for the closure of the BBC because the commercial sector broadcasts the arts – classical music and opera for example.
And I do sometimes watch The Book Show, especially when it goes daily during the Hay Festival of which Sky Arts is a sponsor.
But look closely at the books in the photo that Mariella is leaning against in the ad. 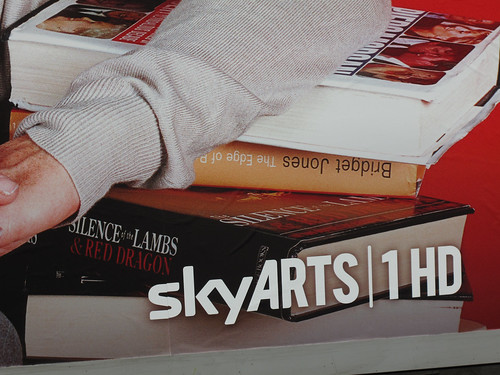 Even allowing for imperfections in the poster, those books do look pretty beaten up. And it’s not surprising, as they’re really not that new.
The top book appears to be a copy of Piers Morgan’s diaries which while populist, isn’t perhaps a true reflection of the programme. It was published five years ago.
Underneath that is a hardback copy of Bridget Jones: The Edge of Reason. While that would be a book that they’d cover on the programme, and is a good target market for London commuters, it is a book that came out in 1999 – over ten years ago. Isn’t there something a bit more contemporary? No wonder these books are a bit beaten up.
The final identifiable book on the pile is a real oddity. It’s The Silence of the Lambs – Red Dragon which is in fact two books in the Hannibal Lector series. Again – a massively popular series of novels, and titles from which would undoubtedly get coverage on The Book Show if they were published today. Except that this particular unusual edition which combines two of Thomas Harris’ novels, was published in 1991 – 19 years ago. And those curious editions of books that have two titles in one tend to appear in discount bookshops or come from book clubs.
I suppose the main thing is that it’s odd that nothing particularly contemporary is included in the stack of books. Perhaps a Stieg Larsson novel, or a Stephen King title? Ian McEwan, Alice Sebold or even Stephanie Meyer for all I care. Just current.
Instead it feels like the photographer and assistants at the shoot for the ad suddenly realised that they were going to need some books. So they rooted around in the corner of the studio and found a couple of books propping up a table or something and thought, “They’ll do – nobody will see them anyway.” Except that photo was then blown up and put on massive tube posters…

One Reply to “Advertising The Book Show on Sky Arts”