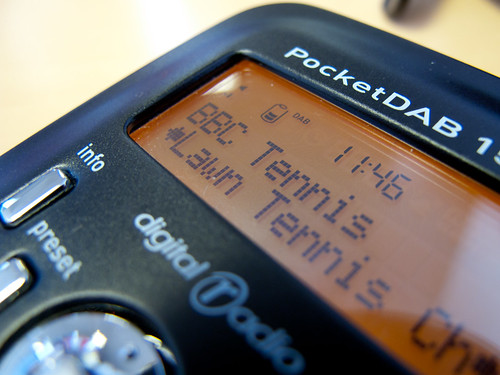 You’re a news and sport radio station.
It’s reached the stage in the World Cup where final group games take place simultaneously and you’ve promised listeners that you’ll cover all the matches.
It’s Wimbledon fortnight and Andy Murray has his opening match.
There’s an emergency Budget taking place in the Commons.
[UPDATE] And an England v Australia one-day fixture.
How do you cover all this? Ordinarily Five Live’s “sister” service, Five Live Sports Extra would suffice. But this week, there’s just too much happening. So you play around with your DAB multiplex, and you conjour up a new service: BBC Tennis.
The BBC really does cover Wimbledon well. Last night when I got in, I had the choice of six live games on satellite (Freeview viewers get slightly fewer). And then there’s the HD TV coverage.
For the technically minded, this service has the effect of knocking Radio 4 down to 80k mono. In other words, it occupies the space used by Parliament and the Daily Service during other Radio 4 opt-outs.
Incidentally, I believe Talksport uses DAB and AM to offer listeners a choice of either game during these final stages, although I’ve not been able to confirm that on their website. As digital platforms become more popular, this is going to become a harder decision to make. If loyal listeners have purchased DAB sets, then they might be disappointed to have to dig out an AM radio to hear an England game when the less popular fixture has been put on the digital platform.
I did notice that Talksport is not carrying streaming coverage of their games however, which surprised me since Five Live is. This is almost certainly due to Talksport’s ability to geo-IP block since their rights almost certainly only extend to the UK. [UPDATE] This is due to the additional fees FIFA wanted to allow streaming rights (See comments below).
One way or another, you’re spoilt for choice with sport on the radio.