The BBC and Marketing Speak 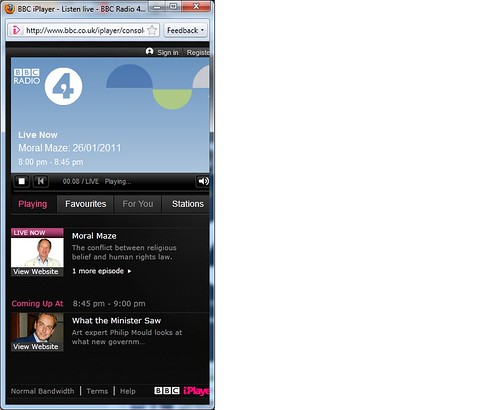 Yesterday a BBC blog entry from Daniel Danker, the Programme and On Demand General Manager at the BBC, caused something of a stir.
It referred to a new “product” and there was much gnashing of teeth and concern as a result.
I’ve got to say that I think that this probably isn’t the clearest communication I’ve ever read. You only need to read listener comments and Tweets to realise that this has confused a lot of people who are concerned that Listen Again might not be available in the future, or they won’t be able to hear BBC Radio on their internet connected devices.
Currently, if you stream a live BBC Radio service, or “Listen Again” to a previous programme, you do it in a player that’s branded “BBC iPlayer”. Because, in the future, iPlayer is going to be for television services only, keen radio listeners are suddenly concerned that features and functionality they currently enjoy will be lost.
However, if you read carefully, and cut through some of the language, aside from changes on some websites as a result in the cuts to BBC Online, overall services will actually improve.
For live listening to BBC radio services, the Radio Player which is being developed by the BBC alongside commercial competitors including Global Radio, GMG and Absolute Radio (my employer!), will become the default platform if you’re streaming from a BBC website.
But what of this new “product”?
“Yes, we do plan to build a new product for radio but this isn’t to cut corners, or downplay what we do for radio online – as with everything we announced yesterday it’s because we want to make the service better, not worse. In the case of radio and music, we think this means giving radio its own home.”
Well I think this is another unfortunate case of “marketing-speak” being used in consumer communications. And, yes, I’m aware that I’m using a certain amount of that language in writing this sentence. But this is slippery slope that we’re already well-down in some areas. Back in 2007 I talked about “premium” being used far too much in the mainstream. “Content” is another word that has also strayed out of the marketing and management arena, and into widespread usage.
The issue here is that if somebody talks about a “product”, I think most people expect a “thing.” If that “thing” is just a revamp of websites, and that’s what I really think that the BBC is talking about here in essence, then “product” is the wrong word to use.
That’s why some people are half expecting the BBC to build another pop-up player to sit alongside the Radio Player. But I’m certain that’s not the case. I think that the BBC is essentially going to be doing a lot more behind the scenes to build social elements into its websites, be cleverer about using metadata attached to programming to build links between different parts of stations’ sites and link together similar programming across different networks, and simplify the “Listen Again” experience.
Disclaimer: I could be wrong about the above. I’ve not directly talked to anyone at the BBC about this, but this is based on feedback I’ve seen online, and from other conversations I’ve had.
Further Disclaimer: These are my views and don’t necessarily reflect those of my employer.
And finally a plea: Can someone please get Frontier Silicon to update their list of on-demand BBC programmes (referred by them, using rather unhelpful nomenclature, as “podcasts” irrespective of whether they’re downloadable), on a DAILY basis? As things stand, you get a sometimes rather random list of recent programmes including broken links to some programmes to which listen-again rights have expired, while recent editions are missing. Ideally, this list should be generated hourly.
Oh, and finally, does anyone really think visitors to the BBC Radio entry page can really tell the difference between the two Five Live logos they’re presented with?

Yes – I know that one is for Five Live, and the other for Five Live Sports Extra. But I can’t tell that from the logo. Indeed, it’s unclear to me why Extra needs its own website at all [Correction: It doesn’t have it’s own website, but the carousel page from the button above does include links to things like it’s schedule].
[Update] Chris Kimber’s comment below is well worth reading. I think I may be wrong in my suppositions here about what the BBC is working on. What’s clear is that it’s a way off. And I guess what really intrigues me is how, if at all, it fits in with Radio Player…

9 Replies to “The BBC and Marketing Speak”