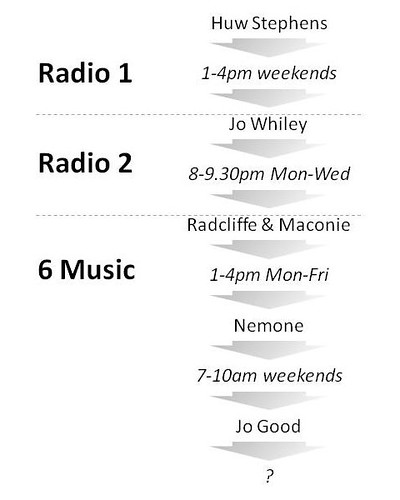 A bit of switching and changing today at BBC Radio, with Jo Whiley moving over from Radio 1 to Radio 2, while Mark Radcliffe and Stuart Maconie move on to 6 Music.
They’re the big stories, but as the graphic above demonstrates (Disclaimer: as I read it from the press releases), there’s an overall shuffling around of musical chairs.
Overall, I’d say that these are decent moves. Without getting into a whole ageism debate about how old is appropriate for Radio 1 presenters, Jo Whiley moving networks after 17 years seems sensible. She adds another female voice to the network, albeit one that’s still without any females between 6.30am and 8.00pm.
Meanwhile, Radcliffe and Maconie are surely made for 6 Music. Stuart Maconie already presents Freakzone on the network, and devotees will be pleased that this continues. There’s a bit of shuffling around at 6 Music with Nemone taking over the weekend breakfast show. While back at Radio 1, Huw Stephens gets the big weekend shows that Whiley had while maintaining one of his currently very oddly disjointed evening shows (9-10pm and then midnight-2am on Wednesday nights).
That does leave a little space in the schedule at 9pm on Wednesday for Radio 1 to do something interesting, rather than simply extend another show’s hours. And Whiley’s new show finishes nightly at 9.30pm rather than 10pm. So it’ll be interesting to know what Radio 2 is going to do with that extra half an hour. Post 10pm tends to be quite specialist, so perhaps there’ll be more of that in future?
The digital radio advocate in me is pleased that a significant number of Radcliffe and Maconie fans will discover digital radio via one platform or another as a result of this move, and that can’t but help the growth of the medium.
Reports correctly point out that Radcliffe and Maconie will see an audience decrease as a result of the move, and comparing RAJARs shows this to be the case with their current slot achieving 1.66m compared with their new slot’s current 411,000 reach (RAJAR Q3 201). But I’d assume that Bob Shennan is hoping that the pair grow this audience to something closer to their current level.
Anyway, most of the changes take place in April.
[Disclaimer: These are my views, and not those of my employer, who’d much rather you listen to Absolute Radio rather than any of this BBC stuff. The Hometime Show with Geoff Lloyd is coming from New York this week!]