Radioplayer is finally here!
Indeed, if you listen via the internet, you may have already spotted it, since it has been live for a few hours now.
I’ve got to say that this is a really exciting development for the UK radio industry, and I don’t just say that because my employer is one of the founder members.
So what is Radioplayer? There’s three key parts to it:
– A common interface across all participating radio stations and groups’ players.
– A search facility that let’s listeners search for programming across both commercial and BBC services.
– Personalisation of the player with presets letting you save your favourite stations.
In the same way that you use a single radio set to listen to lots of stations, Radioplayer will use a single backbone to let listeners choose all the radio they want to hear in a simple and easy to use manner. 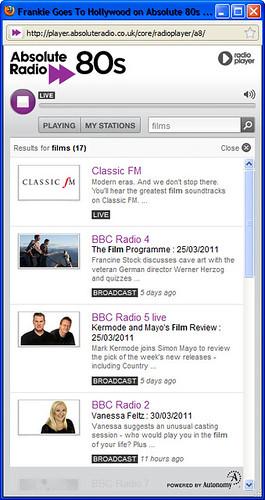 The search functionality means that listeners will be able to discover programming that perhaps they never even knew about. 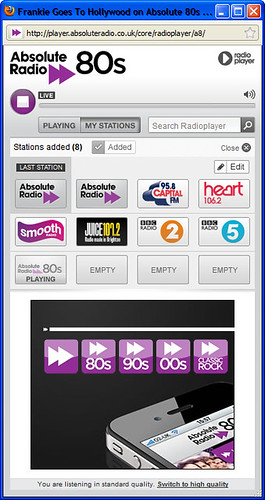 And the personalisation means that it’s easy to flip between stations and programmes at will once you’ve added them as presets.
Together, there’s a strong belief that this will lead to a vastly increased amount of radio listening via the internet. Currently the internet only accounts for 3.1% of radio listening, and surprisingly, while the average listener tunes into an average of 2.7 services, those who listen via the internet only listen to an average of 1.6 services a week.
Why is that? Well in many instances it’s been quite hard. Those who’ve been using the internet for more than the last five minutes might well remember the pain of having to install RealPlayer or ensuring that their Windows Media Player is up to date. The players were at times very user-unfriendly. Since every station essentially went away and built their own players nothing was consistant between different services’ internet offerings.
Radioplayer offers consistancy. And like your physical radio, if you want to tune into a different service, you can painlessly. Commercial stations can run advertising and pre-rolls. And every station can personalise itself so that it’s relevant to that station’s listeners. There can be links back to websites, and “listen again” or podcast material can be made available within the player.
This is a genuinely exciting piece of technology. And it’s remarkable that so many stations and groups have agreed to come together to promote this service. Listeners are going to explore and discover more radio which is a great thing for everybody.
The one thing that groups will need to do is to ensure that they have accurate, up to date and relevant metadata for the search engine.
In the meantime, head over to a radio station that’s a launch partner (and plenty more are coming on stream very soon), like Absolute Radio, or the Radioplayer site, and launch the player to have a play yourself!
And there’s a nice piece on Paid Content.
Source for all data: RAJAR Q4 2010