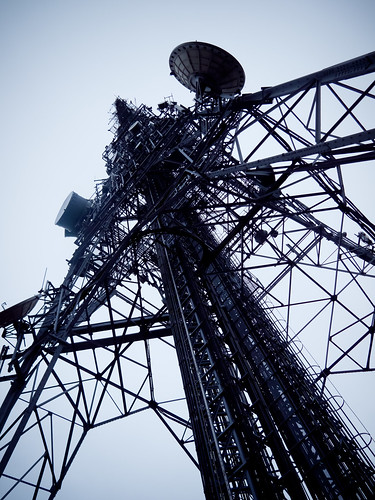 If a tweet from BBC Radio Nottingham editor Mike Bettison is to be taken at face value, the BBC is considering some kind of merger between BBC Local Radio and BBC Radio Five Live.
This idea mirrors something that James Cridland pondered in a blog posting on his site last year. Except he talked about merging Radio 4 and BBC Local Radio.
At the time I said in a comment, that was a bad idea. Mostly because Radio 4 and BBC Local Radio’s audience were completely different, but also because this would reduce local radio choice.
Switching the idea over to Five Live is initially intriguing. BBC Local Radio already carries Five Live as a sustaining service overnight. And occassionally BBC Manchester and Five Live share commentaries of Man Utd matches. A reformatted service could mean that the BBC was able to switch off AM. The new service could potentially exist on FM alone, saving the BBC some of those expensive AM transmission costs. AM can’t be localised on 909/693 to the extent FM can, so unless an AM version continued with different programming at certain times of the day, using AM would be an unnecessary use of spectrum.
But overall it’d be a bad idea. And here’s why: 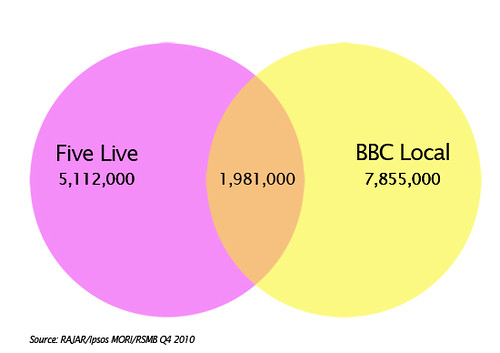 Five Live is much more male than BBC Local Radio (72.0% v 54.1%), and more ABC1 (67.4% v 53.2%). Most importantly, BBC Local Radio seriously serves BBC radio’s older audiences. 54.3% of BBC Local’s audience is over 55 compared with just 35.5% of Five Live’s. As I never tire of banging on about, the elderly are very underserved, particularly the less upmarket elderly. And this is a growing audience. With discussions suggesting that BBC2 TV should shut down during the daytime, the disenfranchisement of an elderly non-upmarket listener is concerning. All told, these services serve very different groups of people.

This may prove to be nothing to be worried about, but it’s clear that with some significant cuts to made across the BBC, lots of ideas are being thrown around to meet these new lower budgets. TV is surely the area to be going after rather than radio. And BBC Three has to be service that really needs pruning back with commercial competitors already in place, and much of the remaining PSB programming quite capable of finding a place on one of the other networks.
BBC Local Radio does feel unloved from my external point of view. I find it odd that it doesn’t fall under the remit of Tim Davie who is in charge of all of the rest of the BBC’s radio services. But cutting costs in this way is not the answer. Radio audiences would be left very under-served.
[UPDATE] Here’s The Guardian’s take on the story.
[As ever, these are my own views, and don’t necessarily reflect those of my employer. You know the drill.]

Previous Story:
Radio Silence
Next Story:
What Will The Beeb Suggest Shutting Down or Cancelling Next?