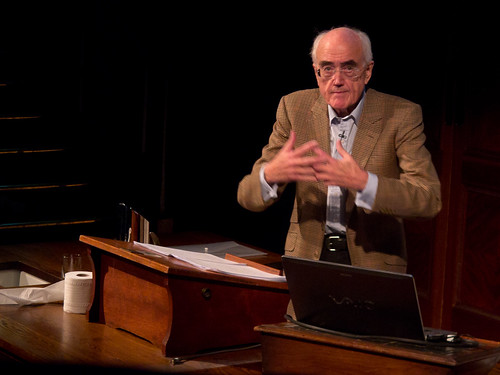 If you’re old enough, you might know who James Burke is. He was the presenter of a TV series that had an enormous impact on me as a child – Connections.
First broadcast in 1978, I think my viewings came in later repeats – especially (if my memory serves me) during school holidays when the series got repeated in the mornings. The series was built around the history of so many advances made around us are brought about by what can sometimes be the most random of connections between unotherwise completely unrelated people and subjects.
It was one of those series that had a globe trotting presenter, and I suppose to me was as fundamental as Civilisation or The Ascent of Man (both extraordinary documentary series) had been to viewers a few years earlier.
Burke later followed Connections with The Day The Universe Changed which I remember being heavily promoted at the time. It took the same sort of idea, distilling the development of a whole scientific or industrial process down to a single idea thoroughly unrelated and developed years earlier and perhaps thousands of miles away.
Later Burke made two further series of Connections for US cable TV, although as far as I’m aware, these haven’t been widely seen in the UK. Previously Burke had been a presenter on Tomorrow’s World – although he pre-dated my viewing of that series. And he’d been part of the team that covered the Apollo landings. I know this not just from reading it online, but from the repeats of that coverage that have occassionally aired since.
But more recently, I’d completely lost track of him. Until tonight! 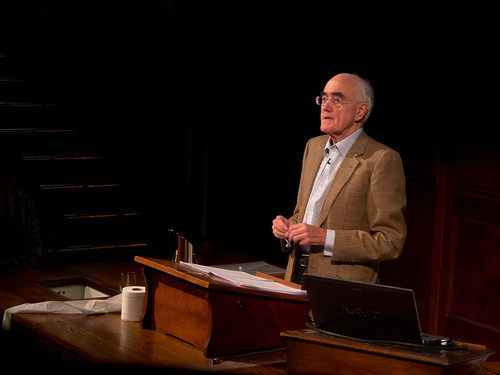 Burke presented 1 + 1 = 3, very much in the spirit of the programmes that had made his name years ago.
The lecture formed the second of a three part Connections series being curated by Alex Krotoski at the Royal Institution. I missed part one, but am now tempted by next week’s part three.
Burke strongly believes in the importance of making multi-disciplinary connections between sometimes utterly dispirate things. He delights in presenting those findings, and relates many tales of them. But then he says – of course anyone can do this given enough time.
He also demonstrates a very early prototype of some software that he’s working on to faciliate this connectivity for children to learn about.
The final part of his lecture delves into what might happen in the future, and here we take a leap into the unknown. For Burke, nanotechnology is key. And the consequences of a nanotech world are all encompassing. He says that there’ve been two fundamental changes to our culture and society in history – thousands of years ago when the first crops were cultivated, and then the 18th and 19th centuries with the industrial revolution. Both were game changing breakthroughs. Nanotechnology will be the next step.
His predictions are bold and scary. Will we all essentially have free power and free nano-factories to build whatever we desire, allowing us all effectively to do as we please? It seems like something from a science fiction novel, but who knows. Nothing’s utterly implausable – although it does feel unlikely.
In the Q&A that followed his lecture, someone asked why he wasn’t back on BBC2. And that’s an excellent question. He was very polite about it, but it’s clear that he’s still an excellent presenter, and there’s no reason why he couldn’t still be doing the job. Yes – we have Brian Cox, Marcus du Sautoy and Jim Al-Khalili who are younger (And sexier? Well perhaps one of the three). But then we also have Sir David Attenborough who we can still send to the poles aged 85.
I’d love to see him back on television presenting something similar to Connections.
The Royal Institution was videoing the whole evening, so I do hope it ends up on their website. Because he went at such a pace as to make note taking impossible. 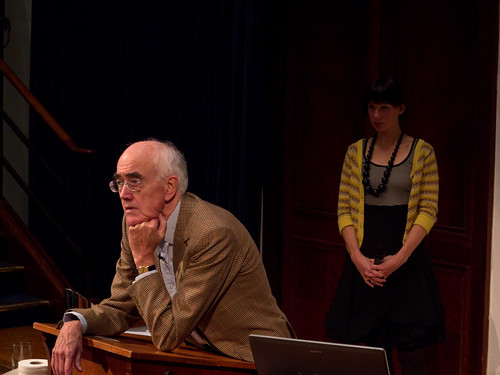 Incidentally, I’ve linked to Wikipedia references quite a bit throughout this piece, but I don’t think that Burke would appreciate those links. He’s quite critical of Wikipedia – mainly because there can be things wrong on it, and you simply don’t know if what you’re reading is wrong.
And while you don’t seem to be able to get either the first series of Connections or The Day The Universe Changed on DVD (surely an opportunity for some enterprising DVD label), you can see the former series, and it’s follow up on YouTube.