We all know that if we buy bigger packs of products, we tend to save money. But in the strange world of confectionary, that’s not always the case.
I was in Waitrose earlier, and it being February, there are clearly lots of Cadbury Creme eggs about.
But the pricing was slightly odd. 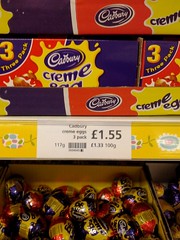 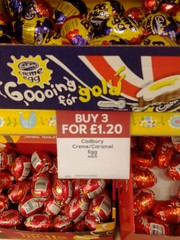 So anyone who wants three eggs should buy loose ones.
But wait! For just 32p more, I could buy a box of six Creme Eggs. 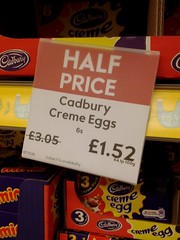 That’s just over 25p each. And for some reason a box of six is actually cheaper than a box of three. Probably not going to help the diet.
Maybe I six doesn’t cut it. I should get a larger pack and try to save even more! Handily, there’s yet another special offer. 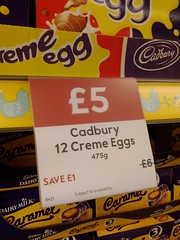 I can get 12 Creme Eggs for £5. But that’s just under 43p each – and much more expensive than buying in sixes. Indeed, it’s cheaper to buy them loose in threes rather than in a large box.
I suppose the thing to note here is that if you’re buying Creme Eggs in Waitrose, get them in sixes.
I shouldn’t be surprised. It’s usually always cheaper to buy loose fruit and veg rather than pre-packaged ones. And when products have a multiplicity of special offers, it’s not always obvious what the cheapest way is to buy soft drinks or beers. And Which recently launched a campaign to aid consumers in unit prices.
I was still surprised by quite how disparate this pricing was though.

One Reply to “Curious Pricing”