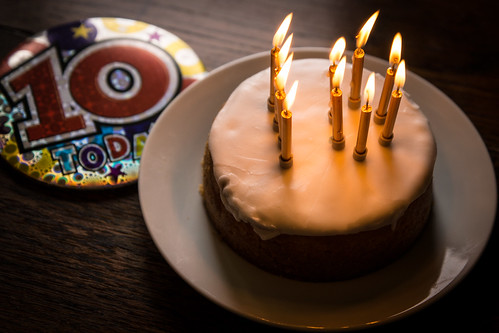 Ten years ago today the a new site took the internet by storm. adambowie.com was launched.
OK. Maybe the internet wasn’t taken by storm. This was 2002, and while Google was already in existence, there certainly wasn’t a YouTube or Facebook.

And everybody was launching their blogs. OK. We were very much post the dotcom boom of a couple of years earlier when the likes of Boo.com had been foundering. But blogging was the big new thing. And although it may no longer have the growth it once did, I’d argue that it’s not gone away, even if these days Tumblr is cooler than WordPress or Blogger for no discernible reason.
I couldn’t help noticing that Steve Bowbrick’s blog launched about a month ahead of mine. Blogging is clearly where it was at in 2002.
To be fair, I did have varying web presences under my control prior to 2002, with a website in existence since about 1997 or so. But it was with the start of adambowie.com that I really got involved.
In case you’re interested, here’s my first entry. It’s that kind of insight that’s kept people coming back year after year.
The blog has had a couple of makeovers during those ten years, but nothing incredibly substantial. I’m still using Movable Type to power it, as much because it’s really hard for me to move as anything else. Commenting has never been easy, so I’m just about the only place left on the web not using Disqus to power comments.
I suppose I should have some kind of list of stats telling you how many people have accessed this blog. But I don’t since I only started properly monitoring the site’s performance when I added Google Analytics in November 2005.
But Google does tell me that within that time I’ve had 144,000 unique visitors. That partially explains why there’s no advertising on the site. Well that, and the fact that I don’t like advertising on a personal blog. Actually that’s not entirely true. On the rare occasions that I trouble readers with some books I’ve read, I do place affiliate links to Amazon. However, I’ve never earned enough money from those links for Amazon to so much as give me a pound in fees. On the other hand, I continue to spend a fortune with them.
Still digging into Google does always bring up a few entertaining bits and pieces. Remember, that although I’ve never completely focused this blog on a given subject, things related with the media (and radio in particular) tend to outnumber other entries.
The most popular individual blog items that I’ve published are as follows:
1. A piece from 2007 exploring which parts of Strictly Come Dancing are pre-recorded, and which aren’t. This of course, predated all the “openness” and “honesty” that broadcasters now have to abide by. I’ve no idea why this particular piece was so popular.
2. An entry from 2004 about what was happening to the YHA’s “Adventure Shops”.
3. A piece from 2005 heralding the arrival of series two of the still excellent Radio 4 series, Ed Reardon’s Week, a series I still love.
4. A 2006 review of a Bush WiFi radio that was widely available in Argos. I must admit that only a couple of weeks ago, I threw this out having left it in a wardrobe for a couple of years. It simply won’t talk to modern secure WiFi routers.
5. A quick 2010 review of the HTC Desire fairly soon after it was launched. Regular readers will know that I’ve only recently upgraded to an HTC One X.
6. Exasperation in 2011 that a programme like Mrs Brown’s Boys gets commissioned when something like Pulling gets cancelled. I still don’t understand this.
7. My annotated Radio Times pieces collectively. I’ve not done too many of these recently, but there’s a special birthday edition on the blog now!
8. Thoughts on the re-jigged Radio 1 line-up in summer 2009.
9. Why, in 2008, I was highly suspicious about how Derren Brown’s The System was produced. Again, this pre-dated the recent “issues” surrounding television production and honesty.
10. My failure to produce an Excel “Euro 2004” spreadsheet. Beginning with Euro 2000, and again with World Cup 2002, I’d produced rather popular “wallcharts” that worked without dangerous macros that might prevent some from using them. Sadly my Excel skills were not good enough to keep up with UEFA’s (and FIFA’s) rules surrounding how to treat teams level on points in the group stages. I haven’t done a Euro 2012 spreadsheet either.
It’s always fun to see what search terms generated the traffic over this time and led to people visiting my blog. But over a long period of time, they tend to be a bit dull, and broadly reflect the entries I’ve mentioned above. Strangely “adam bowie” is the top search. You will find me that way.
Other curios (which don’t make a great deal of sense to me) include:
“itv schedlue tonight” – I’m not going to be that helpful
“the+real+hustle” – I had similar suspicions to those I had of Derren Brown
“is wifi dangerous” – probably not
“thelondonpaper” – remember that?
“keep calm” – yes, I made one of those signs too
“paranormal egypt” – it’s not
“abby titmuss” – her name is “abi titmuss”
“shocking websites” – you’re going to be very disappointed
“danny baker podcast” – you’re looking in the wrong place
“jonny greenwood doghouse” – I believe I actually broke some new here
All of those have led well over 100 people to this site.
So what am I doing in celebration of this blog’s tenth anniversary? Not a great deal.
I did take the photo shown above. And if you’re not reading this in Google Reader (how excited we were about RSS feeds) then you might notice that I’ve added some additional random header images for just about the first time in years.
But onwards and upwards. Here’s to the next ten years!