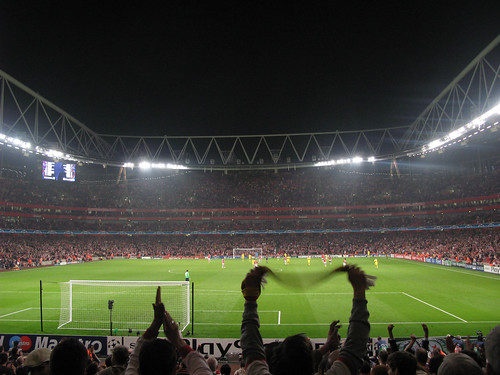 Recently News International won the rights for both mobile and internet highlights pacakges from the next season. These are the packages that are currently owned by ESPN (mobile) and Yahoo (internet), neither of whom will have any rights from next season.
According to a source at The Guardian, News International paid £20m for these rights. What’s not entirely clear is whether that’s £20m pa or £20m for the life of the three year deal. I suspect it’s probably the latter. [Update] A separate Media Guardian piece puts the value at about £30m over three years. The piece also suggests that News International outbid sister company Sky, as well as Yahoo and Perform.
The actual value of Premier League rights auctions is confidential unless the bidders choose to reveal it. Sky and BT essentially have to reveal the costs because they’re so great, they impact on the revenues of the businesses.
But the actual value of these rights, is always a bit questionable. Since they started to be awarded – mobile from the 2001/02 season and internet three years’ later – the rights have never stayed with the same rights holder beyond a single season.
The table below shows who’s owned the rights since they started being awarded:
UK Mobile and Internet Premier League Rights

The other major factor that comes into play is that the BBC has negotiated a deal to allow Match of the Day to appear on iPlayer from the start of the 2013/14 season. It’ll only go online early Monday morning, but hitherto, it’s been the single notable missing part of the iPlayer. Interestingly, Match of the Day 2 is on the iPlayer and usually features all the goals from Saturday’s games too in brief highlights.
But the fact that there’s a free to air alternative to these rights. Having brief highlights is still a commodity of value – with internet viewers traditionally having shorter attention spans. To see that Wayne Rooney goal, it’s easier to just load up the Man Utd short-form highlights rather than scrolling backwards and forwards through a full episode of Match of the Day.
ESPN’s goals app has been an excellent service for the last three years. However you suspect that they’d have loved to have monetised it properly. Instead they gave it away as a kind of loss-leader to promote the TV channel. Yes, there are advertising pre-rolls, but it’s doubtful that they will have fully mitigated the overall investment.
What the app does have is “post match pub appeal”. You’re out and not at home able to watch Match of the Day or Football First on Sky. So you boot up the app and watch the salient bits on your mobile.
Of course there are oddities. ESPN was only allowed to to stream its goals to “mobile” devices – defined as devices with a SIM card. So it’d work on an iPad with a 3G SIM in it, but not in a WiFi only one (the more common device). There’s nothing to stop you streaming the app via WiFi once it’s passed this test.
The reason for this is because the Premier League had separately licenced internet rights to Yahoo, and it had to differentiate them accordingly. It’s no good trying to say that the internet and the mobile internet are… well… the same thing just differently optimised. As 4G grows, and mobile devices become more sophisticated, that’ll very quickly be a distinction few aside from lawyers will be able to make!
The interesting question will be whether or not News International is forced to keep that somewhat arbitrary separation in place. 60 second clips come into play from Monday mornings (as with the BBC’s iPlayer highlights), so are less relevant. Mobile rights are brief 30 second clips, and are instant except during the 3.00pm “window”.
I must admit that I always felt that Yahoo didn’t really do enough with its rights. Theoretically valuable, I don’t think that football fans used Yahoo to seek out their football highlights. Did you miss that unbelievable goal at the weekend? You probably just searched YouTube to find it. Yes, the Premier League is pretty hot on getting illegal uploads removed from YouTube and other sites, but a great goal can always be found.
I was never sure what Yahoo was trying to achieve. Aside from those rights, I never felt that Yahoo became the destination for football news. Other sites did better and cleaner jobs. And because Yahoo’s sports section is co-branded Eurosport, it was an odd bedfellow. Eurosport doesn’t have any Premier League rights. So it would never be a destination for that sport (tennis and cycling, on the other hand, are right up their street).
How will News International monetise these clips? I suspect that there’ll be a twofold approach. If you’re a subscriber to The Times or Sunday Times, their match reports will now be “illustrated” with goal clips – something no other publisher will be able to do.
And then there’ll be paid-for apps that give you access to these clips – free if you’re a subscriber.
Because The Times and The Sun have different attitudes towards paywalls, there’ll have to be a sensible way around that doesn’t disincentivise people from paying for rights. Perhaps part of The Sun will go behind a paywall.
Mobile is getting bigger, and every time these rights come up, the view is probably that now is the right time. But in the end, I suspect that Dan Sabbagh on this week’s Media Guardian podcast is right. They’ll have these rights for three years, and then someone else will pick them up with their own strategy for monetising them. However, we shall wait and see…