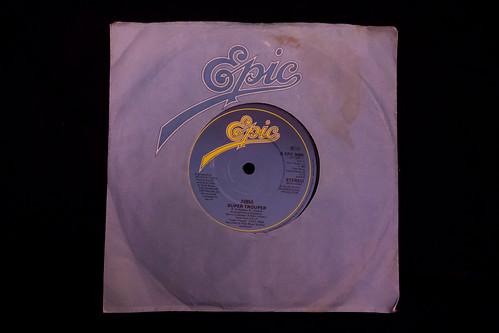 Today came the sad news that another batch of 37 HMVs are to close within the next few weeks. Included amongst them is my local HMV – a shop where, on and off, I’ve been shopping since 1980.
Indeed, the first ever record I bought came from that branch of HMV. Yes, at some point in late 1980 I bought Super Trouper by Abba for about 99p (which puts into perspective the fact that a single today on iTunes is likely to cost 79p. By this calculator’s measure 99p in 1980 would be £3.95 today).
The assistant turned around and picked it off the shelves behind them where all the singles were kept in chart order. I remember being disappointed that the single came with just a generic pale blue Epic sleeve, and not something with a picture.
I excitedly returned home to play it on my mum’s old record player, which dated from some years previously. It had almost certainly never had a new stylus, and the speaker was built into the record player which still had a 78rpm option. I was devastated when I discovered that it had a scratch! The following day – was it half-term? – I got a replacement.
My friend from next door also bought a copy. I think it was his first record too. And he too had to get his replaced. Perhaps there was a problem with the batch. I think Super Trouper may have already been at number one when I bought it, because I remember being disappointed when it started to drop out of the charts fairly soon afterwards. I’d bought it, so it should still be at number one!
HMV was one of a number of places I could buy records locally. There was an independent record shop across the road from the HMV, where I spent about the same amount of time as part of my Saturday tour through the town centre, doing more browsing than buying. Record buying locally would also include WH Smith, Woolworth’s, the local department store Pearson’s in the early years, and for a while there was an Our Price too once the shopping centre had opened.
But HMV was there longest. It’s still in the same site on Church Street that it’s always been – I think it may have expanded from one unit and into two at some point because it used to be a lot narrower as many record shops were.
I can’t say I know or ever knew the staff in there. And I realise that this probably just comes across as a man in his forties wallowing in nostalgia in a very sub-Nick Hornby style.
It’s not even as though music has ever been the be-all and end-all of my life. I read Smash Hits and Number One magazines a little, and we watched Top of the Pops in my family, but not religiously. But I probably saw as much music on things like Noel Edmond’s Multi-Coloured Swap Shop as anywhere. I didn’t even listen to a great deal of Radio 1 at the time (I certainly wasn’t listening to Capital). Remember you’re talking about someone who didn’t even realise until well after he was quite famous, that the boy he sat next to in secondary school was in one of the most popular bands of the early nineties.
But back to the records. 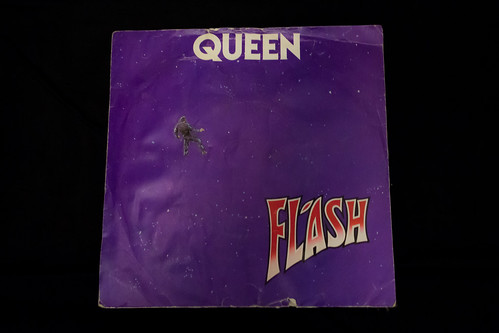 Sometime during the Christmas 1980 school holidays, we all trooped off to the local ABC to see Flash Gordon. Yes – that one, with Brian Blessed (although perhaps more excitingly for us, Peter Duncan from Blue Peter was in it). The Empire Strikes Back had came out in the year, and Superman II was coming soon – we’d see anything with a science fiction theme. None of us were particularly big Queen fans, but coming out of that I remember humming the music and wanting to get it. We’d been to an afternoon screening, and there was still enough time before the shops shut to get to HMV and buy a copy of the single. That record got played to death in our house. My friend next door got the whole album at some time around then, but I was still a singles man. And yes, I did, at some point, put some transfers on the cover. 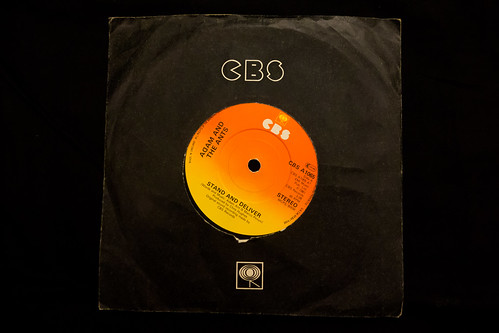 I do remember heading down to HMV on the Monday that Stand and Deliver came out. The previous Saturday, the video of the Adam and the Ants classic had been shown on Swap Shop (or possibly a Saturday evening show, but Late Late Breakfast had yet to start), and that was enough for me. It was amazing! In that first week, to help shift copies, the single came with a poster carefully folded around it. That obviously went up in my bedroom. He was called Adam after all!
And the following Sunday it had gone straight to number one. Don’t forget, this was 1981 and singles did not routinely debut at number one. This was very unusual.
Added to all this excitement, I remember dad telling me he’d met someone in a park who’d been in the video. He thought it’d been shot in Trent Park which was quite close by, but in fact it was shot at Hatfield House (not itself all that far off either). Either way, that didn’t worry me though.
An interesting aside, though – I now learn that Amanda Donohoe was in the video! I knew her from some of those late eighties Ken Russell films that are so hard to get hold of now, and of course LA Law, of which I was a big fan! But I digress.
I still find myself drawn into HMV whenever I’m passing it. I was in my local soon-to-closed branch just this weekend.
Of course it’s symptomatic of the way we “consume” music and video today, that a specialist high street retailer isn’t relevant to many people any more. Never mind iTunes, it seems as though we’re as happy renting music and video now. And it’s interesting that only this week, I read that Spotify is trying to negotiate cheaper and broader licencing deals with the record labels.
Maybe it’s generational. But owning rather than renting is how I like my music.
Note: I seem to have glossed over the fact that my second single was A Little in Love by Cliff Richard. I think I was desperate to buy something at the time, and I didn’t know what. So I came home with that. That’s my excuse, and I’m sticking to it.