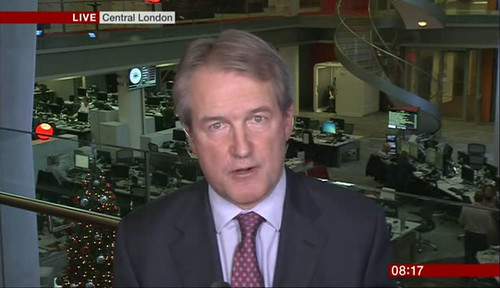 Since the BBC moved large parts of their new output – notably Five Live and BBC Breakfast – up to Salford, one inevitability is an increased number of “down the lines” from London.

It’s almost inevitable in the case of politicians, but other experts or guests, who cannot make it up to Salford the night before, have to be interviewed remotely from New Broadcasting House in London.

I’m not going to argue against the move. There are good reasons for it. But what I will argue is that the way these remote interviews back to London are carried out is pretty poor.

A case in point which makes most of the problems apparent was an interview with a surgeon in London discussing the awful injuries that motor racing driver Michael Schumacher has suffered while skiing with his family.

First of all, the interview, like most of these remotes, was conducted in an open environment. The interviewee seems to sit near a balcony with open access to the newsroom floor below. That’s a real working newsroom, and there’s a cacophony of sound that necessarily comes up from the floor. The problem is is that you can hear it over the microphone. It just comes over as a little disrespectful when the subject is quite serious, and the interviewee has to battle with the ambient noise.

Certainly show off the newsroom. But put some glass between the interviewee and the actual working environment.

The other problem is that to show off the newsroom to viewers, which is a floor below the interviewee, the camera is positioned very high, and contributors are expected to look up into it. This makes for an odd viewing experience. It’s as though a toddler is being interviewed. Look again at the picture above.

Can’t a level angle be used, ideally from somewhere actually on the ground floor, but maybe raised a couple of feet? I’m thinking like the old Grandstand set. Or indeed any US news channel throwing to New York/Washington/LA bureau. They could even dress the set a little to be in keeping with BBC Breakfast.

A small thing, but it’d go a long way to improving the look.

Incidentally, getting back to the title of this post, there was a lovely tribute to Felix Dexter on Radio 4 over Christmas done in the style of “Down the Line” the superb radio phone-in comedy he was part of. At time of writing, there are 13 hours left to catch this. Thoroughly recommended.