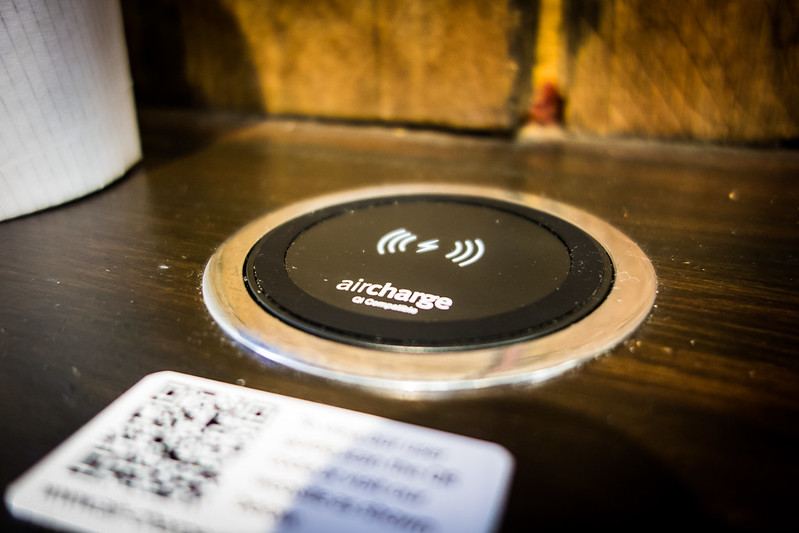 A few days ago I needed to “juice” my phone, and actually chose to sit in the Sacred Café part of Stanfords in Covent Garden because it had a healthy selection of power sockets under the counter. But as I sat down with my tea, and was about to root around for a charger that I sometimes remember to carry with me, I noticed that they had these Aircharge panels built into the counter!

Some years back, with great fanfare, there was a big promise from the phone industry that everyone would be using standard charging solutions in the future. Gone would be the days of group emails in workplaces asking to borrow, “a Nokia charger – the new type” or whatever. Even Apple joined the agreement.

Well we know what happened next. Pretty much every phone company in the world, with the notable exception of Apple, switched to micro-USB. Indeed many other portable electrical and electronic devices have also shifted to it. So one charger can sort out everything from bike lights to GPS devices to cameras to, of course, phones.

Unless you have an Apple device. They dutifully changed their charging cable (breaking thousands of iPhone specific accessories in the process) and switched to their own Lightning connector. So they switched from one proprietary solution to another.

I suspect that the Lightning connector is probably “better” in many respects than micro-USB. The reversible nature of it is a basic starting point – as there’s no doubt that micro-USB is fiddly if you’re not paying close attention.

I am still curious to see how Apple manages the EU’s stance on common chargers though. At the end of last year, the EU was continuing to proclaim it to be happening soon.

Which brings us back to wireless charging, because there are developing standards in that world – notably Qi from the Wireless Power Consortium. Google has adopted it as standard in its recent Nexus products, and all the main mobile phone manufacturers – with the exception, again, of Apple – are members. So for example, while Qi isn’t built into the new Samsung Galaxy S5, you can buy an official case that adds it in.

Since it removes the need for wired chargers, wireless charging could remove the need for any intervention from the EU. Personally I’d love to see many more places put these kinds of charging pads into the wild.