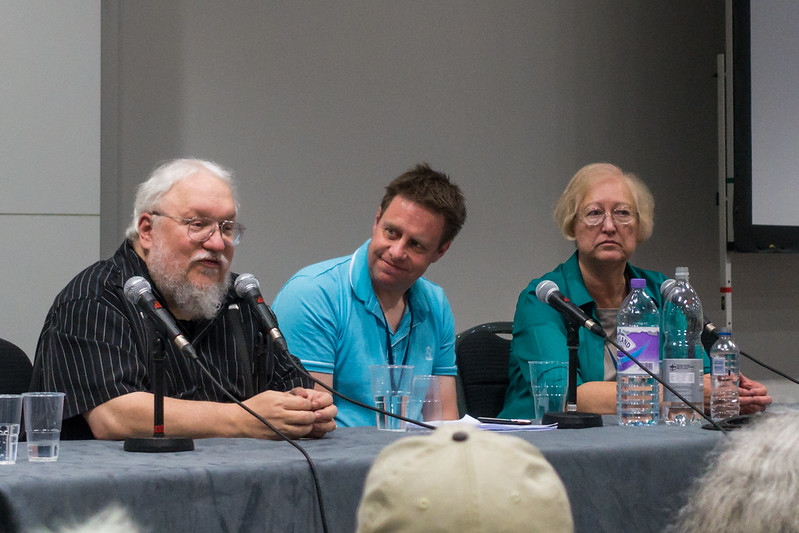 Each year the World Science Fiction Society holds Worldcon – an annual convention – in different parts of the world. It’s a movable feast, although more often than not, it’ll be held in a US city.

In the past, the UK has had a decent crack of the whip, with a couple of outings to Glasgow and Brighton. But the last time it came to London was 1965. It was probably time for a return.

And I duly signed up for its return this year.

Like most things, I don’t read enough SF (and even less Fantasy), but I enjoy the genre and pay attention to it. And I don’t go to conventions. I once went to a Babylon 5 related gathering years ago in Birmingham but that really is it. And I don’t know anybody who goes to conventions either. It’s not a “thing”. I just haven’t been.

LonCon 3 – as this edition of Worldcon is known – was held in the massive aircraft hanger than is ExCel in London’s Docklands. I don’t believe anything has ever filled ExCel. During the Olympics, when several sports were held there, there were additional unused halls. And even something like the Boat Show, which sees gargantuan luxury yachts inside on stands, still has plenty of space over. The last time I went to that show, I was attending a different show altogether than happened to be on at the same time. That’s how much space there is there. But that’s all by the by.

What did I take away from LonCon?

So there we have it. A very worthwhile event, and actually pretty reasonably priced for an event that lasts five days, even though I was back at work for day five.

Will I be going to Sasquan next summer in Spokane? Probably not – unless I decide a Twin Peaks tour is in order. But other conventions, even if they’re at awkward places like Heathrow or awkward times like Easter, are definitely on the cards. I quite fancy going to a crime one too.

Now I better go and read Ancillary Justice. I bought it months ago, but haven’t read it yet…

Previous Story:
Do Not Sit On The Letters
Next Story:
These Words Are Mostly Meaningless and Wholly Untrue

2 Replies to “LonCon 3 – Thoughts on Worldcon”