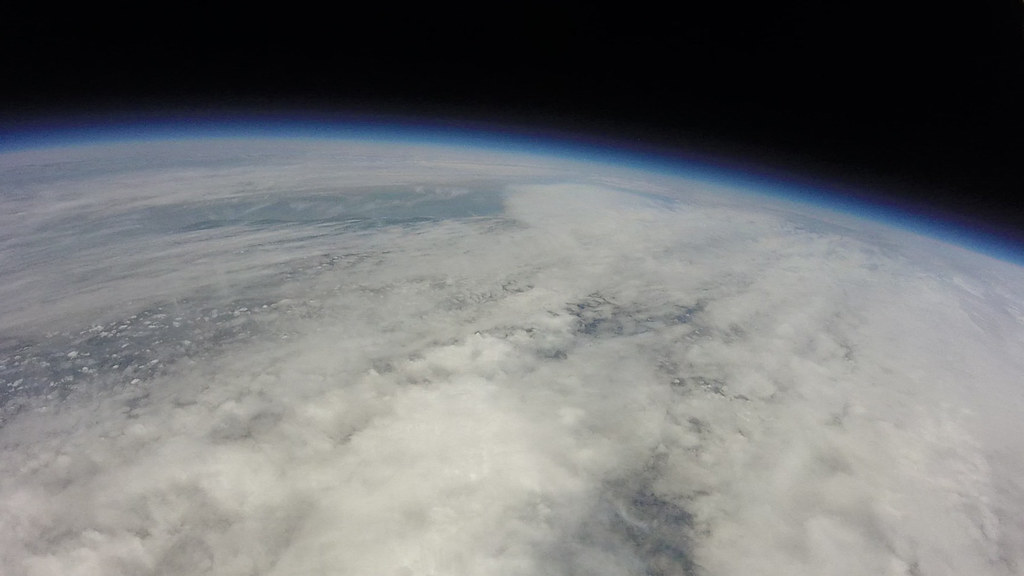 Those with longer memories may recall that I once tried to send a camera up on a bunch of helium balloons from a rooftop near work. We had, er, “mixed” results when a knot I tied turned out to be particularly poor.

But the ultimate must surely be those high altitude balloons that you sometimes see being launched with cameras attached to weather balloons, high above the clouds, getting into near space.

Today we achieved our aim!

High Altitude Balloon 24 May 2015 from Adam Bowie on Vimeo.

In particular, look for the balloon bursting at about 8:55 into the video!

Earlier this year, I gathered together a few friends to put together a plan to launch a balloon into “space” (OK – it’s the high atmosphere, and not really space. We were aiming for about 30,000 metres or close to 100,000 feet. To put that in perspective, the Felix Baumgartner’s “Space Jump” was from 129,000 feat or 39,000 metres – about 25% further than we went). All sorts of people seemed to be doing this all the time. And if a group of school kids could do it, so could we.

Part of the plan was simple. Weather balloons can be bought online, and helium is readily available, even if it’s not cheap. Other components you can find online. But the key thing is to track your balloon. My first thought was the cheap and cheerful. You can buy kits online that come with a couple of GSM/GPS trackers. These are cheap devices which you pop SIM cards into and they are able to text GPS coordinates to a phone. The problem with these is that the GSM network is targeted at people on the ground. Once you get just a few thousand feet up, they go out of range.

That means that you lose track of where your balloon is until it has fallen low enough to pull in a GSM signal again. A big part of the flight is unknown. Even if you put something take measurements, you have to recover the balloon first.

Another option is using satellite trackers. These can be bought or hired, and they can ping off the Iridium satellite network. But it’s still incomplete, and there are costs with getting a subscription with one of these services. They need to face upright too to get a good signal.

The best route, although the most complex, is to use a radio tracker. This operates at a fairly low powered rate, and has a GPS built in. It then broadcasts the signal to anyone listening, and by including a codename, you can track a particular balloon – or payload below a balloon – to see where it’s going.

The really good thing about this solution is that it’s not necessarily down to you to track the balloon, since there’s a network of stations – especially in the UK – that will listen out for your signals and upload them to an online tracker. What this means is that you can track your balloon live online!

Allied to this is prediction software that can work out your balloon’s route, and you have an excellent solution.

It this sounds complicated, then it’s true to say that there’s a learning curve. Everything you need to see is either on the UK High Altitude Society Wiki, and habhub.org where you can find links to the trackers.

Thanks to the very kind Steve or Random Engineering, we got the loan of one of his trackers – since our soldering capabilities were minimal so we didn’t want to build one ourselves. Steve also looks after a launch location in Cambridgeshire where he has CAA clearance to launch balloons. You need to get this before you can send your balloon upwards.

There’s still a certain amount of assembling, and fortunately, there are lots of good guides online explaining how to put things together.

Then it’s a question of getting the weather right. Our first weekend was a wash-out. The balloon would have careered off into the North Sea. The second weekend was better. Although there was the small matter of keeping clear from Stansted Airport and RAF Duxford which was having an air show.

And so it was that we found ourselves in a field in Cambridgeshire at 9am on Sunday morning, ready to go. Well not ready really. Our payload would contain a budget GoPro (the £100 model), an iPhone 5s and a Canon camera running CHDK for stills. But I’d somehow managed to flatten the Canon’s battery despite recharging it. So we replaced it with another iPhone we had spare. We also had a couple of USB chargers for one of the phones and the GoPro. Also inside was a GSM tracker as mentioned with a PAYG SIM. A couple of Lego spacemen went in, and an FM radio on constant search to feed into the video of the iPhone.

We sealed the payload, attached our loaned tracker, then a parachute, and finally our balloon. Because of the weather conditions we made sure we had a fast lift – 6 m/s. This would ensure we’d come down before Stansted.

And then it was off! The GSM tracker worked for a while, but we were quickly able to also see the balloon live online. 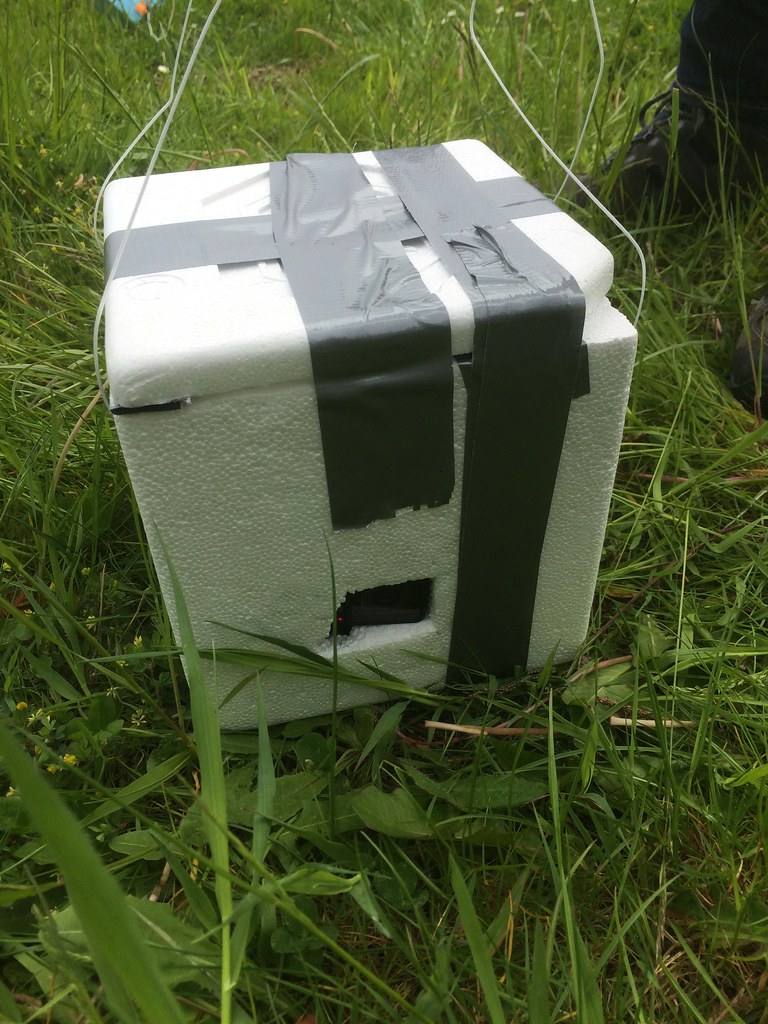 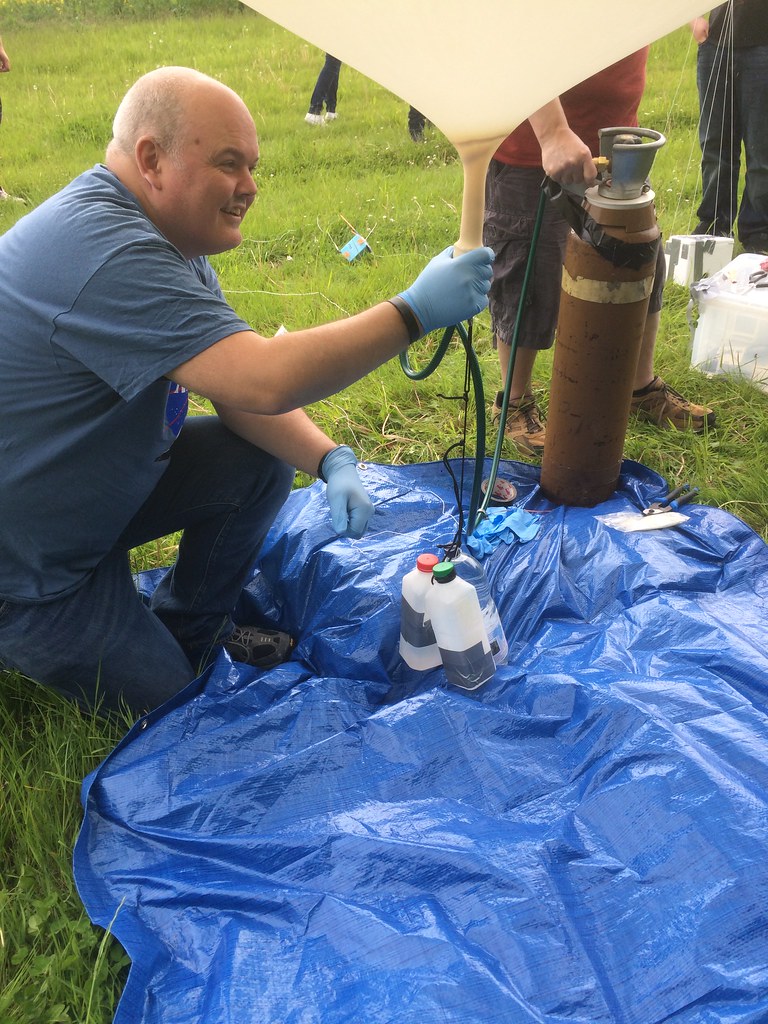 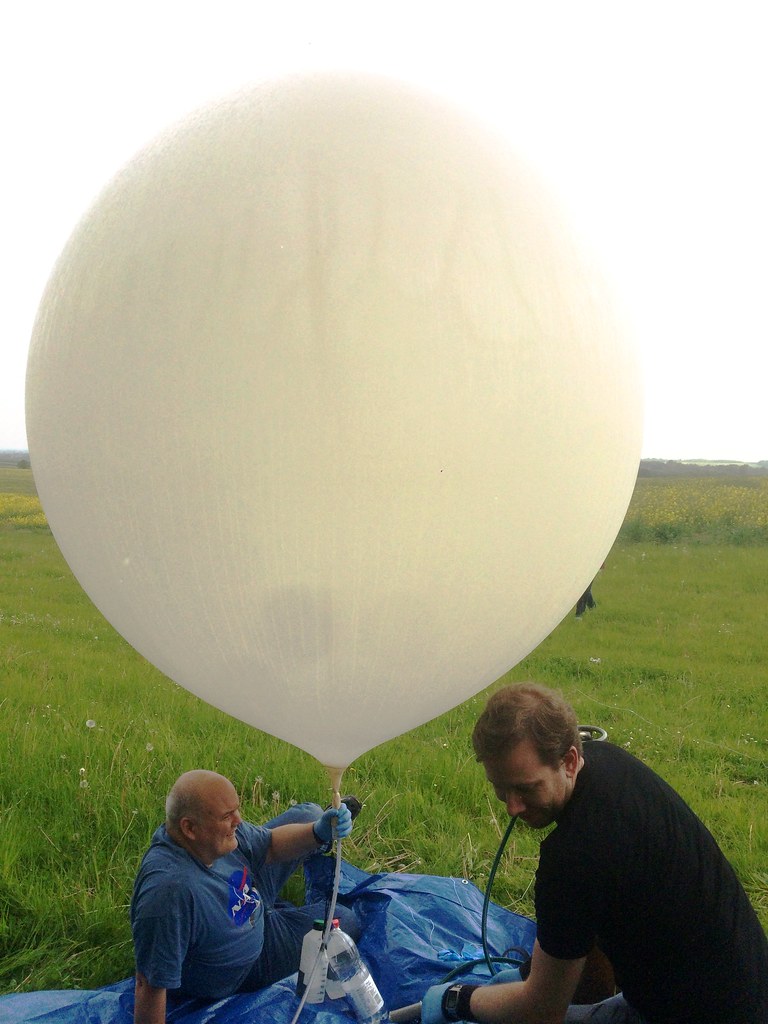 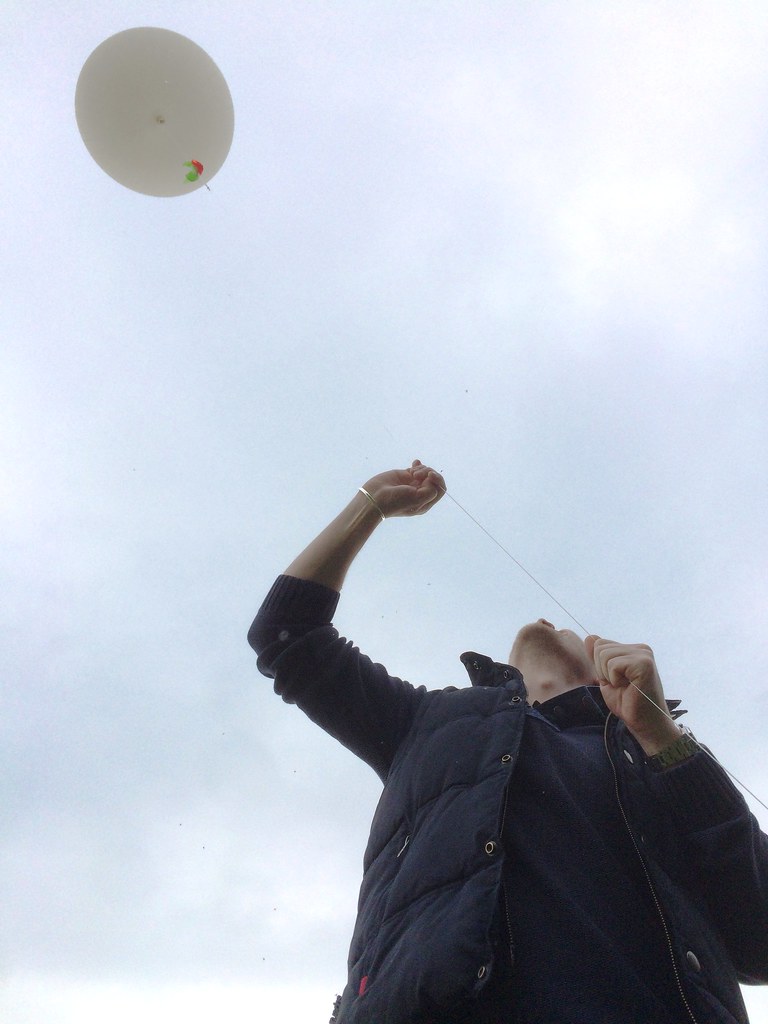 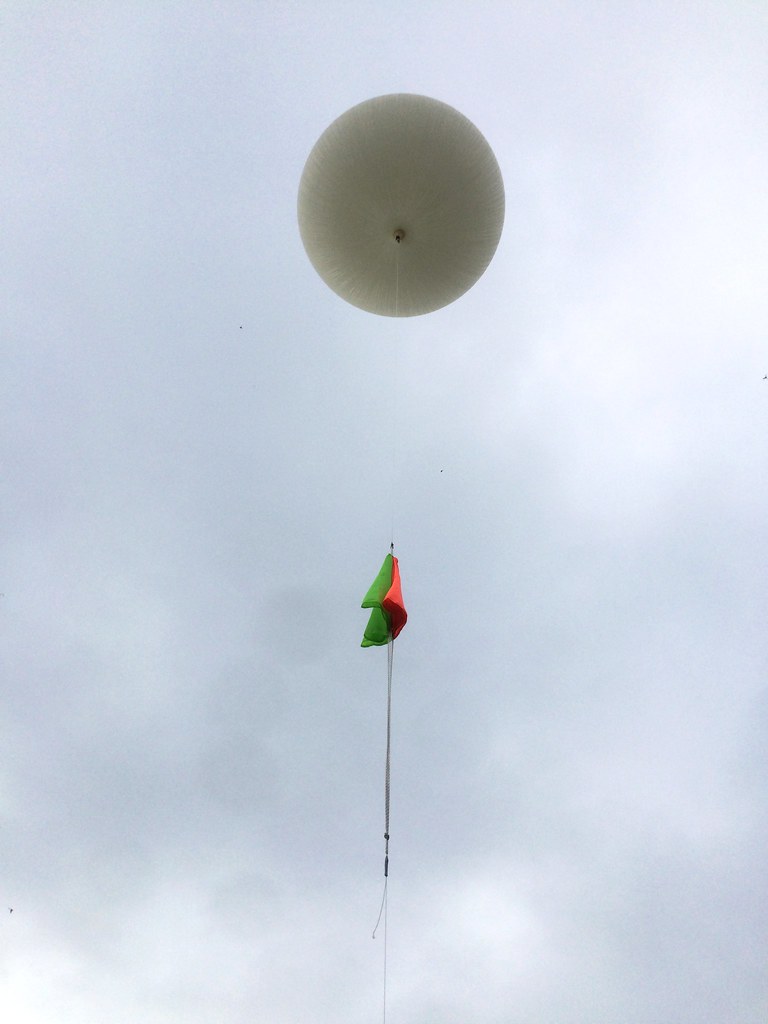 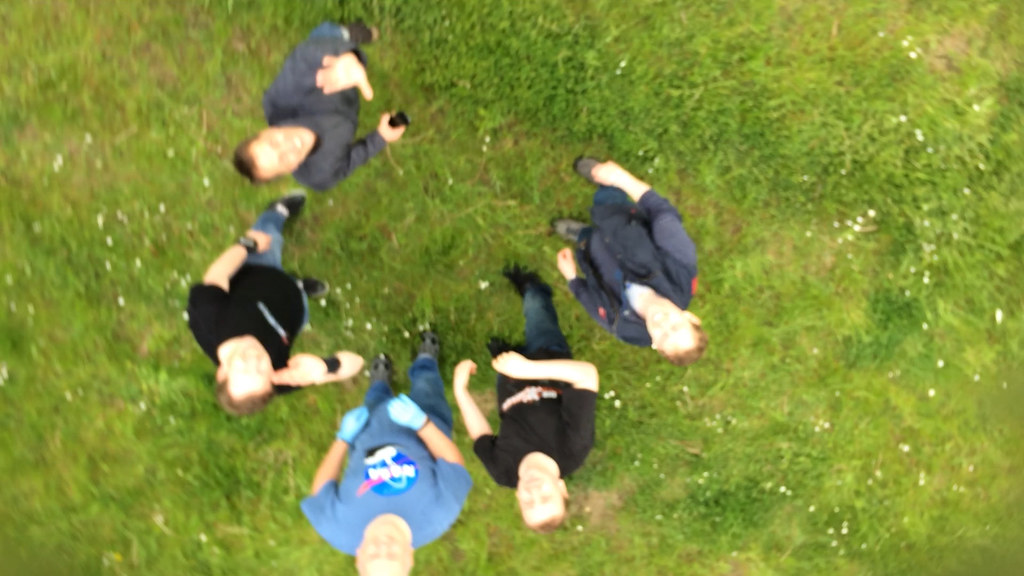 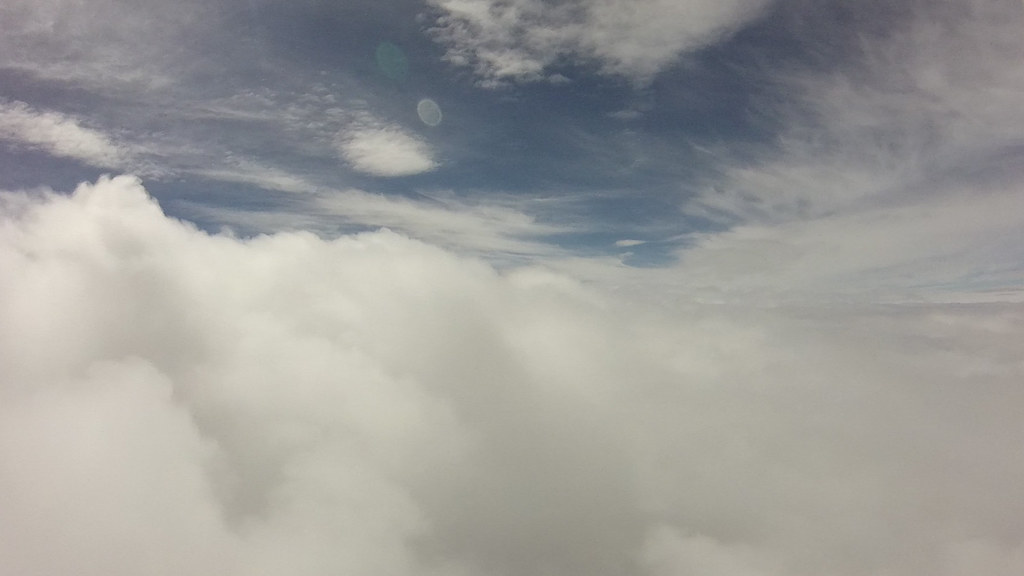 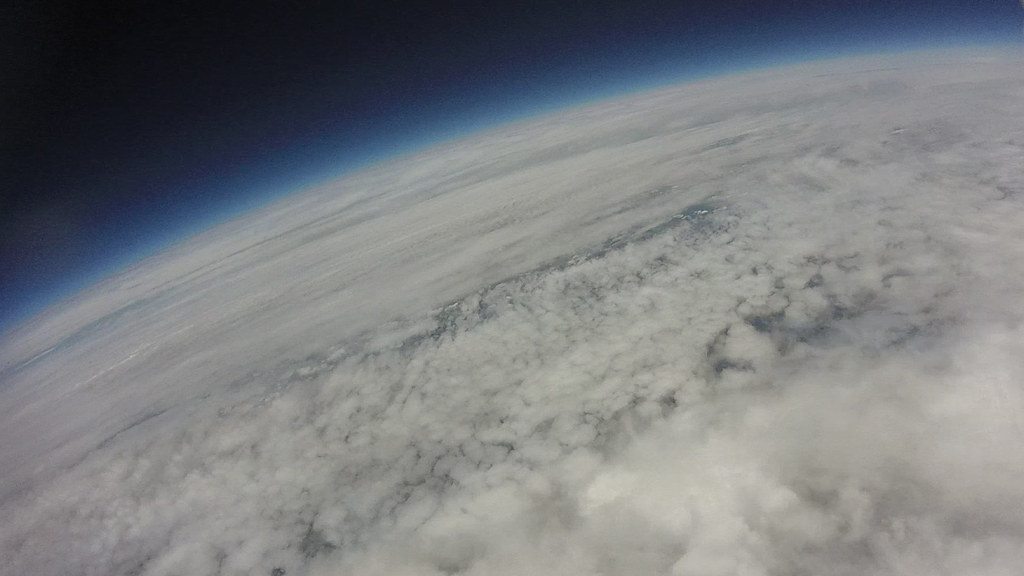 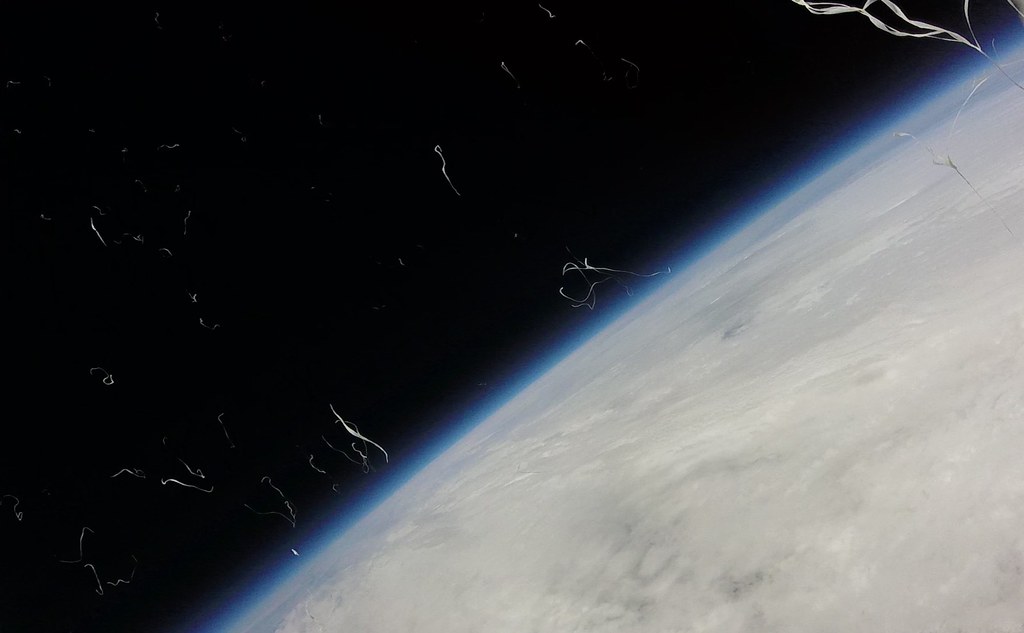 Then it was off in our cars to chase the balloon, heading towards Saffron Walden as a broad landing area. In fact, it turned out to be a very accurate landing area. And as the balloon got lower the cheap GSM tracker kicked back into life too.

Finally we knew we were down, and in a field. The good news is that we were away from trees. The bad news was that we’d just missed some electricity pylons by just a few metres.

We’d also only just missed the M11 and were close to a railway line too! We are uX2 in the route below. 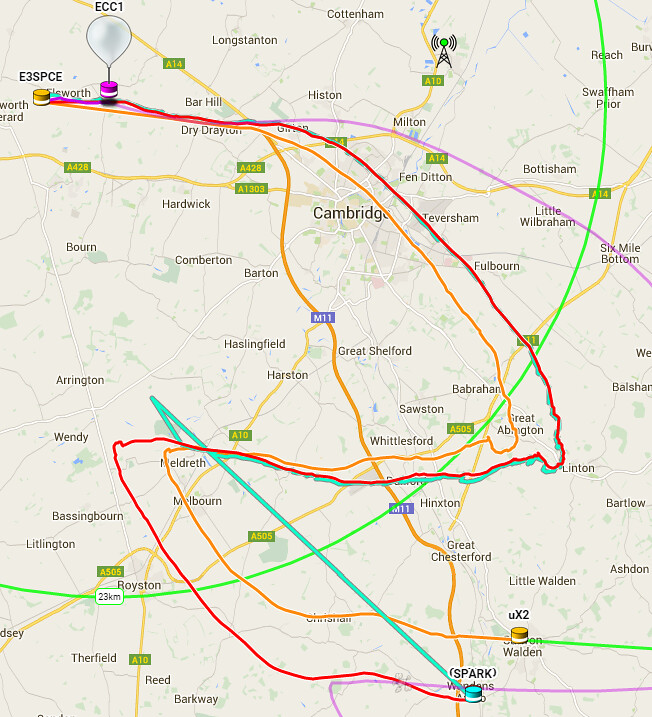 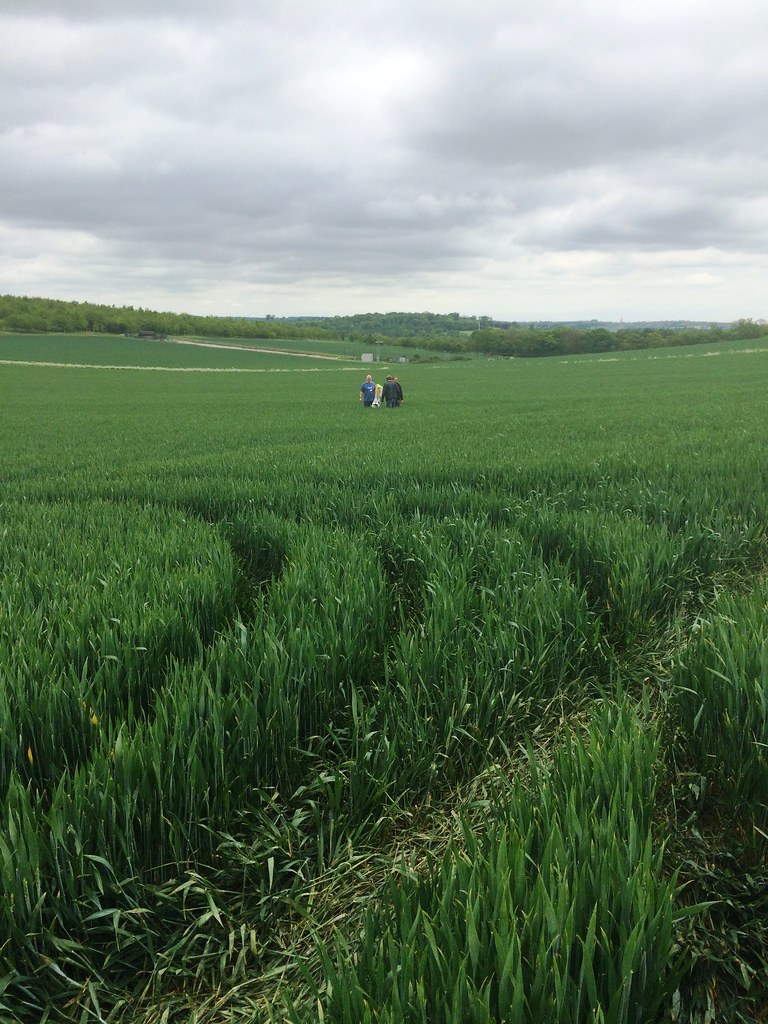 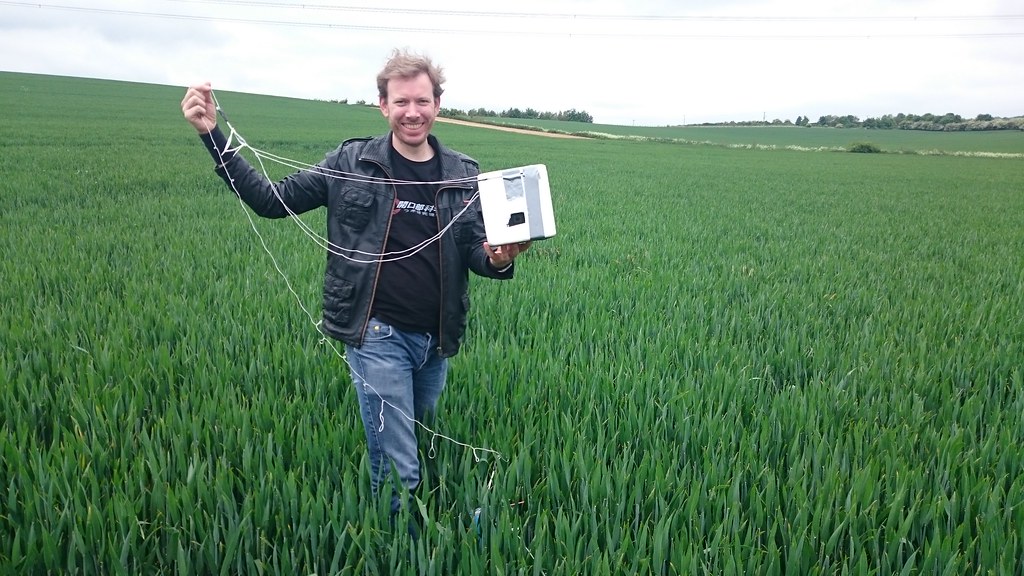 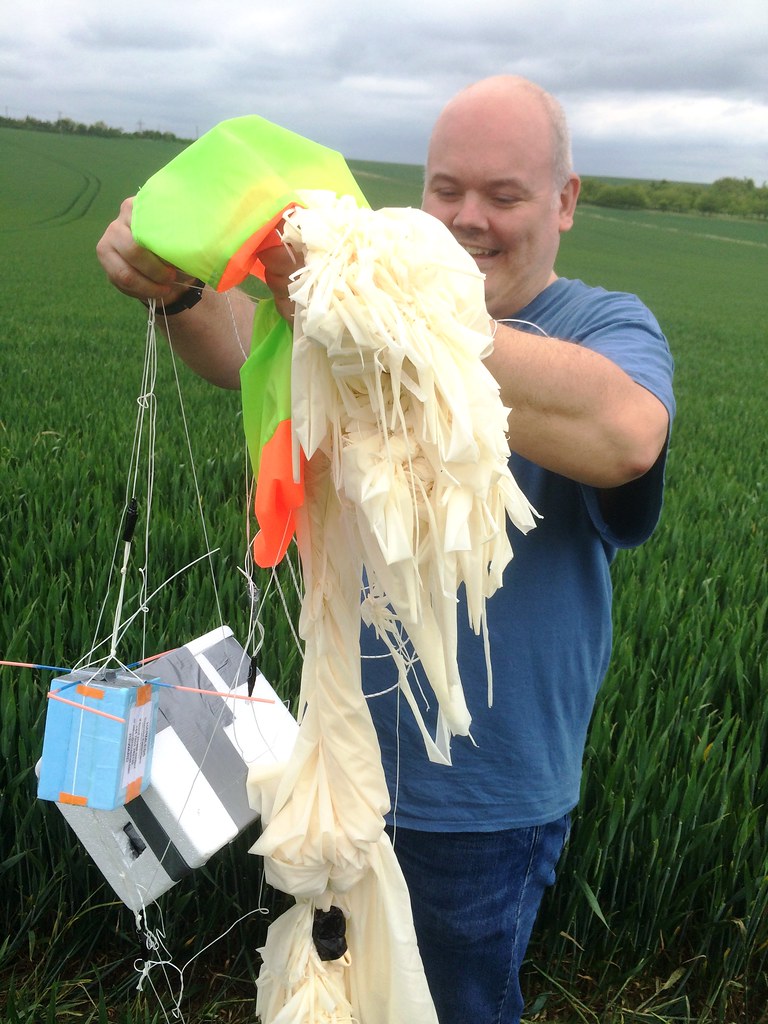 We recovered everything and headed to a nearby pub to look at the footage. Amusingly Steve tracked us down to the pub because we hadn’t turned the tracker off!

Anyway, it was all a massive success, and you can see from the video and stills.

Update: Here’s a second video made by Michael Hill featuring more detail of the balloon and payload, and some additional shots and explanation.