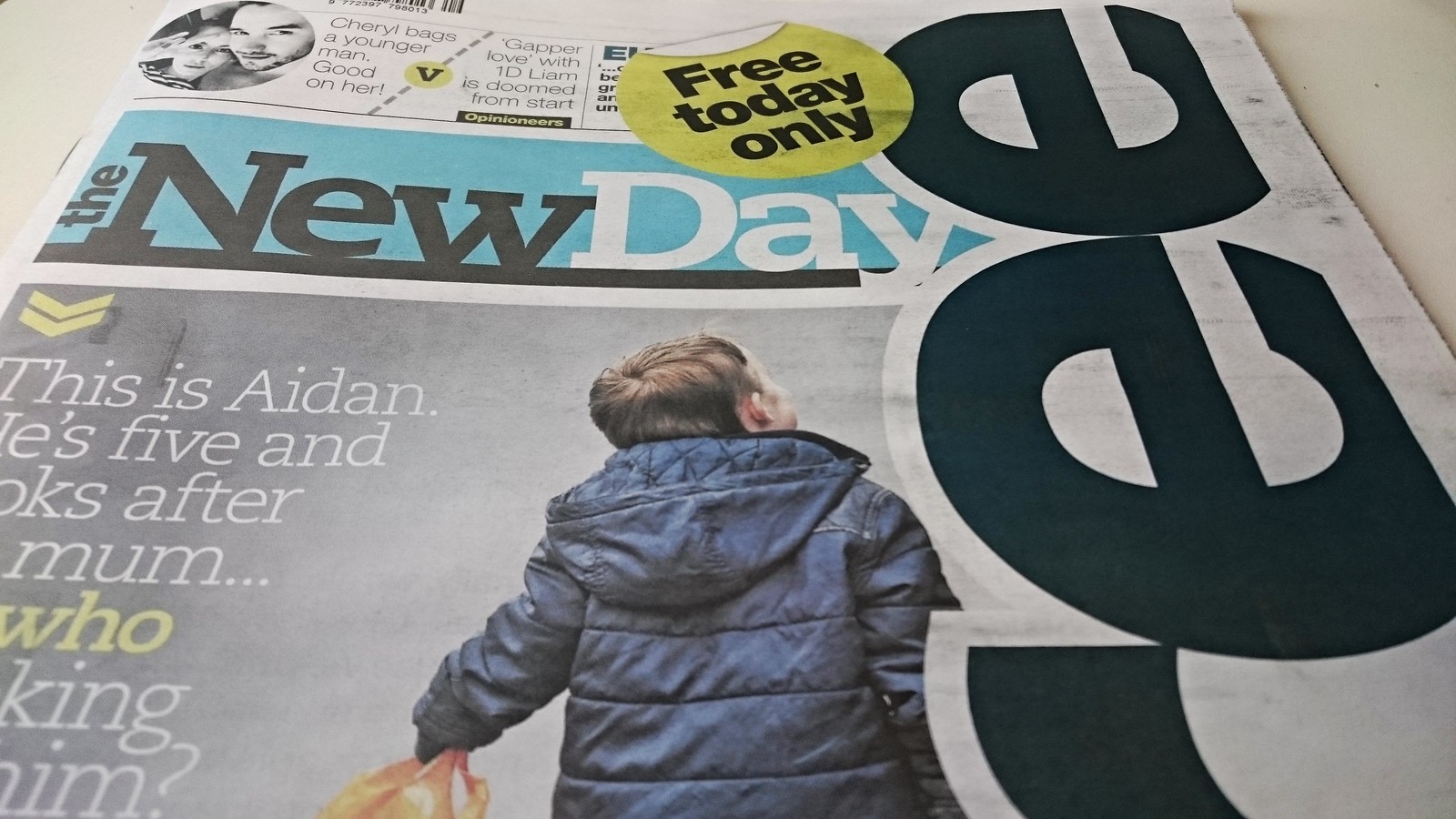 The New Day really is a different offering to the rest of the national news offering. It’s Trinity Mirror’s new national daily – and yet still feels a bit like a spoiler targeting the now Johnston Press owned “i” as the previous owner – the Lebadevs – take The Independent online only whilst selling off the “i”.

It had been widely rumoured that Trinity Mirror was itself interested in taking over the “i” but that Johnston Press beat them to it.

Media Guardian reports that Trinity Mirror’s chief executive, “…denied that the sale of i to Johnston Press, one of Trinity Mirror’s major regional press rivals, played any part in the decision to launch The New Day.”

Then there was The Times’ price war against The Independent – dealing it a massive blow in terms of potential profitability from which it never could recover. The Times lost money for a while, but the long term damage was done.

And more recently there was 2006’s attempt by News International to break into the London marketplace with thelondonpaper. The Standard responded with London Lite – an alternative free paper. The Standard battled through as a paid-for title until it had seen off thelondonpaper. Then London Lite shut down, and once again the Standard was on its own. In due course it was sold to the Lebedevs, became free itself, and is now profitable.

From the outset, The New Day sounded like a classic spoiler tactic.

There were plenty of free copies of issue #1 in my local newsagent this morning, but they’re free only for today. The title’s full price will be 50p which you must set against 65p for the Daily Mail. 15p buys you a lot more paper, although admittedly its politics might not be aligned to yours.

The paper comes with a big wraparound that tries to explain what The New Day is and isn’t. Their biggest play seems to be the quality of the physical paper – which is a step up from most newspapers. It’s printed on paper stock similar to some of those advertising sections that occasionally drop out of your weekend papers. But it’s as well that it is on thicker paper since at 40 pages, it’d be pretty thin otherwise.

They claim no political bias, and that they will carry opinion but not columnists. They claim that they’re rethinking the newspaper – not having men’s and women’s sections.

[Editor, Alison] Phillips told Radio 4’s Today programme: “The New Day will tell you everything you need to know on any given day. It will be pitched at people aged 35 to 55, people who want a more modern approach to news.

“It will be a ruthless edit of the day, with balanced analysis, opinion and comment, but no political line.” It will not have a leader column.

It will not be a red-top, she said, but would not be aimed at the audience currently served by the i newspaper.

So this sounds like “i” with a splash of Metro. Except Metro is free. Sure, it’s only available in major towns and cities, and relies heavily on commuters. Lots of people pick up Metro because it’s free – few probably would claim that it’s the best paper. But it does the job.

So the question must be how many people will pick this up and pay for it ahead of a free paper or a more editorially driven paper. And it’s not as 35-55 year old people don’t have smartphones and tablets.

So how does this all translate in issue #1?

The cover is a story about the plight of infant carers. It’s on page 4, but nowhere on the front page does it tell you to turn to page 4 to read it.

Pages 2 and 3 are full of one to three sentence stories dealing with the news of the day in a light style. A bit more than you’d get from Twitter or Facebook if you don’t click through – but not much more.

The letter from the editor mentions that they’re aiming at a glass half-full kind of person. Have we seen their TV ad? I saw it once and I couldn’t work out if they’d made it specially or just edited something together from stock footage – so stunningly underwhelming as it was.

After their child carers story on pages 4 and 5 we come to a page which will be their letters/reader opinion page. And then it’s Today’s Big Question which seems to feature two, er, columnists writing about the snooper’s charter (Yasmin Alibhai-Brown and Julia Hartley-Brewer). I’m sure they’re not regulars. They’re carrying opinion and not columnists remember.

A couple more tabloidy/Metro-ish pages, and there’s a two page spread including a piece on the EU referendum from David Cameron and an adjoining one from a woman described as art teacher, and mum of two, from London.

More opinion on the big talking point of who Cheryl Fernandez-Versini is seeing (!) and we suddenly reach the Sport Essentials page – still in the front half of the paper. It’s all short stories with no actual match reports, or indeed just a box giving the scores. But we do get an Instagram picture from Cristiano Ronaldo with his son.

The centre spread is called The Bigger Picture and is basically a big double page photo – today of the UK as shot by Tim Peake from the International Space Station. The photo is actually a month old now, with most papers carrying it at the time it was taken.

Two pages on bullying, a “3 Minute Update” on Politics, the World and Money (on one page), and then a Russell Kane column (Surely a one-off, because this paper doesn’t have columnists?!).

Then it’s back to sport with Robbie Fowler writing about the Liverpool (not the League Cup final per se) and Ugo Monye writing about England v Ireland from Saturday. Yes – it seems odd that these are divorced from the other sports pages, and no, they’re not match reports.

We get the inevitable astrology, alongside a piece about women proposing to men (it’s Feb 29 today) and a piece from someone from Gogglebox – again, not a column I’m sure. Then we get a curious 11 Days in the Life Of… This is the first in seemingly a series of 11 pieces leading up to an event – in this instance a wedding. 11 seems a random number and means that new series of these will start on different days of the week.

Then we get lost in a mish-mash of pieces that aren’t really specific to a day. The TV guide seems to be solely a list of four recommendations for tonight, before we reach the inside back cover which has “The Big Read” on the conditions of albino children in Tanzania. The back page has the weather, a few puzzles, a couple of lines from Thomas Hardy and a photo.

So what do we take from all this. Well it might not have been spelt out in the run-up to launch, but this is clearly a female-targeted publication.

There’s little to no actual news – more features. One of the big things surrounding this launch was that there wouldn’t be a website for the paper. You can see why – they’re not really chasing news. Their Facebook and Twitter feeds are hard to discern at the moment since they’re mostly talking about their own launch right now.

While I appreciate that this paper is not for me and never will be, I’m not at all sure who it’s actually for. Why would you spend 50p on this? It’s certainly no better than Metro, and substantially worse than London’s Evening Standard (not itself a good paper). The “i” has more actual news and costs 10p less. And if you can leave aside the politics, you certainly get value for money from the Mail at 15p more.

I don’t understand some of their editorial decisions.

They break up sport into two different sections – neither of which deals with it properly. And all the sport was male. Why not report, for example, Lizzie Armistead winning her first race as World Champion in Belgium at the weekend? She’ll be a strong gold medal contender in Rio. Or Adelle Tracey’s performance in Sheffield?

While I’d never wish ill on a new project I just don’t see what the point of this is. The target market is digitally enabled, and there is simply no shortage of what they’re offering online, and in better quality (e.g. The Pool).

The title is terrible too. It makes it sound like a weird new right wing political party.

The paper has nothing going for it, and aside from Trinity Mirror trying to cause some damage to Johnston Press, I just can’t see this project lasting.

[Update a week later: It’s now reported that initial pricing plans have been changed. It was at first due to have a one day free trial, followed by two weeks at 25p before finally reaching 50p on a permanent basis. But it looks now as if it’ll be staying at 25p for “a few weeks.” With sales reported to have fallen to 110,000 by Tuesday this week from about 150,000 at launch. Whether it can steady the ship at around that level and become profitable is another question altogether. I have very strong doubts about it.]

[Update 17 March: The Guardian reports the paper’s price finally reaching the planned-for 50p a day, yet the sales are now around 90,000. I’ve not picked up a copy since the launch edition, but that’s quite a bold move. I reiterate that either the “i” or Daily Mail surely offer a better read for anyone to whom this paper is targeted.]
Previous Story:
The Flying Scotsman
Next Story:
February Books

One Reply to “The New Day”