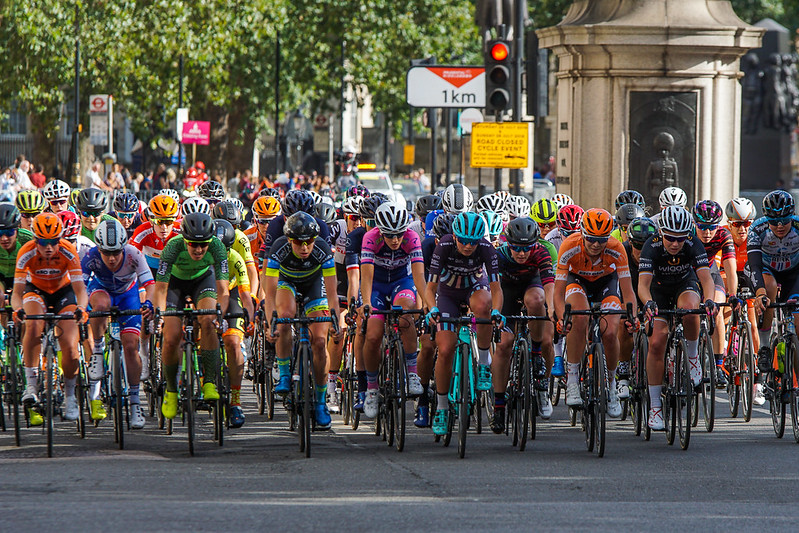 This last weekend saw a massive collision of all things cycling. It was the final weekend of the Tour de France – fabulously won by Geraint Thomas. That had been pushed back a week to stay clear of the World Cup. Meanwhile it was also the Saturday night of the Dunwich Dynamo, from London Fields to Dunwich on the Suffolk coast. That always takes place around the July full moon. And then it was also RideLondon, with the FreeCycle on London’s closed roads on Saturday, followed by a series of races on a circuit around St James’ Park and Whitehall. RideLondon collided with the Tour de France this year, which was good in some ways – a likeable Brit/Welshman winning the Tour and getting front pages – but it meant that there was no avoiding the men’s RideLondon Classic finishing on the Mall at almost the exact moment that the Tour de France was finishing on the Champs Elysee.

The final stage in Paris has ended up becoming an early evening affair in recent years, in large part because Tour organisers like to finish the race in the mountains, either the Alps, or this year, the Pyrenees. Both mountain ranges are a long way from Paris, and even though the riders get a plane transfer, much of the rest of the Tour’s infrastructure has to drive hundreds of kilometres across France. So a late start is essential.

Meanwhile in London, the professional race is run on many of the same roads as the amateur sportive earlier in the day. So the race takes place after the roads have been cleared of slower finishing riders.

This did mean the bizarre circumstances of men’s professional cycling being on both ITV (which had moved up coverage from ITV4 for this final stage of great interest nationally) and BBC One simultaneously. Indeed, the BBC had to make do without David Millar taking his usual place on the back of a motorcycle for their coverage (Yanto Barker ably filled in), while Chris Boardman was also in Paris and not alongside Jill Douglas. More complicated was the fact that the BBC’s coverage had to acknowledge Geraint Thomas’ win, while at the same time not pushing viewers to head over to ITV!

On the other hand, we did get a few sprinters in London who’d been forced to leave the tour when they didn’t make the time cut. Mark Cavendish and Andre Greipal were in London even if neither ended up on the podium.

But enough about Sunday – which was wet and windy, and I watched from the sofa rather than the streets. What about Saturday?

I headed over to the race just ahead of its start, and as usual there was good organisation out on the roads. The final FreeCycle riders were being cleared off the route, and the women’s teams were exploring the course of the circuit. It was a slight variant on previous courses with a start/finish on The Mall, heading up and down Constitution Hill, doing a 180 degree turn just ahead of Hyde Park Corner. Then it took a loop around St James’ Park before looping up and down Whitehall, back around Trafalgar Square and into The Mall.

It is a shame that the women only get to do what is essentially a glamorous criterium circuit. But for spectators, there are lots of chances to see the riders.

One thing those spectators need to spend some time working out, is how to navigate around the course, since there are limited crossing points and it’s not always obvious. Get a map in advance is my recommendation.

Saturday was a bright but very windy day. Dust clouds blew up from time to time, and although it was still the end of July, the wind had detached many leaves from their trees following 8 weeks of hot weather, and it had the look of autumn. The wind meant that at one point a Brompton branded gazebo blew over, while race organisers had left on the ground the signs indicating the last few hundred metres distance before the finish. It was too windy to keep them standing up.

Unfortunately, that wind also had an effect on the race which stayed together from start to finish. And there’s nothing worse that a criterium where no groups or people get away. There are a number of sprint competitions that were well contested along the way, but nobody ever got off the front, and that doesn’t make for a great race. The most exciting thing that I saw happen was a crash on a corner, which held up a number of Canyon SRAM riders including Alice Barnes. She drafted the neutral service car enough to make it back on, although others didn’t.

The final spring itself was a good one, with riders across the road. Marianne Vos’ Waow Deals team, marshalled by Dani Rowe were in a good position, Sunweb were trying to repeat last year’s win for Coryn Rivera, and Alice Barnes did manage to fight her way back into the mix. But in the end it was Wiggle High 5’s Kirsten Wild who won the race. That came in the week that team owner Rochelle Gilmore announced the end of the team (Although I’m slightly confused both by the way this was announced and what it actually means, since she slightly backtracked in the BBC’s coverage suggesting that although she wouldn’t be part of it, something else might emerge. We’ll have to wait and see).

I’m not too sure what needs to be done to make the race a better competition. Perhaps some kind of financial reward for the most aggressive rider or team? There’s a lot of cash in this race, which means they do get the entrants. But there wasn’t much of a break last year either as I recall. I wouldn’t underplay the effect of the wind on the weekend’s race, but it was a shame it wasn’t a better race.

I took plenty of photos, some of which are here, and the rest can be seen over at Flickr. 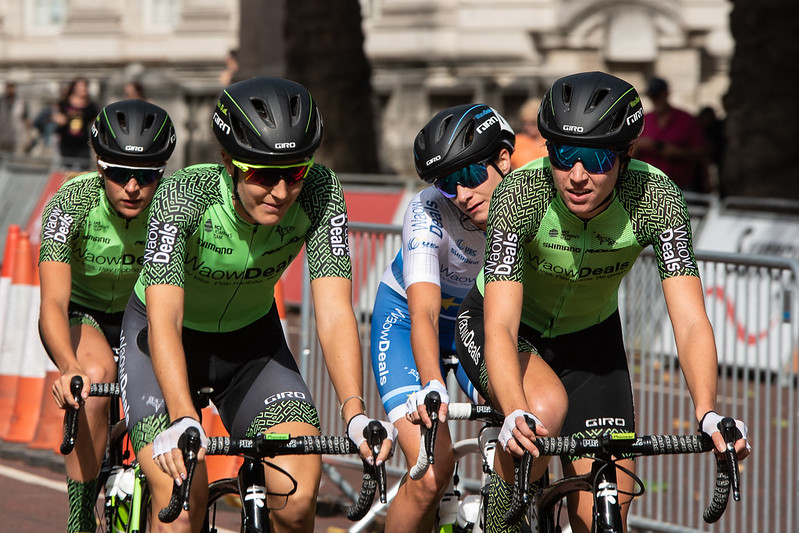 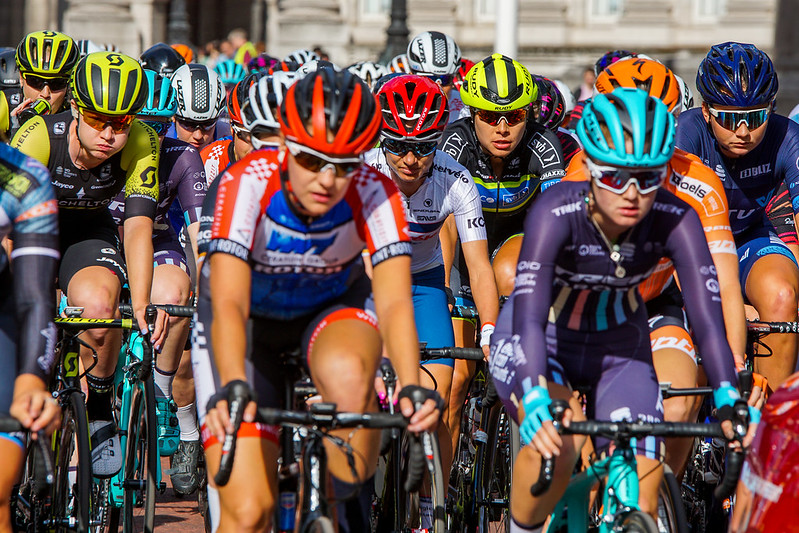 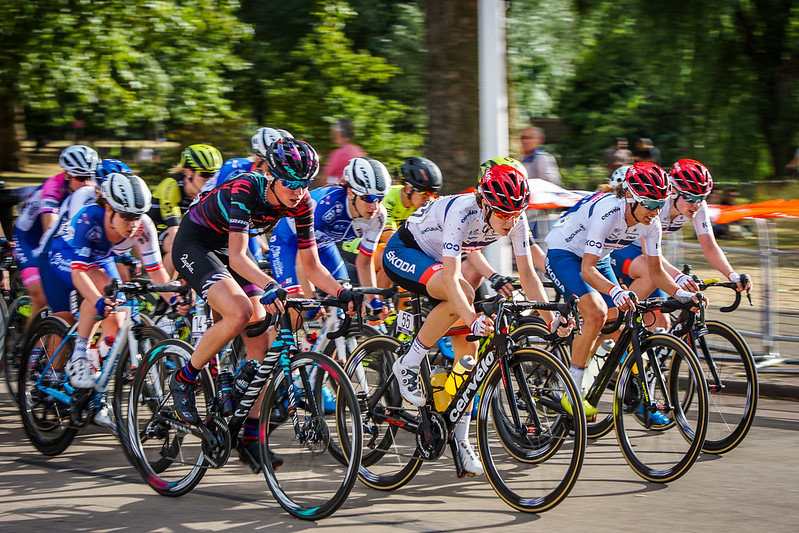 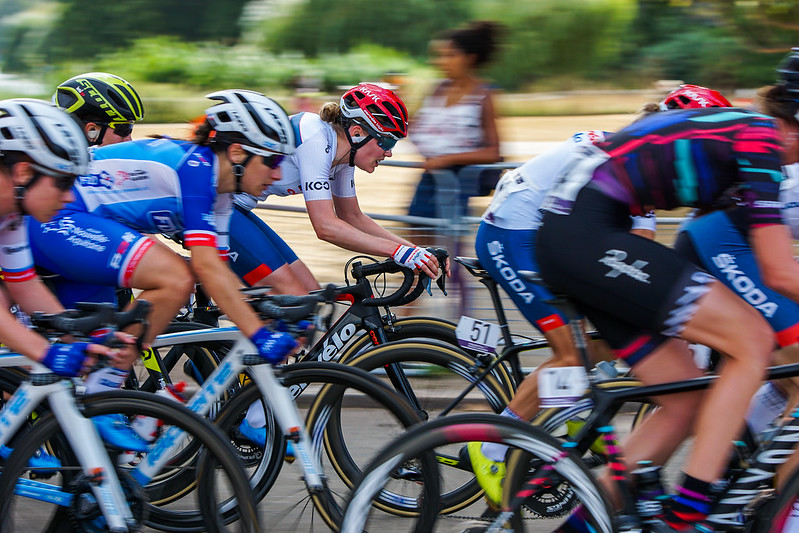 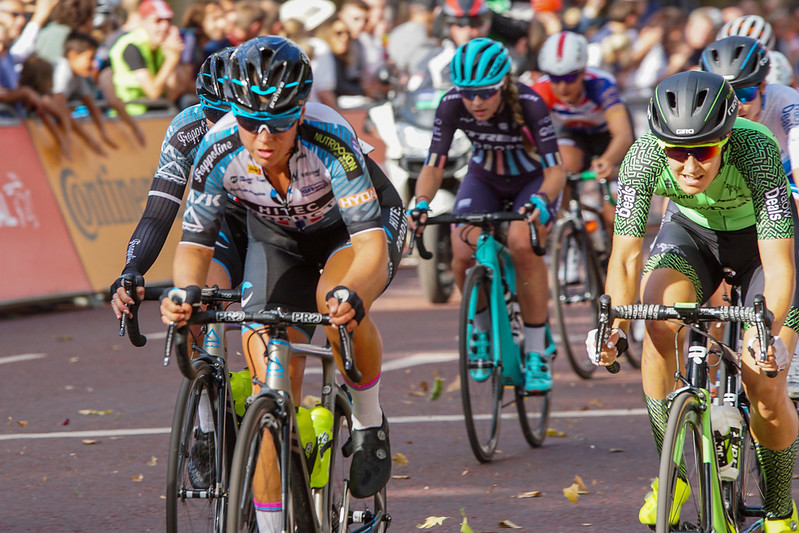 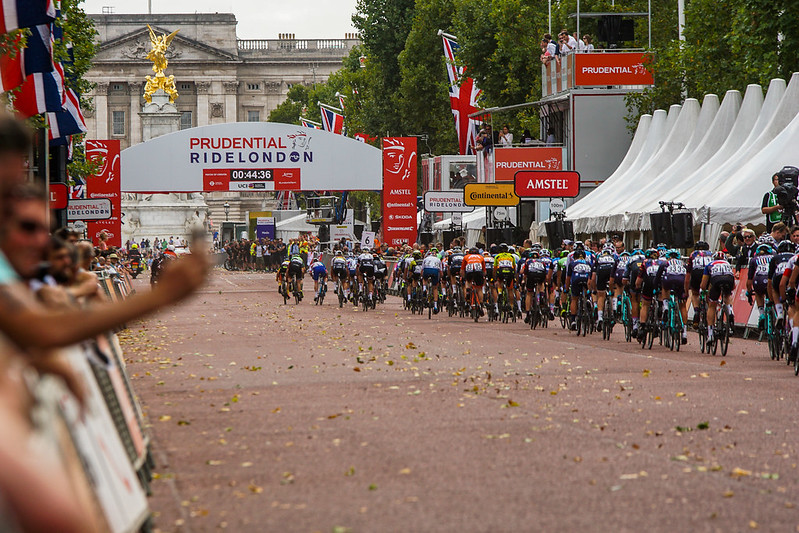 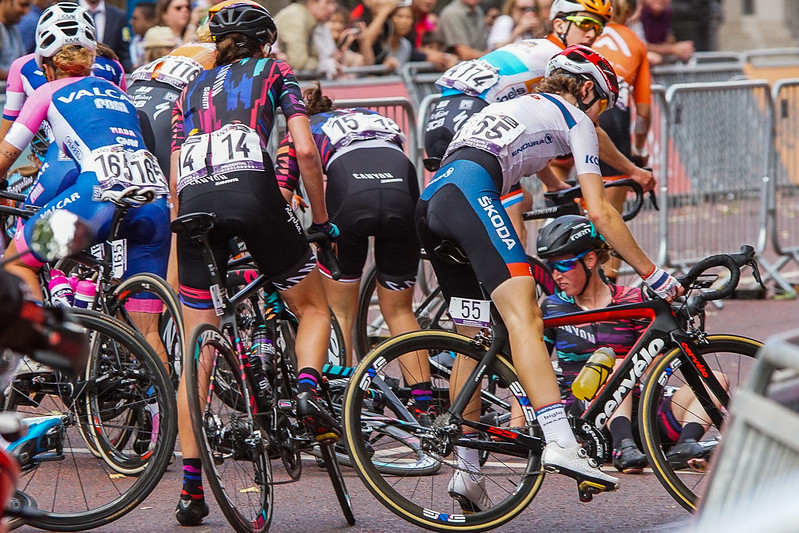 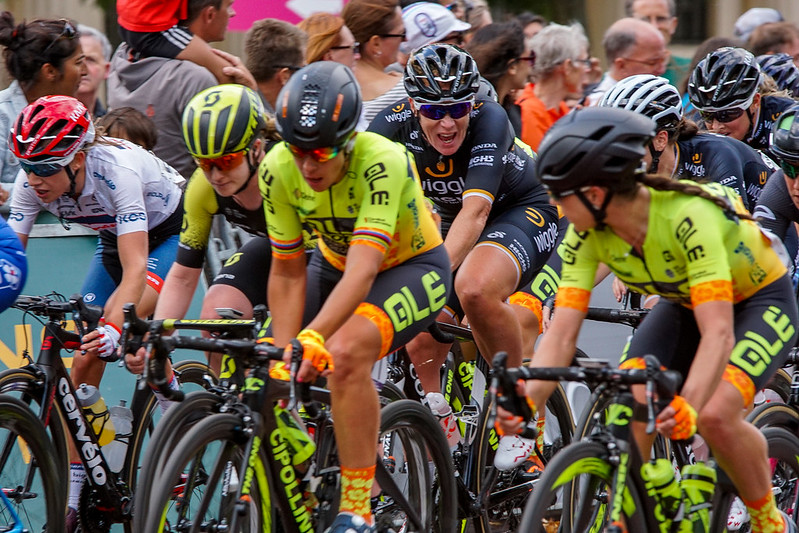 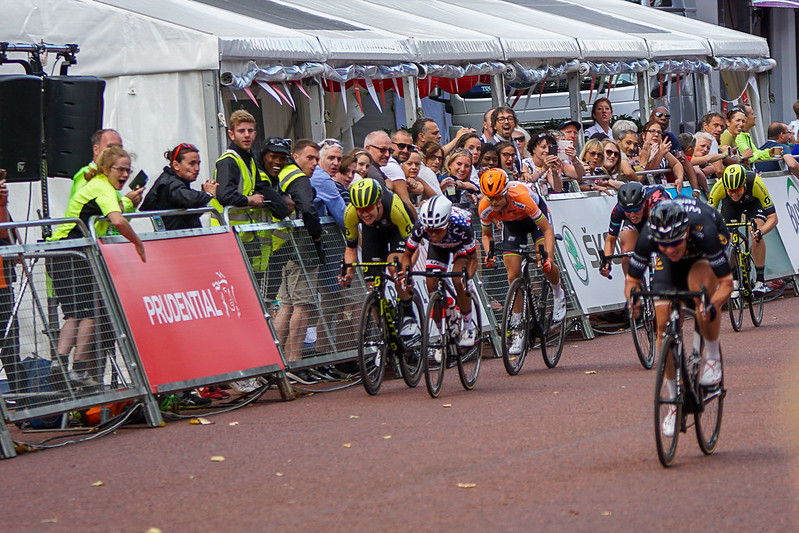 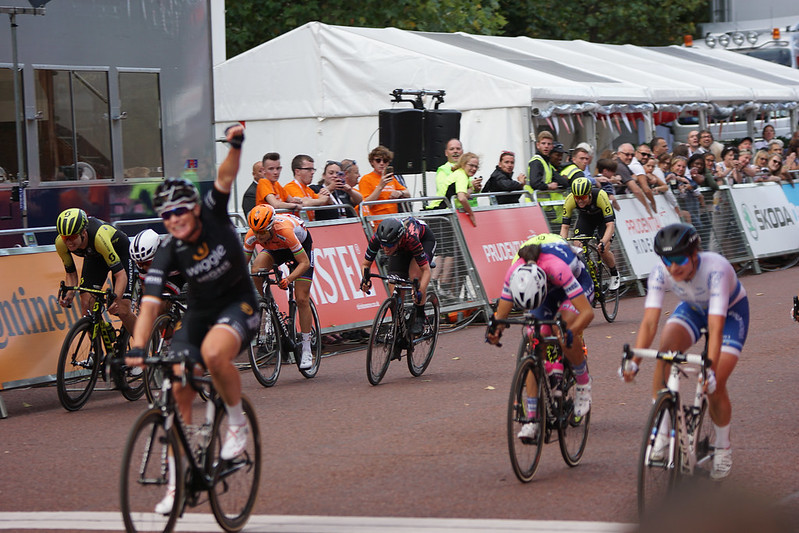 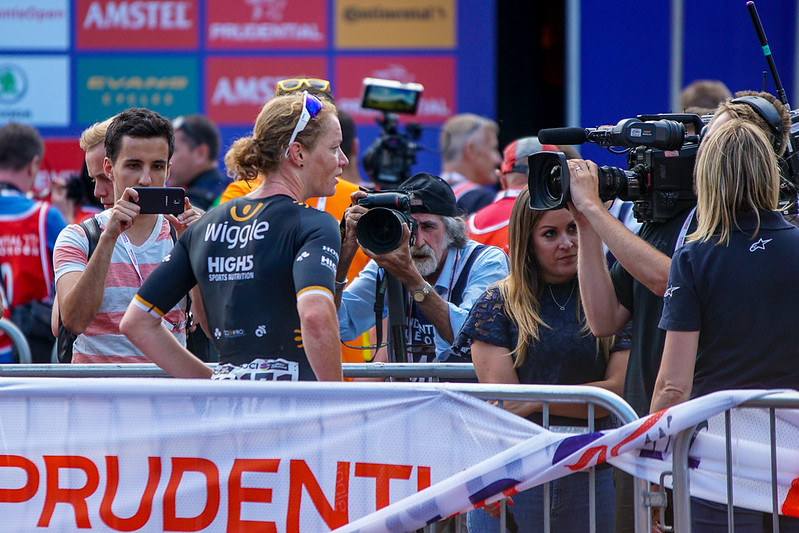 Previous Story:
Geraint Thomas Wins the Tour
Next Story:
The Death of MoviePass?