Space for Audio: The Internet and Streaming Radio 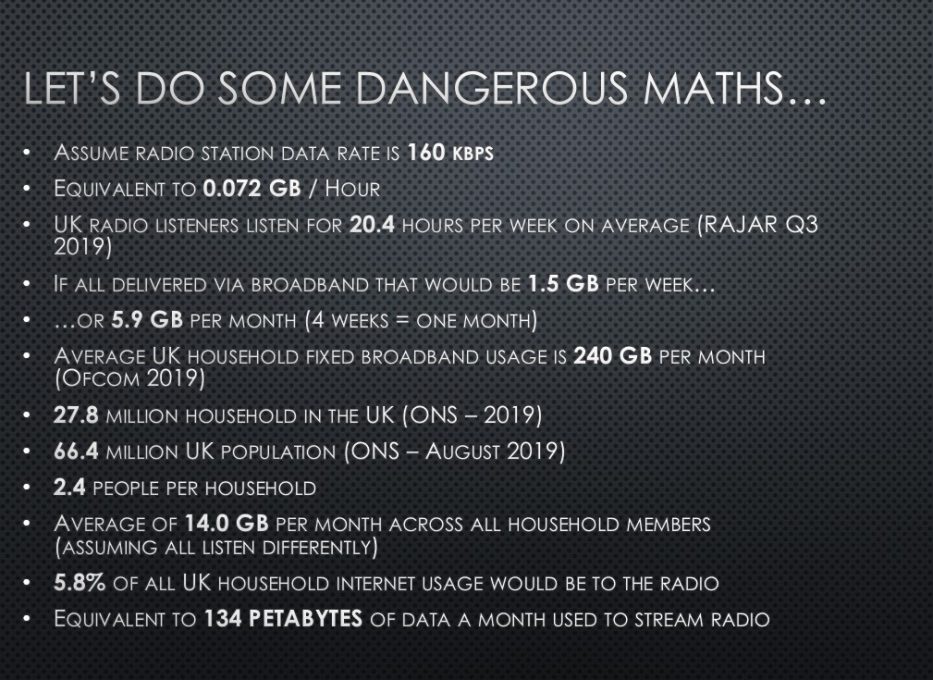 Yesterday I was a speaker at this year’s Radio TechCon conference, and took part in a “debate” about the future of broadcast radio. If there had to be one platform for radio in the future, which would it be? DAB+, broadband or 5G?

Obviously this is not a true representation of the options. Nobody is yet planning to shut down analogue radio, let alone switch everyone from DAB to DAB+. And there’s a fine line between broadband delivered via wires to our homes, and broadband delivered over the air from base stations.

But I was speaking the case for broadband – and I was interested to test an assumption that was made at a previous radio conference: that the internet could not cope with all radio listeners switching to streamed radio.

Back in 2009, I attended “Radio at the Edge” a conference exploring potential futures of radio.

A speaker at that conference said the following in a speech:

[The internet] simply can’t cope with the simultaneous levels of listening that radio demands. For example, at 8 o’clock on a typical morning, there are about 17m people listening to the radio. But the entire UK broadband infrastructure could only support simultaneous listening for about 4m of them – even if no-one was using the internet for anything else, anywhere in the country. And the costs would be enormous – hundreds of millions of pounds a year for the radio industry – and more for the ISPs. Any kind of IP technology that we either have today or even have sight of today, just can’t match up to broadcast radio.

A lot has happened to the internet in the last few years. We’re definitely getting faster speeds, and with the advent of things like 4K video, consumers are demanding more.

So I did some quick and dirty calculations using available data to see if what was true in 2009 was still true in 2019.

Now there are many assumptions there, and I’ve wildly mixed sources to come to this figure. But given what we know about the internet, and the vast volume of data used by the likes of Netflix and YouTube, global internet volumes have increased substantially in ten years.

Obviously, this ignores mobile usage, which would definitely form a part of things. And as another TechCon speaker from Arqiva pointed out, when there are lots of cars in a traffic jam on the motorway, all trying to use the same mobile cell-site, things still do break down (He noted that this is because of a relative handful of individuals streaming video – I assume in the backs of cars).

But looking forward a bit, in researching the piece I presented it was interesting to learn that Cisco forecasts that by 2021, UK IP traffic will reach 10.6 Exabytes a month, which would mean, in a hypothetical all-streaming world, 1.3% of UK IP traffic could be radio.

What was even more interesting was another Cisco report that forecast that by 2022, the world will be using 4.8 Zettabytes of data a year, up from just 1.5 ZB in 2017. That’s a 300% increase in just five years.

For what it’s worth, I did also briefly explore the major issues about the 7% of households who don’t have the internet, and those that can’t get it – usually because of their rural locations. Any service that becomes 100% internet delivered is absolutely disadvantaging the poorest, the elderly, unemployed and those without the technical skills needed. And that’s always worth understanding.

Previous Story:
The Night Fire by Michael Connelly
Next Story:
The Premier League in an SVOD World – Running the Numbers