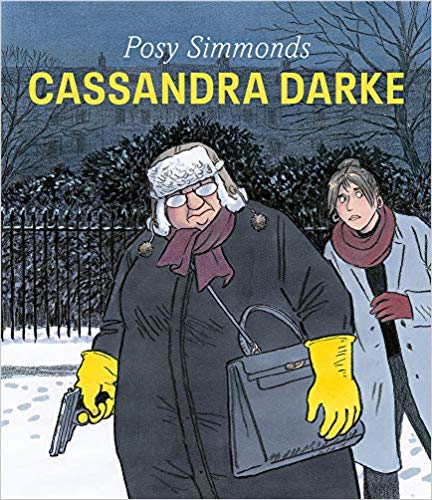 I’ve had a copy of Cassandra Darke sitting around for about a year, without having really picked it up to read until now, and there’s absolutely no reason for this. It’s great.

Posy Simmonds is the author of a series of literary themed graphic novels with perhaps Tamara Drewe (a retelling of Far From the Madding Crowd) and Gemma Bovary (based on Madame Bovary) being her better known works.

Cassandra is a very priviliged woman. She runs her late husbands gallery, selling works including sculptures to a discerning clientele. But she is not a nice woman, treating those around her with disdain. She lives in magnificent house in a nice Chelsea square, and has another home in France. She also manages to sustain three staff.

Against her better judgement, she lets her step-sister’s daughter Nicki – her late husband had long ago left her to marry her close friend – stay in the downstairs flat.

The story shifts narratives from Cassandra to Nicki at times. But Cassandra is at the heart of the piece, and early on we discover that she has a big secret, and not everything in the gallery that she runs is at it seems.

Meanwhile a new relationship that Nicki has begun sees some very unpleasant characters enter their lives.

The story is told sparsely, and I couldn’t help thinking of Cassandra as a Scrooge-like character – a reasonable proportion of the story is set in December. She looks down on most people – muttering asides to homeless people on the street, and sometimes treating her staff with disdain. A young assistant in her gallery can no longer work with her.

Simmonds’ illustrations are superb, driving the story, and having delightful asides. She draws her protagonist as a squat character – reminding me to some extent of cartoonist Giles’ grandma.

You’re never entirely sure where the story is going, since the first thing we read is a newspaper clipping reporting the discovery of a woman’s body in some woods, while the story is told largely in flashback.

Previous Story:
The Premier League in an SVOD World – Running the Numbers
Next Story:
Blue Moon by Lee Child