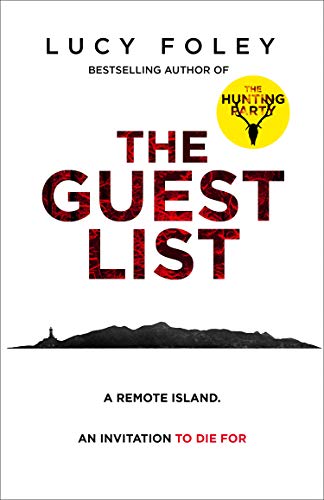 Lucy Foley follows up her very successful and popular whodunnit, The Hunting Party, with a new take on the closed-circle of suspects genre. Like her previous work, The Guest List is great fun.

The setting this time is a remote Irish island, where online magazine editor Jules is getting married to TV outward-bound presenter Will in what she hopes will be the wedding of the season.

Not messing with a winning formula, again Foley jumps around, relating the narrative from a variety of participants at the wedding, from the bride herself, to the wedding planner, the best man, a friend of a friend (“the plus one”) and her step-sister amongst others. And as with the previous book, we jump between two timelines – the leadup and events of the big day, and the period when “something” has happened. As the story progresses, the two timelines collide.

As with The Hunting Party, the attendees at this wedding a mixture of sympathetic and particularly unsympathetic characters. Many of the men, including the groom attended the minor public school “Trevs” where they took part in sometimes unpleasant proceedings. All of this is bubbling under as the guests arrive for the wedding.

Meanwhile Jules is trying to put out of her head, a note she has received warning her than her husband-to-be is not the man she thinks he is. She’s a driven woman, successful with her online magazine, and after a relatively short engagement, is going to be marrying her Bear Grylls-wannabe husband.

This is a pacey read – with chapters jumping between perspectives, and the story never really slowing down for too long. The format might be classics, but the concerns and issues it confronts are cleverly put together and mostly succeed.

It’s fun, and keeps you guessing most of the time, delivering a satisfying conclusion. A very entertaining book.

Thanks to Harper Collins UK and Netgalley for the ARC. The Guest List is published in hardback and ebook formats on 20 February 2020.