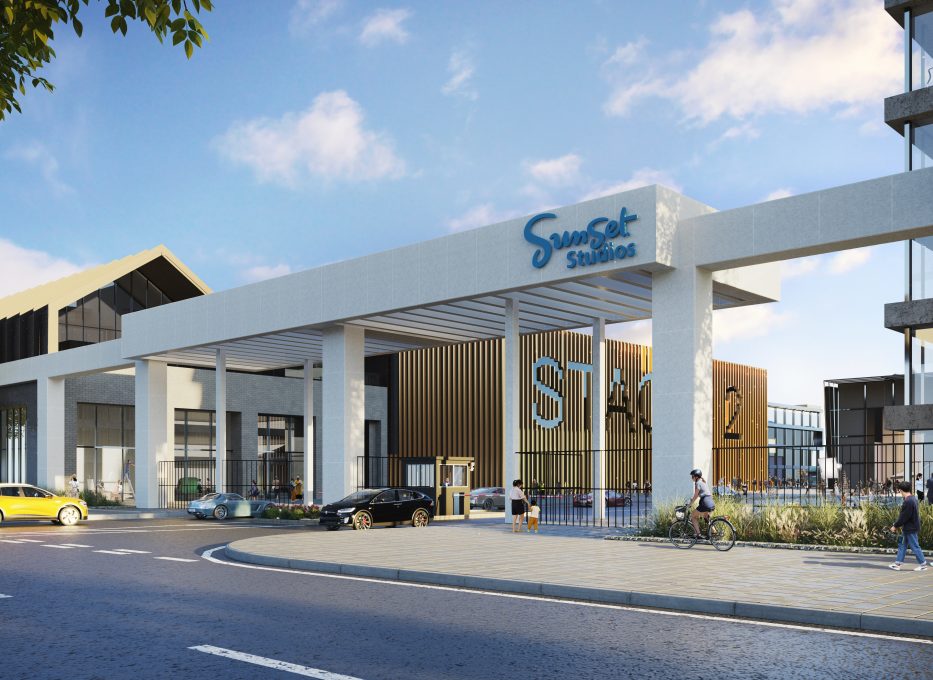 This morning came news that the UK, and London in particular is going to be home of a new film studio.

Specifically, Blackstone Real Estate and Hudson Pacific Properties have found a spot 17 miles north of London in Broxbourne to site their new studio facilities that they claim will see £700m invested, and bring 4,500 jobs and £300m annually to the local economy.

I’m always interested to hear about such things. So where are these new studios to be? ‘Broxbourne’ is what it said in the press release.

That’s pretty close to me, although I tend to think of Broxbourne as a commuter town sitting right on the River Lea Navigation. Is there really space for a film studio? Where exactly in Broxbourne is this enormous site?

The press release and news reports were annoyingly vague. We just had the PR artists’ renditions (see above), but no real details in any of the news reports I’d seen.

So I headed to the local council’s website, and saw another news release there.

Land to the west of Waltham Cross has been purchased by Blackstone real estate funds and Hudson Pacific Properties for a new centre for film, television and digital production. This will be the partners’ first expansion of their Sunset Studios platform outside of the United States.

The 91 acre site, close to M25 junction 25, is allocated in the Borough’s approved Local Plan 2018 – 2033 as a strategic employment site. This development will be a significant investment to the area creating over 4,500 permanent jobs and many more during its construction. It is expected to contribute more than £300million to the local economy annually.

There are a few clues there:

“Land to the west of Waltham Cross” puts it much closer to home, and ties down the location much better.

I dug out the Local Plan and found a map of the borough. Here’s the most obviously relevant bit of that map:

Waltham Cross is to the bottom right of the map, and the purple areas all labelled “ED2” are considered Employment Areas.

Based on being west of Waltham Cross, that means PP1, PP2, PP3 or PP4 on the map. PP3 and PP4 seem a bit small for a 91 acre site, and in any case, there’s the enormous Newsprinters facility in the middle there. This is the printworks owned by News UK and used to print a large number of the UK’s newspapers including The Times, The Sun, The FT and the Daily Telegraph amongst others. It’s massive.

So by my reckoning PP1 or PP4 were the likeliest candidates.

Currently, based on looking at Google Maps, both sites are mostly agricultural, and probably need to lose their Green Belt designation.

Some Google searches reveal a 2018 plan to bring a business park to Maxwell’s Farm West, while Rush Meadow also had some plans attached to it – it’s the small section at the southern tip of the green fields in the map above, that is cut-off by a road. It looks like the plans for Maxwell’s Farm West morphed into plans for a data centre that are still very much alive.

‘Park Plaza West‘ might sound like an upmarket hotel just off Central Park in New York, but is in fact an area where developers had been hoping to locate a major headquarters. The website describes the land as ’90 acres’ which matches the area of the new studios, and the site sits right by the Junction 25 of the M25, meeting the A10.

They even have a helpful aerial view of the site.

The site is bounded by the M25 along the south, the A10 to the east and B198 to the north (a dual carriageway despite being a B-road!).

To the west lies Theobald’s Park. More specifically a camping and caravanning park (curiously within close earshot of the M25), “Birch” which describes itself as “Your escape from urban living” but is basically a country house hotel (When I was a kid, it was home to an adult education centre and we got visit it for nature outings. We got to handle snakes and things like that on those school trips). There’s also the Western Charitable Foundation independent Jewish Orthodox cemetery. Just to other side of the M25 is Tottenham Hotspur’s training ground, and also my old secondary school!

London isn’t short of studio space, but it does seem to fill up given both the UK’s tax incentives for filming, and the growth of streaming. There are three sets of studios in Elstree a little further around London’s orbital, as well as Warner’s facility at Leavesden. To the southwest of London are Pinewood, Shepperton and Longcross.

And of course there are prospective plans for more. Even in the locality of this new studio, there’s the recently opened OMA Film Studios, less than half a mile from this site.

All of the developments will be subject to planning permission although it sounds very much like Broxbourne council are desperate to get it through. I doubt that Enfield Borough (just the other side of the M25) is unhappy either.

Previous Story:
The Olympics on TV in the UK
Next Story:
The Cult of We: WeWork and the Great Start-Up Delusion