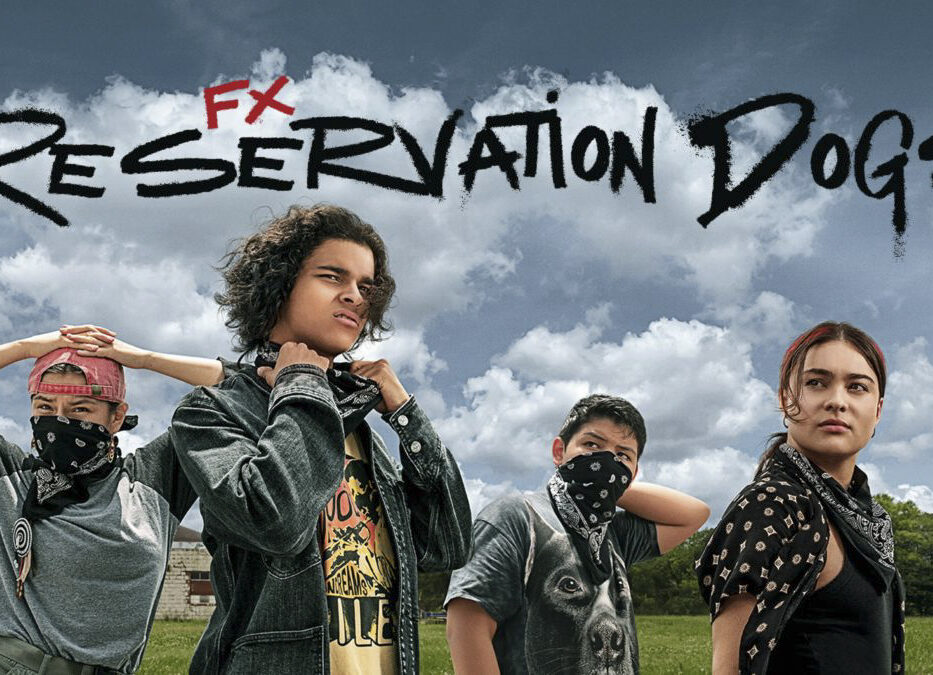 We’re only two episodes in, but the third and final series of Happy Valley is just wonderful. The lines that writer/director Sally Wainwright gives to her Sergeant Catherine Cawood are just delicious. And yet it’s all so natural. I am glued to this on Sunday nights.

When Reservation Dogs came to Disney+ back in 2021, I was a massive fan. Why a series about a group of youngsters who hang around getting involved in minor misdemeanours and generally have little to do, would appeal so much was a testament to the naturalistic performances, some very sharp writing, and an unusual setting. This was, incredibly, the first TV show written, directed and produced by Native Americans. What’s more, it was shot in Oklahoma, where the show is actually set – something too many series are very bad at doing.

The second season arrived in 2022 on FX in the US back last summer, but there wasn’t a peep this side of the Atlantic until a week or so ago, when the entire second season dropped largely unheralded on Disney+.

I can’t emphasise how good this series is. Again, we follow our group of characters, who are all dealing with the trauma of the knowledge that their close friend has taken his own life (this happened prior to the first season). Bear, who needs to find himself a job to earn some money; Alora who was last seen backstabbing the rest of the group by running off taking their California money and joining up with their “enemy” Jackie; Cheese, who is the wisest of the group and delights in things like finding a VHS of Big Trouble in Little China; and Willie Jack, the tomboy of the group who can also see them begin to fall apart as friends.

Then there are the “Aunties” – pretty much all the female adults in the series, Big, the local Native Policeman, and various other attendant regulars and elders that we run into from time to time.

The show isn’t afraid to spend an episode featuring a single character, and not show us any of the regulars. For example, there’s a wonderful episode in season two where the Aunties all go to the Indian Health Services Conference, considered the closest that they can get to a holiday. Sure, they have to attend a few seminars and lectures, but really this is about releasing themselves from their normal responsibilities, drinking and seeing if they can hook up with others. It’s a fantastic episode.

Then there’s the episode that features Cheese getting caught up in things when his uncle is arrested by the police for drugs offences. He suddenly finds himself thrown into the system and a care home, run by Marc Maron no less. It’s an incredibly moving look at how someone can just get “thrown away” like that, and the impact that in can have on someone.

There’s also a very funny episode where everyone attends the “Native American Reclamation and Decolonization Symposium Youth Summit” led by a couple of influencers who take everyone through the usual kinds of group games and team building exercises. The kids generally look down on them, but they won’t get their $15 fast food gift voucher if they don’t stick it out for the whole day. Again, beautifully written and performed.

Honestly, this is one of my favourite shows on television right now. The series has been renewed for a third season.

Slow Horses on Apple TV+ is also great. The second season has just finished and they’re shooting the next two now. It’s based on the Mick Heron novels, and because I dashed through the novel this second season is based on just ahead of the series starting, I actually recognised lines of dialogue lifted straight from the book. They do make a few changes, but in essence the two are very closely aligned. Gary Oldman is wonderful of the repugnant Jackson Lamb, while Kristin Scott Thomas is perfect as “Lady Di” Taverner. The entirety of Lamb’s team are perfectly cast, and it’s just a joy to watch.

Suddenly in the mood for some more spy TV, I thought I’d give Netflix’s Treason a go. It’s got a good cast that includes Ciarán Hinds, Charlie Cox, Olga Kurylenko and Oona Chaplin, all of whom I like. But this is awful.

I watched a single episode and became and as it went out my mouth fell agape at how badly plotted and written it was. The setup is as follows: Hinds plays the head of MI6 while Cox is his young-gun deputy. Kurylenko’s character dresses up as a waitress and delivers a poisoned drink to the head of MI6 leaving him close to death. This obviously leads to a massive crisis as you’d expect if someone attempted to murder the head of a security service.

As deputy, Cox’s character is given a temporary promotion to head of the service, and surely his first thing must be to discover who’s targeting his boss. (We’ll overlook how young Cox is to be head of the service). Obviously you’d expect it to be all hands to the pumps, but somehow Cox, his wife (Chaplin) and family all find time to go to the cinema rather than be working every waking moment tracking down a killer back in HQ.

Cox also receives a mysterious message to pick up some information. Leaving messages in vinyl behind the counter at Sounds of the Universe in Soho seems to be the way spies operate. Outside, he leaves his wife in the car outside and she gets suspicious. Could he having an affair? Or could it be that, er, he’s a spy?

Meanwhile the Americans come into town and Chaplin’s wife seems to be buddies with the head of their new operation unaware that there’s an operation on that she’s involved in. The head of the service may be close to death, but she’s worried about what her husband was up to in the record shop. She happily shares her suspicions with her “friend.” Are her suspicions right? Because Cox meets Kurylenko’s Russian agent secretly.

Somewhere along the way, it looks like Hind’s MI6 chief also has blackmail material against a judge.

At this point, the general preposterousness of the entire affair caused me to swear loudly and turn it off. I’m not sure that anyone could have slipped any more clichés into this hackneyed old mess of a plot. Utter garbage.

Netflix also had Kaleidoscope a heist mini-series (or “Limited Series” in Netflix-speak). But the USP of this particular show is that you can watch the episodes in any order. Right at the top, you are told you can dive around the colour-coded episodes, which each introduce themselves in relationship to the how long pre- or post- the heist they take place. Only the “White Episode” was specifically highlighted as being the final episode you should watch.

Although you could dive around, I watched them in the order that Netflix presented them to me, which was fairly randomised. So we jump from 6 weeks before the heist, back to 7 years earlier, then a few days prior and so on. There is even an episode set 26 years earlier (which requires some of the main characters to be de-aged to a not-altogether-successful extent), and even an episode set six months after the heist which you are still meant to watch before the denouement of the heist episode itself.

To be honest, the random order thing doesn’t really add a lot, and probably just requires the writers to keep introducing and re-introducing the characters each episode. In another format, the “many years earlier” stuff would have been introduced as flashbacks.

While the overall story was fine, and the performances, led by Giancarlo Esposito as the leader of the gang and Rufus Sewell as the owner of the vault they’re robbing, are good, the story was neither good nor bad. I guessed what had happened before we got to the big reveal, and the whole series could have been fewer than eight episodes. In particular, the 6 months later episode really didn’t work, and basically spoiled the final episode since we could already see that certain people were missing. Also, setting the final heist against a big hurricane hitting New York wasn’t convincing, and was achieved which much greater success in the 1998 movie Hard Rain with Christian Slater and Minnie Driver.