They say that if you don’t experiment, you won’t succeed. So let’s call yesterday an experiment shall we? 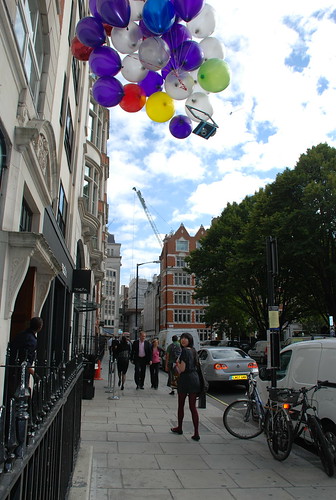 About a year ago, Photojojo – a great photography website – sent out a link to a balloon photography experiment carried out by a guy named David Trawin.
He basically attached helium balloons to a cradle that contained a digital camera. He then floated the camera upwards, retaining it with a kite string, and took some fantastic aerial photos of New York.
Photojojo republished Trawin’s instructions including a PDF of the cradle plans.
I’d been meaning to try this out for ages. And yesterday I did.
The first problem is finding a camera capable of taking lots of pictures remotely. Most cameras have some kind of timer feature, but it’s usually a single shot with a 2 second, 10 second and perhaps 30 second timer delay. If you’re lucky there might be a burst function that will take a couple of photos on the delay – useful for group shots. But taking more than a couple is difficult.
My recently purchased Canon G10 does do this (it was an insurance replacement for a stolen G7 – or otherwise I might well have waited for the G11), but it’s a bit expensive for something as precarious as this, and in any case it weighs a lot.
Examining lots of camera manuals on manufacturers’ websites revealed that pretty much none of the cheaper current cameras do this. Indeed only Ricoh seems to offer this functionality, but it’s hardly a bargain basement brand.
So my other option was to use CHDK on a second-hand Canon camera. If you’ve never used it, CHDK is a wonderful thing. It allows you to do all sorts of things with your Canon camera that Canon never originally offered, not least of which is the ability to take RAW photos on devices originally only designed to take JPGs!
But crucially, CHDK lets you run scripts, and in particular this script – an intervalometer. Once installed and running, I was able to force my camera to take a new photo every five seconds – perfect for something like this.
I needed a camera, and a visit to my local Cex saw me pick up a Canon A470 for £38. Ebay would have probably been cheaper, but I needed something in a hurry. A couple of lithium AA batteries and a 2GB SD card and I was ready.
I built the cradle using foamboard, balloons, some rubber bands to keep it attached, got a couple of lengths of kite string (one for attaching balloons to the cradle, and one for to control the whole device) and some helium. If I learnt one thing from this whole experiment, you’re much better off buying helium online than Clinton Cards.
Yesterday was Absolute Radio’s first birthday, and I was hoping to use some leftover helium from a celebratory balloons. I was planning to get photos of everyone at work at our staff party – so this wasn’t going to be out and out theft. But in the event, all the helium was used up for other balloons, and by yesterday morning, many of those balloons were a bit drab. By lunchtime, it was clear that I couldn’t “repurpose” those balloons.
So yesterday lunchtime my friend Emily and I filled lots of balloons and attached them to the cradle. We weren’t sure how many we’d need. I’d thought maybe a dozen, but in the end I used the entire cylinder which claimed to fill between 24 and 32 balloons depending on size. We’d got to about 28 balloons, and it still wasn’t quite taking off. This was very annoying. So near and yet so far.
So out to a nearby card shop where I bought four red foil balloons. Walking through Soho it looked as though I was about to propose to a girlfrend or something. We attached these additional balloons and it still wasn’t quite enough. Curses!
I thought we should probably go for it anyway, since a bit of wind would give them some lift. In retrospect, I think that fewer big balloons is better than lots of smaller ones. They all add weight and each additional balloon probably only added a cumulative bit of lift. Next time, I’ll get a weather balloon or something similar. A large number of balloons is also somewhat unweildy. Getting into lifts with them was interesting. 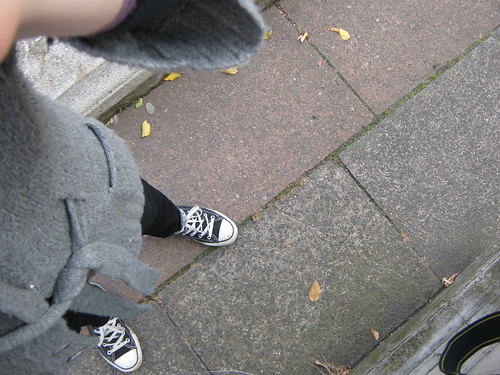 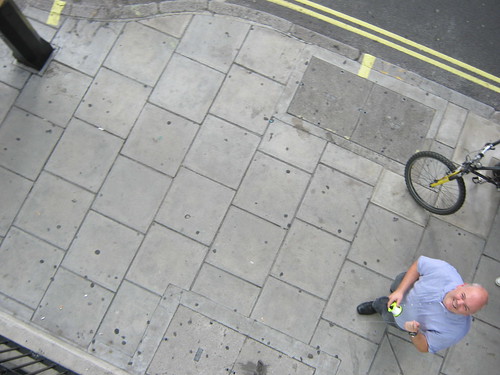 We went out into Golden Square to give it a go, and you can see some of the results below. It didn’t go all that high. The wind carried the balloon a little bit, but buildings and trees were getting in the way a bit. Emily took some photos of the attempts. 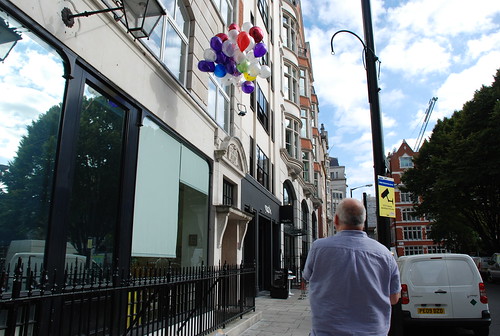 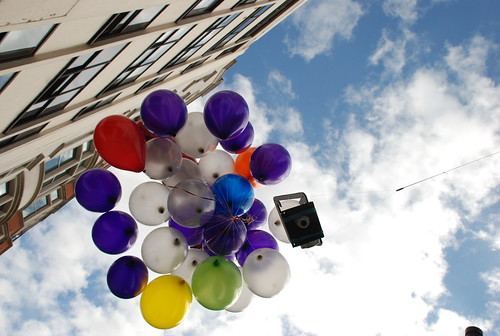 Never mind. Our staff party was to kick off in the roof bar of the Sanctum Hotel – perfect for a launch.
This is where things started to go wrong. It was certainly windy at the top which would help, but I was concerned that the hook that attached my control kite string to the cradle wouldn’t be sufficient. So I tied the string to it. In retrospect I discover that I wouldn’t get a badge from the Scouts with my knot tying ability.
Suddenly a gust of wind passed through and the balloons were off! Unfortuntely, my guide string wasn’t. The balloons and my camera had floated over the side of the hotel and beyond. 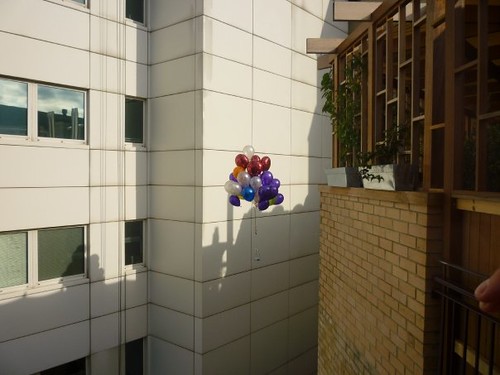 It was probably as well that the balloons didn’t quite give the camera enough lift. But they were still rising along the side of an adjacent building. After a little aimless floating, and much panic for me, the balloons got twisted around a fence on the rooftop of the building. 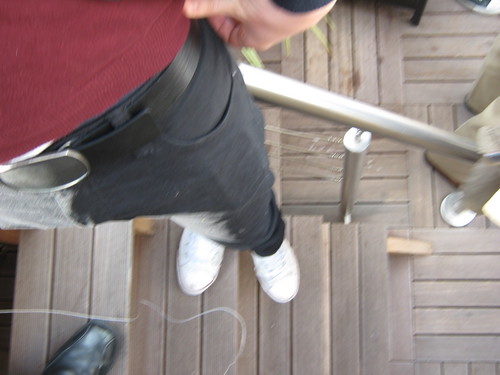 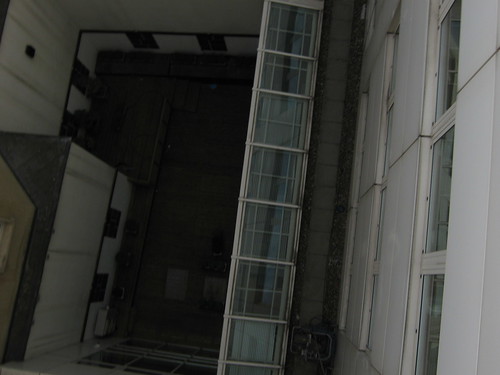 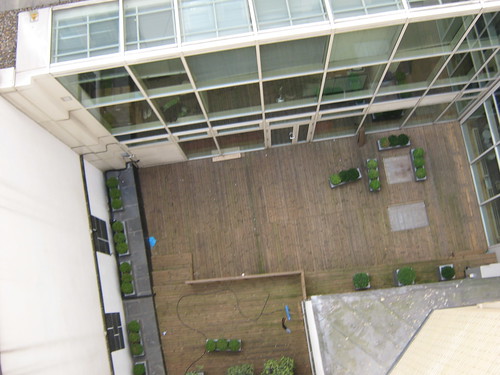 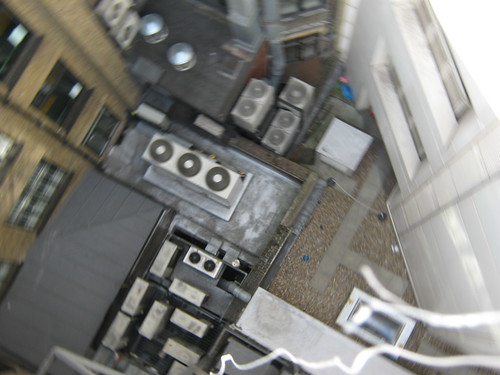 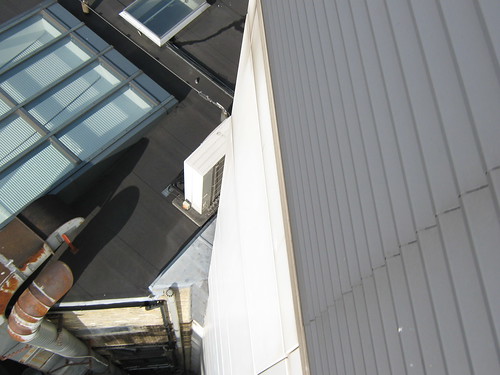 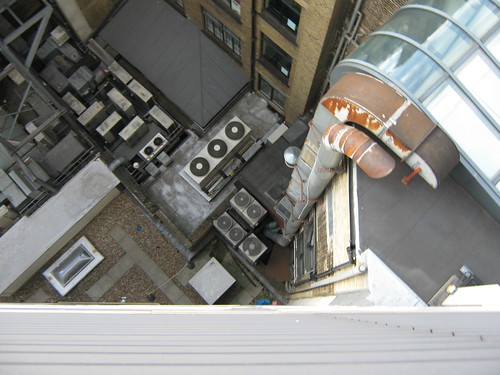 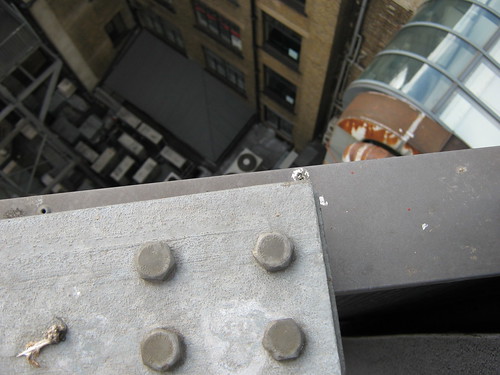 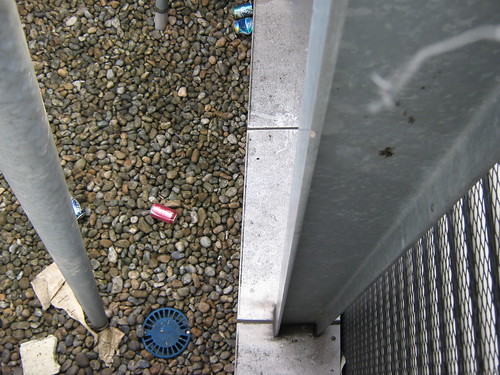 Great! Now all I had to was find the building (it can be very disorinetating on the roofs of strange buildings), get access to their roof and retrieve the camera.
Many of my colleagues from work were finding this all highly amusing and asking me if I wasn’t mad sending my digital camera skywards. I pointed out that I’d always known that losing the camera was a possibility, and that I’d bought it cheaply for that express purpose. They were also a lot more worried than I was that the camera would slip out of the cradle. But I knew that the combination of rubber bands and cradle should stop the camera slipping to an ignominious death. 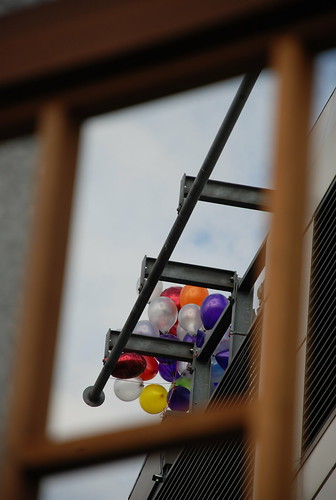 I quickly worked out which building it had got stuck on and hastened around to the front entrance of what turned out to be Sony Music (and Pictures). One of the more unusual conversations I’ve ever had at a reception desk then followed as I explained to the security guard on reception that I’d like to collect the camera and balloons that were currently entangled on Sony Records’ roof. A 21st century “Can I have my ball back” conversation!
Unsurprisingly he found this amusing. But his colleague knew what I’d been up to and had seen me in Golden Square a little earlier – well it’s hard to miss a man with about 30 balloons in his hand.
Heroically he left me in reception and went up to his roof. Minutes ticked by, and he returned with not only the camera, but the vast majority of the balloons! 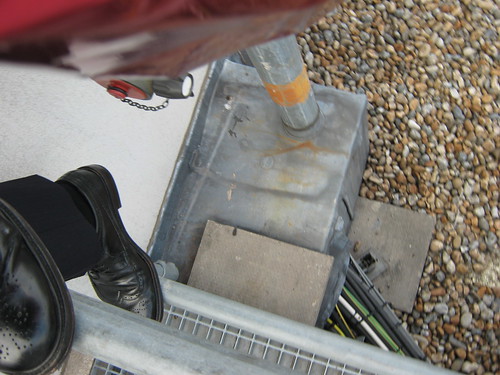 One was burst, and I was told he’d released a couple more has he untangled them. I thanked him, and as I was passing back outside a couple of ladies who worked at Sony asked me about them and what I was going to do with them. I’d decided that I’d had enough balloon fun for one day, and ended up giving them the balloons as they said they were organising a party (I later spied the balloons in an office inside the Sony building).
And so here endeth the experiement. Not wholly successful, but not unsuccessful either. I didn’t get the glorious London aerial photos I’d hoped for. But I’d got the camera back and it had floated – a bit.
There will be a next time, but it’ll involve a larger balloon and more (hopefully cheaper) helium. And I’ll do it somwhere in the wide open outdoors.
And beyond that, there’s an even madder idea – but I won’t get into that until plans develop…

4 Replies to “Aerial Photography: An Experiment”