The ZX Spectrum at 30 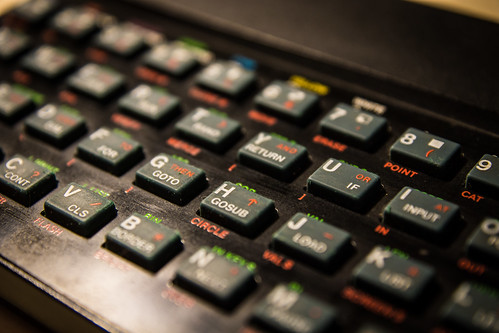 While sometimes you have to rely on Wikipedia or somewhere else on the internet to work out how old something is, that’s never been a problem with the ZX Spectrum. It came out in 1982, and you know that because the first thing you saw when you switched it on was “© 1982 Sinclair Research Ltd.”
The Sinclair ZX Spectrum was my first ever computer, and I used my savings to buy the 16k model in 1982 when it came out. Except I didn’t get it on 23 April 1982. There was, of course, a massive shortage of the machines, and it took me several months before I was able to buy one.
There was a 48k model too, but that was just too expensive for me. Most things I needed to do could be done in 16k, and for a long time that was all I needed. A friend also had a Spectrum, while another friend, who’d had a ZX81, quickly moved up to a Spectrum too. We were all Spectrum users. 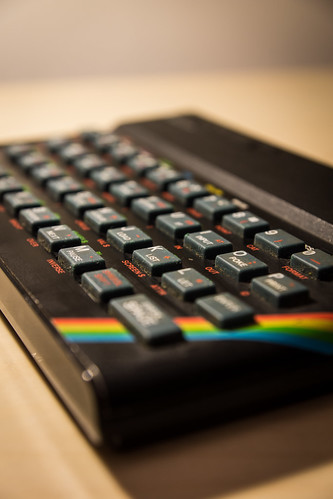 I did eventually send away my Spectrum to be upgraded to 48k. But that was a while later.
In the meantime, I taught myself BASIC – something we were learning at school anyway with first a predecessor of the BBC Micro, and then the archetypal school computers themselves. I read magazines feverishly – in particular Popular Computing Weekly which covered a variety of platforms, but also Personal Computer World and the various Sinclair specific titles, including Ashby-de-la-Zouch’s Crash magazine.
I spent hours typing in the code for the programs that were printed in these magazines. A painful exercise as invariably there would be large arrays of data that were simply numbers that you had to type in. Sometimes these would be hexadecimal numbers. I remember once spending hours error-checking some code that simply let my Spectrum play a Mozart concerto.
I would get the display computers saying stupid – but never rude – things in places like WH Smiths and Boots.
I bought books like Mastering Machine Code on Your ZX Spectrum and Advanced Spectrum Machine Language – that latter title coming from the software house that produced such programs as The Hobbit (I look forward to it being reissued with the film!).
I went to the ZX Microfairs in places like Alexandra Palace or the Royal Horticultural Hall, where a software company called Automata would do deals that seemed too good to be true. The same company had a long running cartoon strip/advertisement on the back of Popular Computing Weekly.
I bought a ZX Printer that only printed on a special thermal paper in a quasi cash-register style (and now we have a spate of not-dissimilar “little” printers coming).
I bought the astonishing The Quill (well a handful of us did together) and got into writing adventure games. I later bought The Illustrator, but never managed to get on with that.
I failed to get a game published in a magazine which was a shame, because they paid cash! However I had not one, but two games broadcast on LBC during Clive Bull’s Sunday afternoon Young London programme. The first game was, in truth, a digital wordsearch. But the key was always for the game they broadcast to be a competition listeners could enter. Yes, you heard right. LBC did indeed broadcast the “loading” sounds of 8 bit computer games. LBC’s rule was that the game had to load in less than a minute. Listeners could record the program off-air with a radio-cassette recorder, and then load it into their computer. LBC tended to rotate which computer platforms they broadcast. My second game was an adventure game written using The Quill, and I was proud to hear the following week that it had led to their biggest ever response for a game. LBC on at least one occassion went further, and broadcast an advert in a similar manner. Lots of pre-promotional spots featuring a Joanna Lumley voiceover threw forward to a Monday evening broadcast. The resulting program was essentially a mortgage calculator from some kind of finance company.
I would spend my pocket money on budget Mastertronic titles available either on the local market or in the local department store.
I ended up slowly doing less programming and more playing of games. Not least from companies like Ultimate Play The Game.
I would go around to a friend’s house where he had a modem, and parents who didn’t seem to mind him using their phone. We would go onto things like Prestel and learn things about phreaking – not that I ever really progressed beyond trying out engineering test modes.
And that’s really just the tip of the iceberg. I loved my Spectrum. And I still do.
The photos in this blog are of the casing of my actual 1982 Spectrum case. I later bought the Keyboard Upgrade Kit, so this shell remains empty. Although perhaps a Raspberry Pi might fit quite neatly inside. Either way, a return to a time when people could program themselves on a widescale, and not just rely on “developers” would be beneficial to the country in a big way.
Happy birthday to the ZX Spectrum.