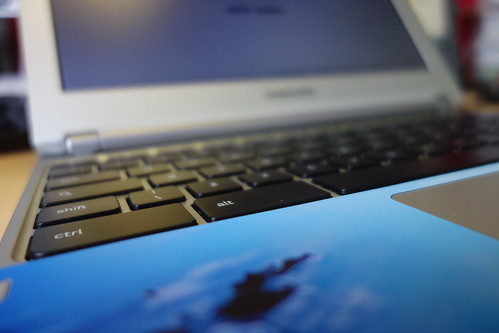 For the last few months, I’ve found myself carrying a full-size laptop around less than I did in the past, and instead using my Nexus 7 more and more. In many respects it’s excellent, and I would (and have) happily recommend it to anyone who’s looking for a 7 inch tablet. Indeed I’m convinced that this smaller form-factor is much the better size.
The Nexus 7 lets you read email, feeds, browse the web, read Kindle books, watch video and listen to music very easily.
But what it – and indeed any touchscreen device – is woefully bad at is any type of productivity. “Content creation” to use the parlance. I prefer “writing.”
You’re not going to type even a medium sized email on your tablet – unless you’re a little mad. Nevermind longer blog posts, essays, work documents or whatever. My Nexus 7 is fine for assisting alongside a presentation, but not for creating that presentation in the first place.
While I do have an Asus 30A which is a fantastic device and something of a pre-cursor to today’s ultrabooks, it’s not machine you’re going to take absolutely everywhere if you want to travel light.
So I decided I’d give a Chromebook a go. The most recent machines are remarkably cheap, and of particular interest to me, they’re super-fast booting up. From completely off to useable is less than 10 seconds. But frankly, for most usage you just shut the lid, and the device sparks into life instantly.
There are a few Chromebooks out now, and more promised soon. I plumped for the Samsung Chromebook WiFi (as opposed to the more expensive Samsung Chromebook 550).
I considered whether it was worth paying extra for a 3G model, but in the end decided that as this was something of an experiment, spending extra cash on 3G was a bit unnecessary. This was a good choice for reasons I’ll come onto.
There is a cheaper Acer Chromebook which has a hard drive, but I didn’t go for that model because it has a longer boot up time. And while it has more space onboard, the Samsung model has a longer battery life too. Plus, for extra space there are both USB and SD card slots for offline videos or music.
It’s hard to entirely divorce the Chromebook operating system, and Google’s software products from the actual device itself. But I’ll do what I can.
Hardware
The Exynos 5 Dual Processor isn’t going to win any awards for speed, but frankly, that doesn’t really matter. As long as it copes with websites, video playback, and lets you use applications like Drive, then you’re fine with it.
The screen is a different question. While the resolution is absolutely fine – 1366 x 768 on an 11.6″ screen – it’s not going to win any awards for brightness. It’s decidedly average, which is to say, worse than average. Little to no money has been spent on it. It’s fit for purpose, but nothing more. And it certainly doesn’t compare with the vividness of something like the Nexus 7 screen.
This was particularly noticeable in the Google “store” bit of Currys/PC World where I bought my device. Sitting next to it was the a demonstration model of the Google Pixel. The screen on that is gorgeous, with an incredible pixel density as well. The build quality looks amazing. But it’s £1,049 for essentially the same functionality as a device I bought for £224.
More concerning is the build quality. To be frank, it’s not great. While the device is very thin, and the designer has clearly “seen” an Apple MacBook Air, the budget was never going to extend to a brushed aluminium case. Instead, we get a rather poor quality silver case.
It’s really not very good though.
Just one ten minute walk the Chromebook in my bag without a neoprene case meant marks that couldn’t be removed on the top. I ordered a personalised skin from DecalGirl to cover the marks up – and generally personalise my computer more. If you’re the sort of person who covers their laptop lids with stickers anyway, then this probably isn’t important. 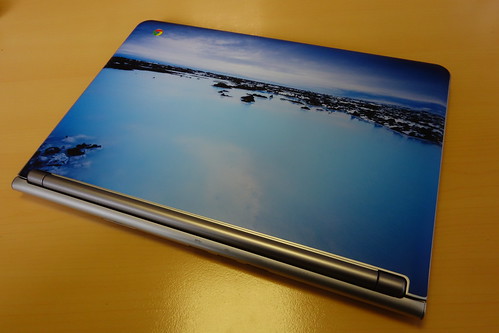 
Other improvements will undoubtedly follow in due course with updates to the Operating System. In the short time I’ve owned my Chromebook, I’ve had three updates. Google seems to roll these out almost weekly.
So would I recommend the Chromebook? A qualified yes. You need to know what you can and can’t do with it. And your needs will differ from mine.
This is not a laptop replacement. I’d despair if it was my main computer. But as a second (or third) portable device for writing on? It’s excellent.
I really do like the machine, and if you think that your productivity has perhaps suffered because you’ve switched to tablet from a laptop, then this is something to consider. If even a Tweet or Facebook status update feel a bit painful on the touchscreen keyboard of your tablet, never mind writing longer emails or documents, then this could be for you.
I’d suggest that, if it was a bit more robust, it could be useful in an educational environment. For note-taking in a WiFi networked area, it’s excellent.
But in general, if you just want a small machine that you can whip open at a moment’s notice to write a bit more of that work document, add another chapter to your novel, or get another few hundred words of your dissertation written, then you’d do well to look at this.
Previous Story:
In The House/Dans La Maison
Next Story:
Editorial v Sales

One Reply to “Samsung Chromebook”