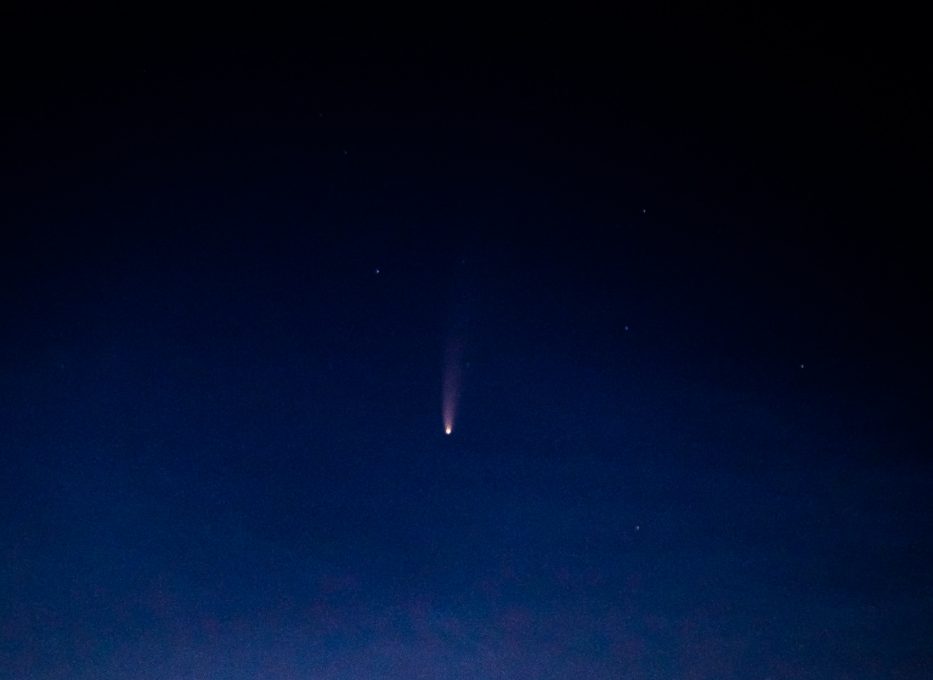 There’s a new comet in the skies, and it’s perhaps the most visible comet we’ve had for 25 years. Comet NEOWISE (or more formally, C/2020 F3) is so named because it was discovered by the NEOWISE space telescope back in March.

It’s now visible in our skies and is actually pretty bright if you go looking for it a the right time. Naturally, I wanted to see it, and this is a record of my last couple of days attempting to do just that.

Incidentally, it’s not too late to see it, and the visibility in the late evening should improve over the coming days. I suggest reading this piece at Space.com for full details, but here’s what I did.

My first attempt was very early Saturday morning. I knew that I needed to be up well before dawn. Locally dawn was at 4:55am, so I set an alarm for 3:30am… and slept through it. I woke up a little after 4:00am, and dashed out to observe. Note that I live at the northern edge of London, and I’m high up. The comet is relatively low in the sky, although you don’t need to be able to see the horizon. Nonetheless, I’m high up in north London too, so while a 5 minute cycle ride don’t get me clear of the London lights, it does at least allow me to get some good sight-lines.

The problem was that I was just too late. I spent a long time looking in the north-eastern sky (I would quickly discover that having a compass with you is handy. Phones can do this, but not my phone), but in the end, all I got for my troubles was a nice dawn photo.

OK. I would try dusk on Saturday night. The sun would set at 9.15pm and hopefully the comet would be visible in the sky if it was cloud free. But no dice. This time, the north-west sky would be better, and I was worried that it’d be too close to the horizon to see locally where I was blocked by trees.

I ended up doing some nocturnal exploring. In one location, I couldn’t see a comet, but did catch a barn owl (I’m pretty sure it’s a barn owl) that was out hunting.

That photo won’t win awards, as it’s not pin-sharp, but I quite like it nonetheless.

Incidentally, sometimes Flickr shows a lower resolution photo embedded here, so click through to get the full size and quality photos.

In another location I got a nice night sky, and bats! There was one bat flying back and forth all around me. But I had no chance of capturing that on camera. So here’s a pretty dusk shot instead.

I gave up for the evening, but did stop to photograph the City of London which was sparkling from my vantage point.

So it was now nearly 11pm, and I figured that I needed to be up no later than 3am on Sunday morning for my next attempt when again, skies should be clear.

Now it’s worth noting that while Sunday’s sunrise was due at 4:57am local time, you actually need to be thinking about the nautical dawn, which is some time earlier. My invaluable TPE app told me it was at 3:04am. That’s because the light of the sun arrives well before the sun itself. There’s a good explanation of the various types of dawn here (there are civil and astronomical dawns too).

I cycled out just after 3.00am, being awoken successfully this time, and almost immediately saw the comet!

It was pretty much due north-east (I’d been carrying a compass now), and was actually much higher in the sky than I’d expected. Somewhere over 10 degrees. If you hold you clenched fist out at arm’s length, thumb upwards, that’s about 10 degrees.

In fact, I later decided that it would have been better to arrive even earlier to get a good view, because as we entered nautical and then civil dawn, the comet faded from view. In the hour I was out, it completely disappeared.

My photos aren’t super sharp, my 70-200mm lens not really built for this. I was also using a 2x teleconverter giving me 400mm reach. In other words, to fill the frame, you do need a big zoom lens.

But just to be clear, this comet is very much viewable with the naked eye. A pair of binoculars will help, but as long as you have clear skies, it should be viewable.

There is a moon at the moment, but it’s not so bright as to drown out other things in the sky. I captured that as well.

And then as I was packing away, my phone pinged and my ISS tracker app said that the International Space Station was coming over!

So I hung around a few more minutes and took a couple of quick pictures of that.

I also tried videoing it passing over, but I had the wrong camera settings for the video so each frame is far too long. But you get the idea from this compilation of clips.

All in all, I was pretty happy with my early morning observations. I might try to go out and get some better quality images as I think the photos I’ve got are a little soft. I’ll probably remove the teleconverter next time.