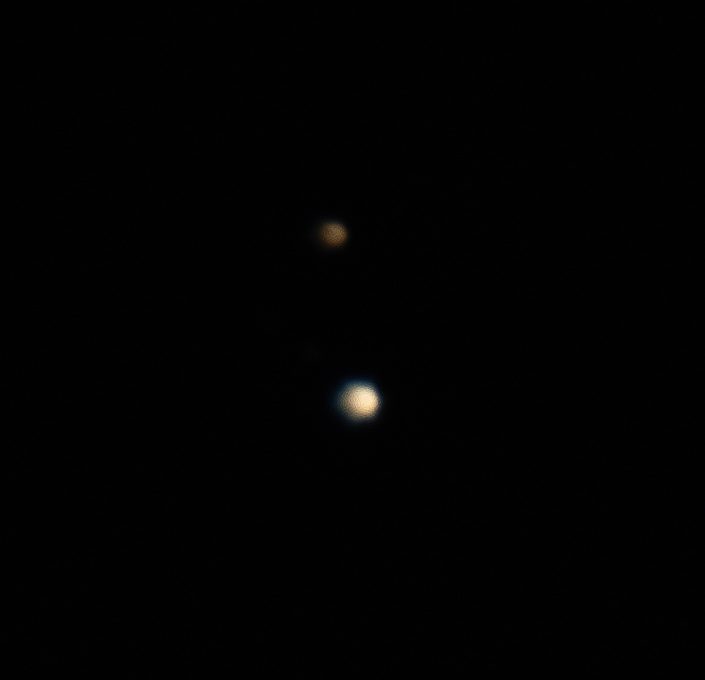 The above was what I managed to get earlier this evening with my DSLR, a 70-200mm lens, with a 2x teleconverter. Annoyingly, there’s also a lens converter in the mix, so this is a sub-optimal set-up with respect to the glass I’m using.

I’m also at the edge of London, so not exactly in a dark sky area.

Nonetheless, you can still see the yellow-ish colour of Saturn at the top of the image. My setup doesn’t let you see the rings, even though they’re perfectly visible from my location with a decent telescope.

The lower planet is Jupiter and maybe you can just about begin to see that there are bands around the gas giant.

I went out this evening rather than tomorrow because tomorrow’s weather looks awful. As it was, I was standing in a field for the better part of half an hour waiting for low clouds to clear.

This gives you an idea of things to scale from my position looking towards the SW – Central London being directly south.

My exposure here was too long at even 5 seconds, with the planets moving that fast across the sky.

Finally, I bumped up the exposure in Lightroom to see if I could see any of Jupiter’s moons. Again, there’s a real lack of sharpness, but while you can’t see Europa or Io which should appear just to the right of Jupiter and right of the planet at time of taking.

But there are two blobs that are Ganymede and Callisto.

Because of my poor optical set-up they’re not sharp, so appear much larger compared to Jupiter than they should be. But I’m pretty sure that’s what the image shows.

The Physics Dept at Exeter University put out a very decent live stream earlier this evening which I recommend. (It was watching this that made me look for the Jovian moons)

Previous Story:
It’s Different This Side of the Pond
Next Story:
Christmas Eve 2020 Radio Times