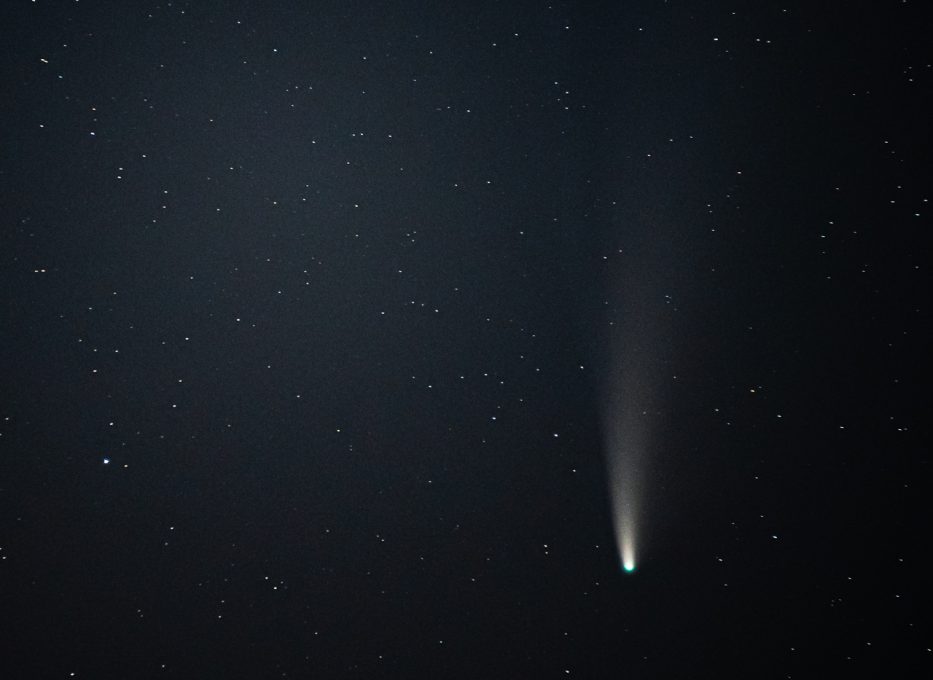 After a week of mostly cloudy weather, Friday night looked like it might be slightly clear. But I also wanted to find somewhere new to take pictures.

As it happens, I ended up where I was previously. I cycled over to a high point on a road near a local country park. But I was somewhat suspicious of a small number of cars parked up on the road there with their lights on. Probably not the place the hang around taking photos. As it happens, there was cloud blocking the way anyway, so I moved back to my previous spot, by which time the cloud had cleared to a large extent.

Although Comet NEOWISE is certainly visible to the naked eye right now, you really do need binoculars, a camera with a decent length lens or a telescope to get a good view. Particular when you’re battling city lights – and a nearby M25 motorway in my case.

I got a few more pictures anyway, and one thing I could help noticing was the number of satellites I caught in those photos. I think I caught three separate satellites, all by chance. They weren’t shooting stars, although we’re just entering the period when the Perseids become visible, peaking 12-13 August this year.

I wonder if the preponderance of satellites is related to the sheer number of Starlink satellites that Space X has been launching? There was certainly a massive concern is the astronomical society that these low earth orbit satellites, launched in very large numbers, will make observation much harder because we’ll have satellites everywhere in the sky.

It’s still not clear how long Comet NEOWISE is going to visible in our skies. But since it remains the best comet visible on earth for nearly 25 years, I’m going to look at it every opportunity I have!