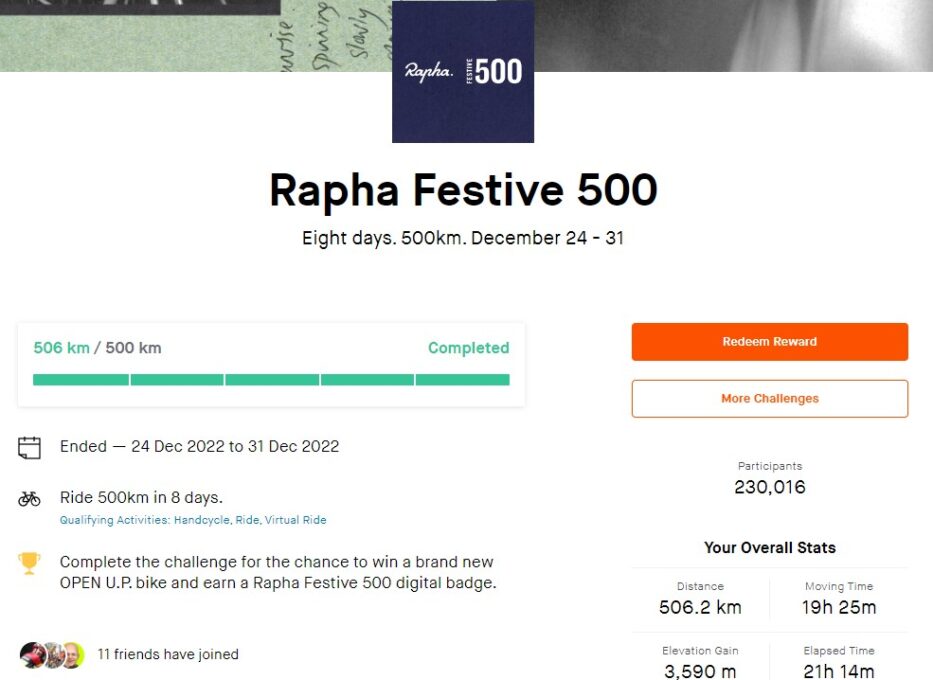 For the second year running, I decided to embark on the Rapha Festive 500 challenge – riding 500kms between Christmas Eve and New Year’s Eve. I’ve already documented a couple of this year’s rides. Here’s Ride #1, Ride #3 and Ride #4. I didn’t take a camera out with me for Ride#2, and while I did with Ride #5, it was deathly dull. So instead, enjoy a video of Ride #6. Note that for each of these videos, I tried to keep them to one minute to avoid fatigue.

This final ride was a 103km ride from Enfield up to Epping, then looping through the village of Much Hadham, passing through Watton-at-Stone before climbing through Essendon towards Potter’s Bar, and back to Enfield.

As you can see, it was raining fairly solidly throughout the ride. My GoPro doesn’t pick up the amount of rain too well, but the flashing of my front light makes some of the rain appear almost as snow.

Looking at the weather forecast, I could have done this ride later on the 30th or tried on the 31st, but the weather and especially the wind, looked worse later on. So I wore waterproof shoe covers, waterproof socks and lots of other waterproof gear. My feet obviously still got soaked – not helped by having to ford flooded roads from time to time.

There is some sun very briefly at the end.

In total then, it took me six rides to get to the 500km mark, with four of those rides just over 100km each. The other two were a Christmas Day short ride while everyone else snoozed (after I’d loaded the dishwasher!), and a short ride on what would have been a fabulous day for a bike ride, but for which I was mostly travelling.

The hardest part of the challenge for those of us in the Northern Hemisphere is the lack of daylight. Sunrise wasn’t until after 8am for this period where I was, which meant you couldn’t really even get a head start on things. And while I could have done some of the challenge on my turbo trainer indoors, I prefer to get out when I can.

I was riding solo, and I was average a bit under 27 kph which isn’t super-fast. But that’s on heavy, often muddy roads, with fairly bomb-proof Gatorskin tyres on my bike. In other words, you’re looking at just under 4 hours to do 100km. To put that in context, I would ordinarily expect to be closer to 30kph on my “summer” bike.

Fortunately, for the most part, I avoided really bad weather, although it was dirty enough that the washing machine was kept busy throughout the period. And you do need to factor in some time to perform basic bike maintenance between rides – like clearing the mud from your brakes and gears!

I didn’t suffer any mechanicals, and there were no punctures. (I did remarkably well for punctures in 2022, with just one between March and the end of the year!)

Mud guards are a must. I only have clip-on SKS Raceblades. In truth, something that would reach further forward to protect the front of the bike, and the front of me, might be a smart move. I use overshoes on all rides, as much as anything to keep my shoes clean. Fortunately it wasn’t too cold over the period, so warmth was overwise less of an issue. I use a Decathlon thermal underlayer, then usually a lightweight long or short sleeve jersey before a good jacket goes on. I swear by my Castelli Perfetto RoS jacket which is fantastic and did the job. Although in proper rain, that’s supplemented with a Gore Wear Torrent rain jacket as well, which isn’t their lightest fabric (that’d be the Shakedry), but packs up small enough for a jersey pocket and works perfectly.

I find I struggle most with cold fingers and I’ve tried everything. On a recent ride I actually went to a service station to “borrow” a pair of those disposable gloves they provide at the diesel pump. They acted as a third layer and yet I still had to defrost at the café stop before my fingers got enough feeling back in them to even unclip my helmet strap. I now keep some disposable nitrile gloves in my kit – useful for warmth as well as messy cleaning/repair jobs. A friend put me onto some Velocio Alpha gloves, which are lovely, but in no way cheap. However, while they’re perfect for most winter riding, even they have their limits. I’ve tried wearing under gloves with them, but they can still get wet. So my best bet has been some Outdoor Designs gloves made with Porelle. The gloves have fleece inner gloves, and then a separate waterproof outer glove. They’re made for winter hiking and climbing, and aren’t cycling specific at all. But they’re my best bet for constant cold rain. I’m so far undefeated in these gloves. The only real issue with them is that doing things on the touchscreen of your bike computer can be annoying.

Finally, I wear a Gore winter windstopper cap under my helmet which covers my ears, and there always a snood of some description that you can pull up over your nose if the cold really gets biting. (I do have some insane Gore balaclava thing which even covers your mouth and has a breathing area there, but I find it a complete pain to wear, and I don’t mind having my face exposed even in the coldest of conditions).

Finally, a good selection of podcasts, or even a nice audiobook works perfectly for those long solo hours on the roads.